This page details one or more prototype versions of Street Fighter (Arcade).

This early prototype of the original Street Fighter was added to MAME on May 1st, 2002. The audio CPU gives this a build date of March 1987, while the final game is dated July 1987. 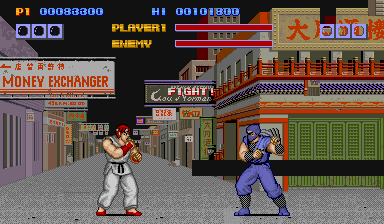 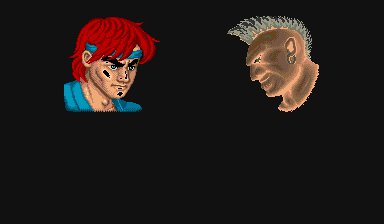 If the screens are viewed in the Scroll Test, the enemy characters will use their collect palettes.

Ryu went through a bit of a design change between this prototype and the final version:

These changes apply to almost all of his animation frames in the prototype, though the following animations already use his final design:

A few frames use a cyan color on Ryu's gi, a remnant from when Ryu's gi was blue instead of white.

Ryu's walking animation was apparently copied from Ken's and drawn over. In the prototype, one of Ken's walking frames somehow slipped through unchanged.

Ryu's right leg is bent in a different position while crouching in the prototype.

Ryu (and most other fighters) get little stub legs when they do a sweep kick in the prototype.

Ryu no longer attacks directly with his heel while jump kicking.

Ryu's jump punch is a mix of his final design (the top half) and the older design (the bottom half) due to the tiles being spread across two different banks.

Ryu's arms bend a little bit when he jumps in the final version. Probably a good thing.

Ryu seems to lose his neck when performing the Shoryuken in the prototype.

Ryu barely makes an effort to deflect damage taken in the prototype. Right on the chin. Not sure what's going on with his mouth, either.

Ryu's victory pose is different too. Let's just assume that the brown stuff under prototype Ryu's arm is just shading and not a giant patch of armpit hair.

Ken went through a fair number of changes too, but compared to Ryu, they're not much. In the final game, his hair is slightly longer, his pupil is twice as wide (it barely registers as a pupil in the prototype), and his armbands are shinier.

Ken's hair in the prototype seems to keep a consistent shape while walking, which can't be said about the final animation. Something went wrong there.

Like Ryu, Ken's right leg is in a different position while crouching. It's easier to see Ken's longer hair in these frames.

Ken has come down with an unfortunate case of stub leg.

Both of Retsu's jumping frames have slight differences, though the differences in the second frame are more noticeable - check out how his legs are bent between versions.

Retsu's jump kick stance seems a little reserved in the prototype, while in the final version, he's fully into it.

Retsu's intermediary ducking frame is barely different from his standing height in the prototype. A rogue pixel by his left arm was erased from the final sprite.

If you thought that Retsu wouldn't have the stub-leg, you'd be wrong. Another rogue pixel on the bottom-right of the second frame was fixed.

Even Geki has leg length differences.

Geki's teleport smoke was originally supposed to be yellow, apparently. It seems that they were already thinking of changing it at this point, because what would be the lighest yellow color is white, and what should be white is a dark gray color.

The same change can be found in the shuriken proper. This was likely changed to make them easier to see, which is a dumb move for a ninja, but smart for a developer. 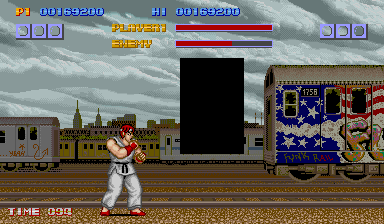 Joe is missing all of his animations, so he shows up as a black rectangle. His tilemap is complete at this point, it's just that the graphics are mysteriously missing.

Mike is missing his victory and crouching punch frames in the prototype. All other graphics are the same as the final version.

Lee's VS portraits are the only evidence of his existence in the prototype. The prototype Lee has a gray color scheme, as opposed to the rich blue outfit he has in the final game. The shading is in rough shape; His face isn't as detailed, and his cap uses a single shade of gray.

His defeated portrait is closer to his final design, with a teal blue color scheme. He's missing the top of his head, though.

Gen isn't in much better shape than Lee. His default VS portrait is a shade of burgundy, not purple, and his eyes are a strange yellow color. It looks like they started detailing his facial hair at the mustache and gave up when they reached his ears. His shirt has no detail at all except for the lighter color used to mark the neckline. A small tuft of hair on his forehead was removed from the final sprite.

Gen's defeated portrait is closer to his final sprite, though the hair still needs some work. His outfit changed from burgundy to plum in the prototype. There's an incorrect tile on his forehead that was fixed in the final version.

One of the colors in Adon's palette is an odd olive hue in the prototype. This was fixed in the final game to match the rest of his palette.

In the final version of Retsu's stage, there are more leaves blending into the roof tiles on the left and right sides of the screen.

Mt. Rushmore is in bad shape in the prototype version, with incorrect tiles all over the place, especially on the right side of the monument.

The sky in Mike's stage is brighter in the final version, and there's an extra layer of clouds at the bottom.

The sky in Lee's stage is a single shade of yellow in the prototype. The final version makes that color transparent and placed a yellow version of the sky background behind it. The outlines of the bricks are darker in the final version, and the brick floor is brighter. An incorrect tile in the upper-left corner was deleted.

The money exchanger shop is less purple in the final version, and the signs are brighter but more worn. The city streets changed from dark gravel to a brighter cement texture.

The sidewalk has a slight purple tint in the prototype - the final game changes this by taking some of the blue out of the sidewalk colors. The car is in worse shape in the final version, and the buildings in the back are more detailed. The final game adds an Ian Dury and the Blockheads poster to the left wall and graffiti of former Capcom USA VP Bill Cravens to the Blockheads pub. A blank tile on the rightmost building was filled in.

The VS graphic is shinier in the final version.

The Japan and USA flags are plain-looking in the prototype. The final game makes the colors brighter and adds a few folds to make them look like actual flags.

The other countries' flags have yet to be drawn in the prototype.

In the prototype's world map, the Atlantic Ocean is called "Western Ocean." 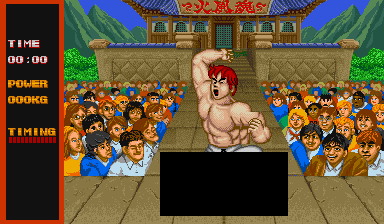 In the bonus round, the graphics for the roof tiles and the lower half of Ryu's body are missing in the prototype.

As mentioned before, the prototype just has a rough outline of the second bonus stage in the ROM. The timer would go in one of the black boxes, but it's not clear what would have gone in the other one.

The name entry screen is pretty simple in the prototype, lacking the two tigers and ornate border seen in the final game.

Ryu is consistently misspelled "Ruy" in his round-winning text.

The text for winning the match uses the wrong names in the prototype: Ken uses Ryu's text, and Ryu uses Ken's text.

China is incorrectly spelled on the country flag screen in the prototype.

All but one audio track (the high score entry music) and all sound effects were redone in the final version. There are no voice clips in this build.

The VS. music doesn't play in the prototype when the two-player mode starts. This was fixed in the final game.

Sounds 24 to 26 are used for the plane taking off, flying, and landing on the world map. They were all replaced by a digitized sound of a plane in the final version. Sound 0C isn't used in the prototype, and it's not clear where it would have been used.