A tie-in to the 1994 live-action movie, Street Fighter: The Movie (The Arcade Game) was Capcom's attempt to compete with the popularity of Midway's Mortal Kombat series in the U.S. by outsourcing development to the makers of Time Killers and BloodStorm to make a digitized fighting game featuring the cast of the movie as fighters. The results? Well, there's a reason why this particular Street Fighter spinoff never got the Champion Edition treatment, to put it lightly.

Press Down + Start + Weak Punch + Weak Kick at the same time on the character selection screen. If you input the code correctly, you'll hear a short chant. This works in one-player or Versus mode. 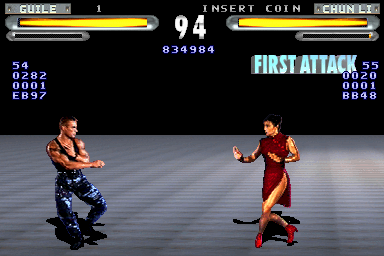 The stage (which does not display a name in the Versus screen) is a bare level with a floor against a black background, with several values shown on the screen.

The number of times this room has been accessed is recorded in the audits menu as SECRET 4.

Although they were created at the same time as the other characters, Blanka's digitized sprites were not used in the arcade version of the game (at least not in playable form), only appearing in the home versions released for the PlayStation and Sega Saturn. However, if you beat arcade mode with the normally-unplayable "Super Bison" by hacking the character select value to 0x11, Blanka's ending sequence will play instead of Bison's. 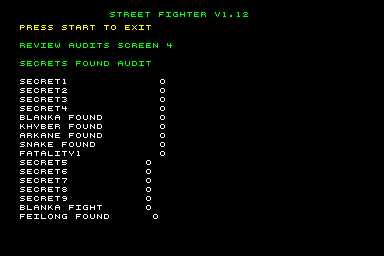 Taking a cue from the Mortal Kombat games, the developers of Street Fighter: The Movie added some red herrings, possibly to try to stir rumors: 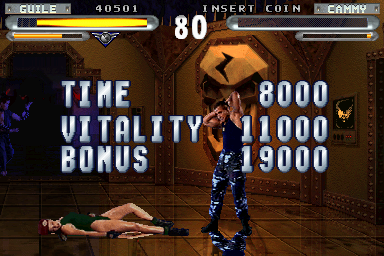 The Japanese version is the only one to show the bonus points scored after a round is over. Other versions simply skip to the next round or fight. It does have its issues, however. For example, this appears even when the player loses a round, and you do get points for it, and the points that you get sometimes may be based off of the CPU's stats. Another thing is that, upon using a continue, this screen disappears entirely.