Super Street Fighter II: The New Challengers was the entrance to another era of Capcom by not only making yet another entry amongst the vast amount of Street Fighter II iterations but also moving on to their next arcade system board, the CP System II (CPS-2 for short).

More notably, it added four new fighters to the roster: T. Hawk, Dee Jay, Fei-Long, and Cammy, with only one of them really staying in the public eye.

Large and small name labels for "Sarah". Given that this game notably introduced only one new female character, it could be assumed that this was an alternate name for Cammy, though whether it's an early name or one intended for certain game regions is unclear. Also, no "1P vs 2P (Character) Wins" announcer quote can be found for this name.

A slightly different subtitle graphic with no "The".

Following in its predecessors' footsteps, the new impact sprite for Ryu's souped-up and redrawn Hadoukens also disappears before its last frame of animation is shown.

Three incomplete sprites of a kick animation for Cammy, no finished equivalents exist.

Separate, unfinished versions of Cammy's heavy punch sprites. The pose was tweaked for the final sprites.

A few instrument samples exist in the data but go unused by any of the game's songs.

All these differences were also carried to Super Street Fighter II Turbo in their respective regions.

Some of the new characters' moves have different names:

Cammy's Shoryuken Motion + Kick move's is named Cannon Spike in the Japanese version and on international versions, it's Thrust Kick.

Dee Jay's projectile attack is Slash! in Japan and Max Out! elsewhere. 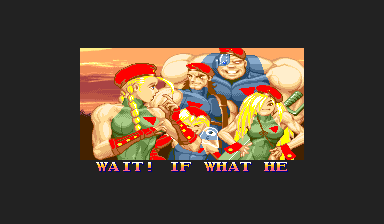 Due to a glitch, Cammy's ending on non-Japanese versions abruptly cuts off the text on a certain part, although the complete text is in the ROM.

The missing part was restored in Hyper Street Fighter II, but with a comma instead of ellipses.