Street Fighter EX Plus comes home to PlayStation, with two mainline Street Fighter veterans Sakura and Dhalsim joining the battle and a CG/FMV ending sequence for every featured character. 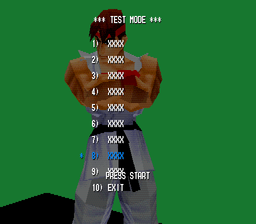 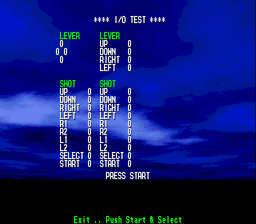 Use the following code to display a debug menu; the menu appears like an arcade operator test menu, except text other than Exit have been dummied out.

Press Start (while still highlighting option 8) to enter an I/O TEST menu, which works like an arcade input test menu, although it does not test for face buttons.

In the Japanese version, Doctrine Dark's throw move will have him place an explosive on the opponent's throat, causing them to be lit on fire when it explodes. Similarly to Street Fighter EX, his throw is replaced with a more generic backwards toss in other regions.

An auto save option is exclusive to the Japanese version, but is missing overseas.