Street Fighter III 3rd Strike: Fight for the Future is the third and final Street Fighter III installment. Chun-Li returns to the series, along with newcomers such as Remy and Makoto. Also notable for including a hip-hop soundtrack in collaboration with Canadian rapper Infinite.

Welcome to the world of Street Fighter III. 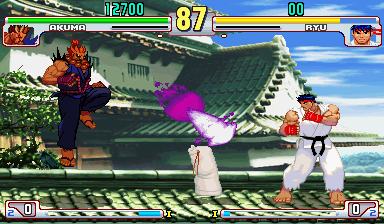 A leftover from 2nd Impact: set $2011387 to 0F to select the more-or-less functional Shin Akuma. He is surprisingly complete, apart from being unable to perform normal Akuma's Kongo Kokuretsuzan Super Art (due to both of them not having that Super Art in 2nd Impact).

Shin Akuma may freeze in place temporarily when performing his Messatsu Gou Shoryu Super Art. This often happens when both fighters are near the corner.

When he wins a match, Shin Akuma's win screen will show Chun-Li's portrait but with Akuma's nametag and win quotes.

It's possible to complete the game entirely as Shin Akuma and doing so will earn you Akuma's ending. The only strange thing that will occur is having to fight Gill twice, a possible leftover result of Akuma having Gill as a sub-boss in 2nd Impact (Ryu was his final boss there).

By setting the game's region value to 0x9y, with 'y' being the actual region's number, the game will put itself into an unused and unfinished widescreen mode. This mode existed in both of 3rd Strike's predecessors (though it was unused in New Generation), so it's likely a leftover from those two games.

Graphics and gameplay-wise, any sprites that were made with the normal screen size in mind (like the background to the character select screen) are still placed directly in the middle of the screen. Stage elements, like trees, tend to break, as parts of them will unload after they're passed. Characters start off in normal places. The invisible walls that stop players from moving too far away from each other during gameplay are still in the same places, unlike the past games.

Select Gill by setting $2011387 to 00 to find these unused displays in the Super Arts selection. The third spot, which is supposed to be Seraphic Wing, is simply blank except for the III marker. Regardless of which one is selected, all three Super Arts will be usable.

Announcer: You need to practice more!

Most likely meant for when you did badly during the "Parry the Ball" bonus stage.

Announcer: Don't you want a rematch?:

Was meant for the Continue screen, similar to the one in Marvel vs. Capcom 2.

Infinite announcing that one of your supers is ready, it was replaced by the "L-Let's go!" sample.

Urien: You've got no chance!:

Obviously meant to be played when Ken does his third Super Art, but it goes unused and instead he just grunts.

Unused Gill line. Possibly meant as a round winning taunt or for his Resurrection super.

Technically not unused, but it is impossible to hear without hacking or playing the console versions to select Gill. While this was a common post-round taunt in New Generation and 2nd Impact, he doesn't say this line in 3rd Strike normally, you can only hear this line during the "Parry the Ball" bonus stage while playing as Gill. The line still has a chance of cutting out before he finishes it though, so that may have been the reason why it remains unused.

(Source: Rage Quitter 87 for a majority of these audio files)

Much like in the last installment, Urien's Time Over defeat animation on the Japanese version has him strongly grab his arm, to the point of hurting himself and bleeding. The blood was removed in other versions.

The name of the car that appears on the "VS" screen prior to the first bonus stage is different depending on the version. In Japan it is called "4WD", but overseas it is called "SUV". 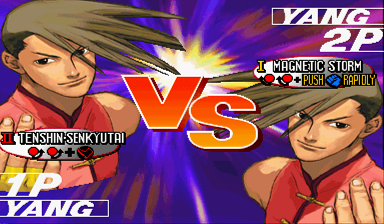 The PlayStation 3/Xbox 360 Online Edition port is based on a modified 990512 build that fixed the Ken/Makoto throw bug while retaining the unblockable moves.