The logo is different for each region on the title screen.

In the main menu, the Japanese version uses the same illustrations that were used in the sales flyers promoting the original arcade versions, while the Western versions uses the art used for the American flyers. Since Alpha 2 Gold was never released for the arcades in the US, the cover artwork of Street Fighter Collection was used instead. The regional differences between the default games themselves are the same as they were in their original arcade ports.

The Japanese version of the game offers more arranged modes of play than the International version. Unlock conditions for the games are as follows; 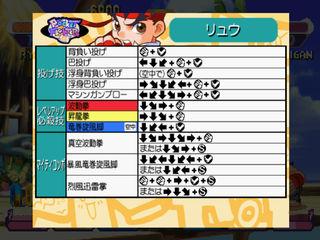 The Japanese version includes in-game character movelists for each game, which can be brought up by pausing in the middle of gameplay.