This game marked the time in the series when the once seemingly impossible happened: Capcom moved on from making re-releases of Street Fighter II, finally!

It features new combat elements, Final Fight characters on the playable roster, and an intermediate story to SFI and SFII. 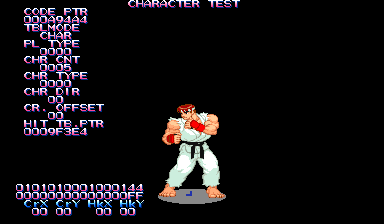 To activate a character test menu, set FF8001 to 0A when in the test menu. Setting it during gameplay or attract mode can cause the game to lock up, blackout, or throw ADDRESS ERROR/ILLEGAL INSTRUCTION messages, similar to the messages appearing in Mega Man: The Power Battle. 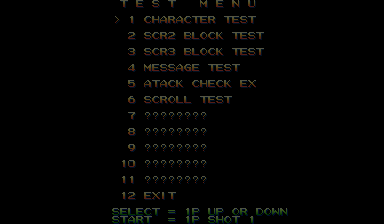 Setting the value to 06 instead (while in the test menu), or pressing both players' Start buttons, causes the game to lock up at the test menu's main mode. The other listed features are SCR2 and SCR3 BLOCK TEST, MESSAGE TEST, ATACK CHECK EX, and SCROLL TEST. They probably would have worked similarly to the ones in X-Men: Children of the Atom.

The Japanese version has a description for the Manual mode on the character select screen, like the Auto mode also does. On the international versions, the box is conspicuously empty instead.

This game marks the first time that the demon-looking Ryu/Ken head swap character's name would be mentioned in-game (although it was also mentioned in other media after Super Street Fighter II Turbo). Gouki in Japan and Akuma elsewhere.

In the Japanese version, Sodom's quotes are the most unique in the cast because he speaks by saying some English words together and forming seemingly nonsensical sentences that sound like Japanese words. For international versions, the uniqueness of his dialogue was taken out and turned into normal quotes.

Here, Sodom's win quotes are structured by what he says, and in parenthesis is what he thinks he's saying.

The Japanese version gives gameplay advice at the bottom of the Continue screen. As usual of Capcom, these tips were completely taken out in international versions.