Marvel vs. Capcom: Clash of Super Heroes is the third game in the famous Versus series of fighting games from Capcom. It's best known for including characters from Capcom's whole universe instead of just Street Fighter, although most of said characters got replaced and evolved into so-called "Special Partners".

The roster needed a renovation, anyway.

Much like its predecessor, this one has an unused ending that appears if you beat the game with Onslaught, the final boss. However, it is a bit more difficult to show in the game as normally just playing as Onslaught results in the game soft-locks out once you face Onslaught as a boss. In order to see this ending, set FF3052 to 22 (to make the first character Onslaught) and FF4080 to 08 (to set the current stage to 9, one past the final boss).

Once you clear this stage, this ending will appear, possibly a leftover from a location test. It shows the rest of the Marvel and Capcom characters standing in the cliff with the moving stars from the attract mode of the game along with Captain Commando's ending theme, but the stars can be sped up more if you press any button. The Japanese one literally translates to "Marvel VS. Capcom is currently in production!!!". Much like the previous game, the English version of this ending was left untranslated in the Hispanic region ROMs.

In the actual game, this text was changed to "Special Partner", so probably this was used in a location test version of the game. 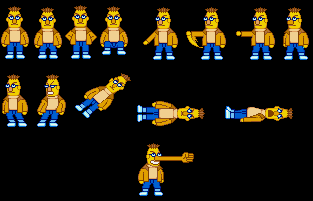 Unused assist character! His name is Tomichin, and he is a caricature of one of the game's designers. He was originally going to appear in Marvel Super Heroes vs. Street Fighter in place of Norimaro. From the looks of it, Tomichin would drop down and do a quick punch, although he has what appears to be another attack where his fist-shaped nose would extend out to hit the opponent!

The Rockman 10th Anniversary logo is mixed with Mega Man's victory poses, with his head fitting inside the 0. Maybe it was planned to appear in place of Light's hologram alongside the birthday cake? Note that the palettes are incorrect, and the correct ones have yet to be found. There's also the lack of a "Mega Man" variant for international versions of the game.

Since there is no random select option in the game, this goes unused. It was possible this was used in the location test versions before all the characters were in the game, though.

This kid would have been in the bathtub stage, but he goes unused.

Announcer: "Thank you for playing!"

Originally going to be said in the location test ending (see above).

Tomichin was an unused assist character (see above).

Onslaught: "You shall be the first to fall!"

Strider Hiryu has different logos on the character select screen depending on the region. Also, Mega Man is known as Rockman in Japan, in case you didn't know this already.

The announcer says a couple of names differently at the character select screen. The technique added to this game where you call both of your characters on and control them at the same time has a different name depending on the version (Variable Cross in Japan, Duo Team Attack in the US). Mega Man's uppercut special move has him yell "Rock Upper!" in the Japanese version and a generic grunt in other versions:

If you win a fight with Mega Man, sometimes Dr. Light appears in his win pose. In the Japanese version, Light actually speaks in Japanese, either congratulating his creation or offering him a cake. His lines were removed from other versions of the game, although they were restored for the PlayStation version. Here are the unused sounds:

Mega Man also has a win pose where Roll runs on with flowers and says "Omedetou (Congratulations), Rock!" in the Japanese version. Her line was cut from other versions of the game.

Captain Commando has a move where he can call on one of his three teammates to perform an attack. in the Japanese version, he actually calls the name of his teammate out (Sho! Jennety! Hoover!), whereas in the US version he just says "Come on!". His teammates have different names in the US version (Ginzu, Mack, and Baby Head respectively), so maybe Capcom forgot to get Takashi Nagasako (Captain Commando's voice actor) to also say the US names. 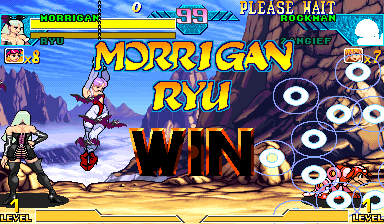 Morrigan has a win pose exclusively in the Japanese version (hold MK after you K.O. an opponent) which was removed in the international ones: a tied-up Lilith descends from above and Morrigan changes into a dominatrix-esque dress that reveals her backside. In the International version, holding MK will go straight to her HK winpose (Morrigan laughing and dancing).

Oddly enough, this did appear in international releases of Marvel vs. Capcom 2!

Sound-wise, the Asian version (for Asian countries that are outside of Japan) removed several Japanese lines from each Capcom character for some reason (possibly due to South Korean law forbidding the use of Japanese voices in the media at the time). The Japanese lines were replaced by a generic grunt or some other English line but otherwise remains silent. This region follows the same changes as both the American and European versions.

Roll has her own theme song "風よ伝えて" with spoken lyrics in Japanese, which was a remix of her ending theme on Mega Man Battle & Chase. The Asian versions replaced this with an instrumental version without vocals. Roll's taunt is also replaced with a short vocal sample.

Translation: "Leave it to me!"

Translation: "I fight for peace!"