Marvel: Ultimate Alliance 2 is an action RPG released in 2009. The PSP version is actually a port of the PS2 version (albeit with a few exclusive characters and downgraded graphics), which itself is a slightly different version of the same game on PS3 and 360. Gotta love late 2000s multi-platform games. 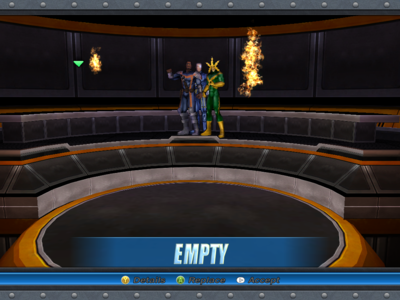 In the files are character select mannequins for Pro-Registration NPC Bishop, Anti-Reg NPC Cable, and the game's first boss Electro, indicating that they were originally going to be playable characters. Cable would later become a playable character in the Vicarious Visions versions (PS3, Xbox 360, PS4, Xbox One, PC) through DLC. (Please note the picture was made in the PC version of the first game).