Marvel vs. Capcom: Clash of Super Heroes is a port of the arcade original with several differences compared to it and the Dreamcast port, such as significantly fewer sprite frames due to the PlayStation's limited memory.

Similar to the Arcade version, Capcom intended to include a flashing effect in the PlayStation versions, as well as other particle effects. By default it is disabled, but players originally had the option to enable it on the option screen, before Capcom decided to remove it as an option altogether. Capcom probably removed it due to the epileptic seizures that occurred during airing of the Pokémon episode "PoDennō Senshi Porygon" in Japan just a couple of years before.

The option to enable it exists in the Japanese pre-release demo (SLPM-80508) of the game (which could be also be considered a prototype due to the fact Capcom were still working on it). Using a Gameshark code the inaccessible option screen can be accessed and the flash mode can be enabled. Then the game looks closer to the Arcade version by adding more effects and screen flashing. 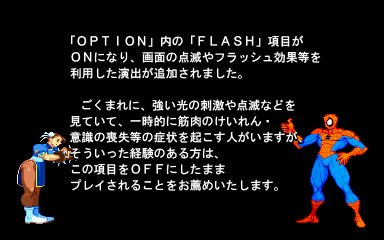 The image that appears after Flash Mode is enabled. The image exists in all PlayStation versions even though it goes unused. 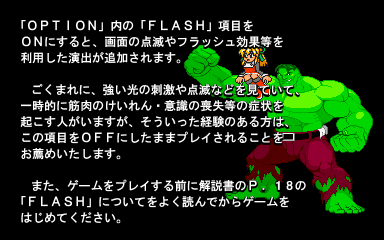 This is an alternative image featuring Hulk and Roll giving the player info about the Flash Mode, but it goes completely unused even after the option is enabled in the demo version. It looks like Capcom decided to use their Chun-Li/Spiderman version instead and left this image in the game files. From this it looks like Capcom were going to give a warning (on page 18) about flashing lights in the printed manual as well. This unused image also exists in all PlayStation versions (it even exists in the demo version). 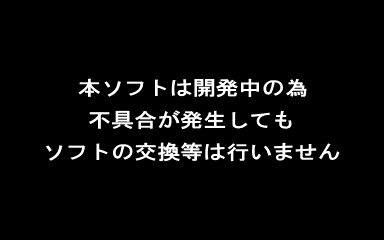 A leftover from the Japanese demo version, it still exists in all retail versions.