This page details prerelease information and/or media for Mario Kart 64.

The only known prototype build of Mario Kart 64 was shown at the Shoshinkai Software Exhibition on November 24, 1995, under the working title of Super Mario Kart R (the "R" standing for "Rendered"). While the game looked complete for the most part, there was still lots of content that didn't make it into the final game.

A Magikoopa, presumably Kamek from Super Mario World 2: Yoshi's Island, was originally planned to be playable before being replaced by Donkey Kong. It wouldn't be until 25 years kater in Mario Kart Tour, where Kamek would finally make his racing debut. 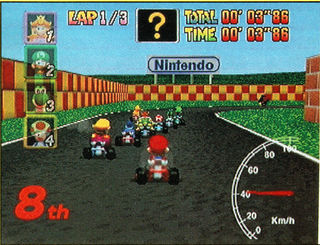 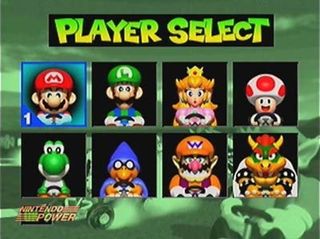 The Koopa Air billboards were originally Good Ear, but Nintendo changed them before release to avoid legal trouble with Good Year.

The 'Welcome' sign was moved further along the track, closer to the castle.

Beams with lanterns were added at various points along the boardwalk.

The title screen music was very different than in the final version, but this was probably a placeholder, the music being used in a Silicon Graphics tech demo.[1][2]

It was not uncommon for screenshots from different builds to be used in a single publication, so figuring out which build a given image is from can prove difficult, if not impossible. The images in this section may be from any build prior to the final release.

At one point during development, the Item Boxes were opaque black cubes with colored question marks on them instead of the more transparent, rainbow-colored box seen in the final release.

The Cape Feather item from Super Mario Kart was originally going to reappear, only to be scrapped in the final (it would eventually return in Mario Kart 8 Deluxe as a battle mode-exclusive item). However, the code is partially still within the game, and a cape feather sprite was found in the July 25, 2020 leaks.

The "Moo Moo Farm" gate was added, and the skybox appears to have been changed from an evening sky to a midday sky.

The railway crossing signs have been added.

Smoke emission from the train was added. 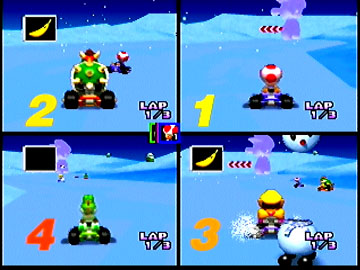 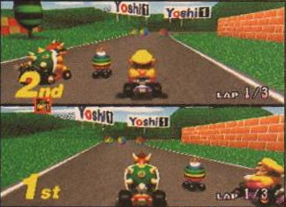 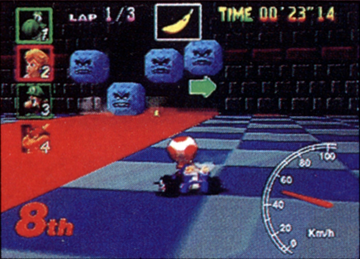 The second room in Bowser's Castle was going to have four Thwomps in front of the archway at some stage in the game. In the final game, the amount varies between one and three depending on difficulty.

At one point, the text 「バトルモード」 ('Battle Mode') was displayed on the middle of the screen during a match. Additionally, the item icons were positioned at the top of the players' screens rather than the bottom. 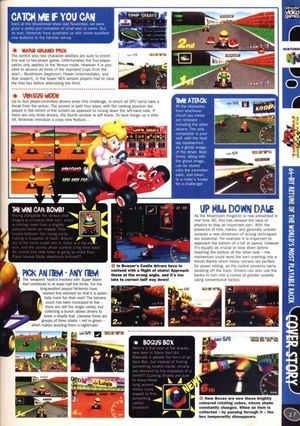 The Fake Item Boxes had bombs instead of upside-down ?s inside, and the Mini-Bomb Kart had colored stripes. The early Fake Item Box can also be seen in the Wario Stadium screenshot, and the feather is seen in a Mario Raceway screenshot.

The track order was originally different at one point.[3]

Retrieved from "https://tcrf.net/index.php?title=Prerelease:Mario_Kart_64&oldid=1063475"
Categories:
Cleanup > To do
Cleanup > Works In Progress
Games > Games by content > Prereleases