The Classic NES Series is a series of GBA cartridges with emulated NES ROMs slapped onto them. The carts are infamous for their screen crunch, making the sprites look rather ugly, with the most prominent example being "Hunchback Super Mario Bros."

Still, at the time, they were a decent official way to play NES games on the go (certainly less cumbersome than the e-Reader in that regard). 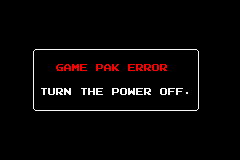 If the cartridge detects that it is pirated, the above error screen appears. Lower-accuracy emulators such as VisualBoyAdvance can also trigger this screen.