This sub-page details all the levels of World 4.

The corresponding tile on the level selection screen shows Poochy, but he cannot be found in this level.

This is the main Mini Battle test level, which has no equivalent in the final version. This level features ten huts numbered from 1 to 10, each leading to one of the Mini Battles. Entering any of them shoots Yoshi into the sky, after which the chosen Mini Battle begins. 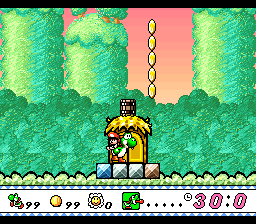 The Mini Battles that can be accessed in this level are as follows:

More info about these can be found on the Mini Battles sub-page.

This level also has a functional Goal Ring after the last hut: 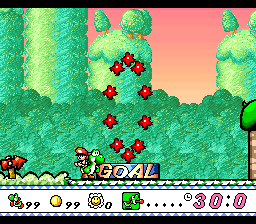 The first room in this level became part of 2-3: What's Gusty Taste Like? in the final game.

The background and palette are both completely different. The foreground palette doesn't really fit the tileset used here.

The lone Winged Cloud here was hidden behind three sand blocks and given a Switch to hold.

Another Winged Cloud containing a Flower over the first two sloped logs was replaced with a bunch of coin outlines.

The contents of the Winged Cloud after the two Fat Guys were changed from a coin ring to a Flower. The platform filling up the gap underneath it was also removed.

This U-shaped ledge was raised up in the final game. The rectangle of coin outlines after it was replaced with a row of regular coins.

The door at the end of the room was replaced with a pipe. A Shy Guy was also placed nearby.

The door leads to a short cave room with a Middle Ring, a Shy Guy, and some Fangs. Another door is located not far from the Middle Ring.

The hole in the wall that normally contains a Crazee Dayzee is absent.

Where a Winged Cloud containing a beanstalk would be in the final is a single-use brown spring ball.

A Piranha Plant on top of a poundable stake was replaced with a Cactus Jack. The two adjacent stakes were also made slightly taller.

A Stilt Guy near the end of the level was replaced with a poundable stake containing a Red Coin.

The first room of this level appears to be a test for jungle level assets. There's some monkeys with broken graphics here as well. 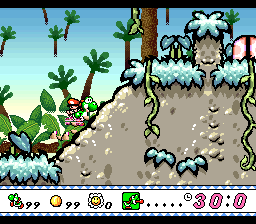 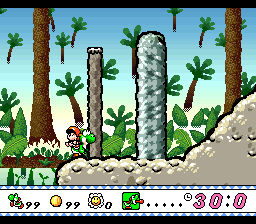 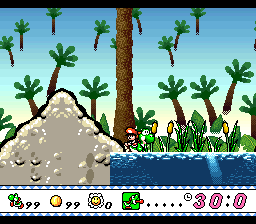 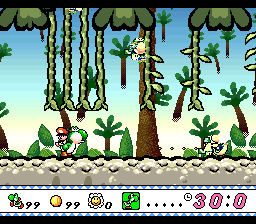 The background and Layer 3 images used here go unused in the final game.

The first door here leads to a flat room with... whatever this is, made of Lunge Fish graphics and other parts. It does nothing and cannot be interacted with in any way. 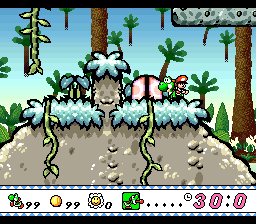 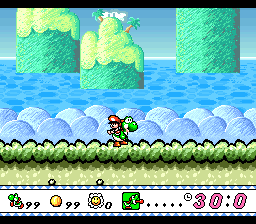 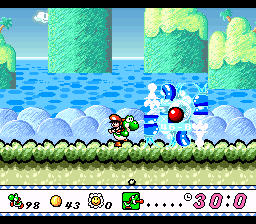 The second door leads to the Raphael the Raven boss fight! 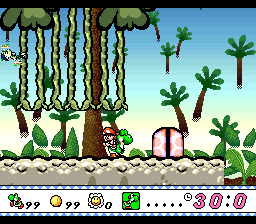 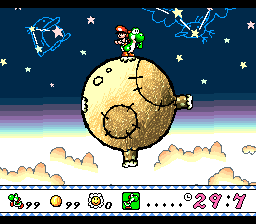 He won't fly up to the arena until Yoshi touches an invisible trigger located over one of the poundable stakes. 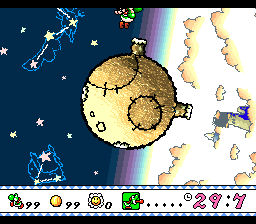 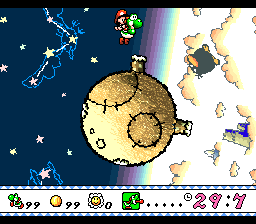 He can't damage Yoshi at all and will never use his shockwave attack, but is otherwise mostly functional and can be defeated. 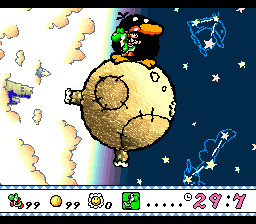 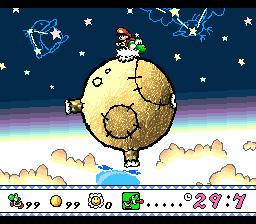 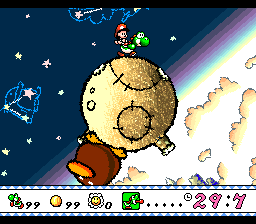 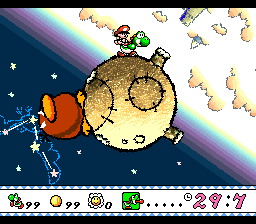 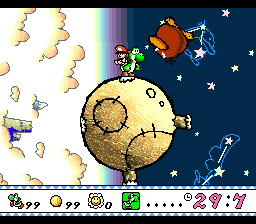 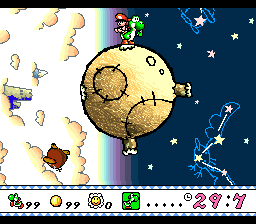 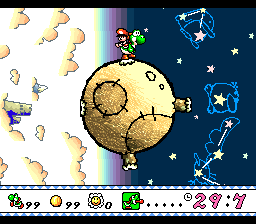 After Raphael is defeated, the only way to exit from the level is to press Start then Select.

The beginning of the level is completely different. The terrain is rougher and more naturalistic, compared to the final game's flatter, blockier terrain. There's also way more monkeys. Overall, it resembles the second room of the final game's 3-1.

The water section in this room was shortened considerably in the final, removing the floating platforms in the water, two coin blocks, a Spray Fish, several Cheep Cheeps, and a Georgette Jelly.

A paddle wheel is used to access the castle entrance. In the final, a Winged Cloud that creates a bridge is used instead. A tall, spiked ledge was also added to make entering the castle harder.

The castle entrance itself is made out of jungle blocks. The final game adds an invisible trigger that swaps into the castle tileset and palette. The shape of the entrance is also different, though in both the prototype and final game it appears to resemble the head of a frog with distinct protruding "eyes". The massive population of monkeys was kicked out (except for one) and replaced with two Dizzy Dandies.

Due to the change in shape of the castle entrance, this area with two Winged Clouds (one containing a Flower) past the door was removed.

The floor of the first corridor was flattened out in the final. A Flower was also removed, and the amount of Cheep Cheeps was reduced.

The room accessed by the first door uses a log boat object that is only used in pseudo-3D lava rooms in the final game. It doesn't quite align properly with the water layer here. In the final, the log boat was removed, and platforms were added, along with a door to a room with a Flower. The amount of Cheep Cheeps and monkeys was reduced, with the seed-spitting monkeys being removed from this room entirely. A green Egg Block was added by the door as well.

Back to the main corridor, the first spinning mace was moved from the ceiling to the floor in the final, with a Red Coin added in its place. A green Egg Block placed dangerously inside the sand was also removed.

Likewise, the second spinning mace was moved from the floor to the ceiling. The sand was removed entirely, and the Winged Cloud was replaced with a Flower.

The third spinning mace is a copy of the first one in this version, complete with the Egg Block. In the final, it's attached to the floor, and in its place is an alcove with two Red Coins.

Platforms were added above both of the Spray Fish in the final game.

The second door leads to the room with the bucket that you knock into the water to use as a boat. Like with the other room, a green Egg Block was added by the door, and several monkeys were removed. The bucket was also made much faster; in the prototype, it moves obnoxiously slow given the distance you're expected to take it.

There are sand barricades under the rocket-throwing Shy Guys, which were removed in the final.

The spot with the Flower between the two sets of rocket-throwing Shy Guys was made larger and more elaborate in the final as well.

The Clawdaddy corridors were made shorter in the final game. In particular, the arrow guides instructing you to jump over the incoming Clawdaddies are so far from the actual enemy that they're potentially misleading in the prototype.

The Clawdaddy in the middle corridor was removed and replaced with seven coins.

In the Lemon Drop room, a winged Cloud creates a red bridge to the left over the entire spike pit. In the final, this was divided into three of the same setup. and the Winged Clouds moved further to the left. The blue spikes were replaced with indestructible yellow spikes as well, and a Flower was added.

The arrow lift over the thorns was replaced with a paddle wheel, and a Flower was added.

The final room is completely different. The corridor inclines downward here; it inclines up in the final game. The Georgette Jellies were replaced with Frog Pirates. There are also bases for spinning maces on the ceiling, but nothing is attached to them.

Instead of Prince Froggy, there's a fight with Bigger Boo, who was moved to 2-4 in the final game. No Fangs spawn, not that it matters here because they can't be turned into eggs in this prototype; instead, there's a green Egg Block. The boss fight is mostly complete aside from the lack of Kamek intro.

When Bigger Boo is damaged, he doesn't emote at all. He also cannot be hit again until he's looked at and turns intangible.

Upon defeat, he dissipates in a wavy fashion. In the final game, he pops. The game softlocks afterwards.

Its preview tile on the level select screen shows a Burt squishing another Burt, but this level is actually another test level that cannot be found in the final game.

It contains a glitched brown thing with no collsion and a wall with rails on it. Probably it is a test level for Yoshi when he transforms into a Train, but the related morph bubble cannot be found. 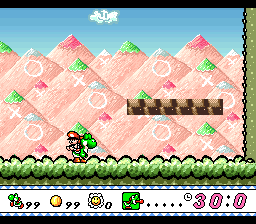 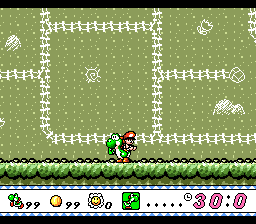 If Baby Mario transforms himself into Superstar Mario (e.g. by selecting an empty space in the item selector), the brown thing becomes a row of ? Blocks, each one releasing a Star when hit. 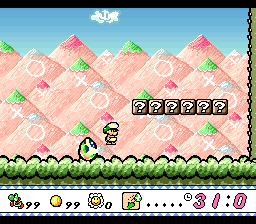 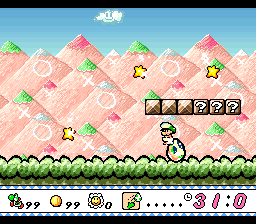 After Superstar Mario transforms back into Baby Mario, the blocks hit become tangible while all the others remain intangible and graphically glitched. 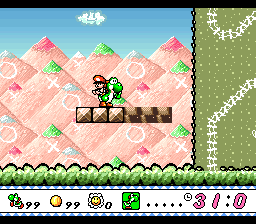 The wall can be explored using the debug free movement feature. 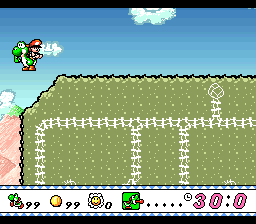 Became 3-6: The Cave of Harry Hedgehog in the final game.

The first room uses a cave background instead of jungle mountains. The two doors were replaced with cave entrances in the final game. There's also no way to reach the upper entrance without free movement.

The upper entrance leads to an alcove that contains a key in the final. A Harry Hedgehog in here was removed.

The amount of Little Mousers at the lower entrance was increased from one to four. A Fire Melon was also added.

This Harry Hedgehog on the sloped ledges leading up from the lower entrance was removed in the final game.

This small mushroom platform under the green Egg Block was also removed in the final. The Egg Block was placed closer to the ground as well.

Another small mushroom platform up ahead was replaced with a grey Chomp Rock.

The area in the far upper-left corner of the room has three Harry Hedgehogs instead of two. Once again, a Fire Melon was added here too.

The overall structure of the Mole Tank section is different. The two Winged Clouds containing Mole Tank transformation bubbles were replaced with a single (respawning) bubble.

This Winged Cloud that creates a very small staircase was changed to grow a beanstalk instead.

A green Egg Block above the Mole Tank section was replaced with a yellow Egg Block.

Another green Egg Block near the Middle Ring was removed entirely.

A Harry Hedgehog on the tall mushroom platform right before the long coin drop was removed.

The door at the bottom of the coin drop was turned into a locked door in the final. The amount of Little Mousers on the ground underneath was reduced as well, and a Fire Melon was added under the door.

The door on the ground in the lower right was replaced with a pipe that spawns Lantern Ghosts.

Both doors lead to different parts of the third main room. In the final, the lower door (made into a pipe) leads to a bonus room with a Flower.

The start of the third main room resembles the end of the final version of 3-6, but is much longer. Several trees with monkeys throwing fruit were removed in the final.

Where the Goal Ring is in the final is a ledge with an arrow sign pointing left, and two Watermelons. The arrow instructs the player to go back and platform on the trees to reach an upper route.

The upper route consists of block platforms with Harry Hedgehogs standing on them. The intent is to shoot them off the platforms with watermelon seeds to progress. The Goal Ring is located not long after. This entire route was removed as this room became smaller in the final game.

A slightly less broken variant of this prototype's World 2-8, down to ending with the same fight with Naval Piranha.