A Mini Battle can be restarted by pressing Select and can be exited before finishing by pressing L or R.

The big white spheres that can be collected in some Mini Battles are placeholders for coins. This graphic is still present, unused, in the final version.

The Mini Battles that can also be played in the final game.

Present in 4-, 5-, and 6-button variants. The final game doesn't have the 5-button version, though it was added back in Yoshi's Island: Super Mario Advance 3.

Border and ground graphics are different.

When Yoshi loses, no stars appear above his head and the Bandit disappears.

The background is different.

Lasts much longer, with a timer of 100 seconds. This was dropped to a more sane 30 seconds in the final.

The other major gameplay difference is that eating coins doesn't increment Yoshi's score at this point in development. 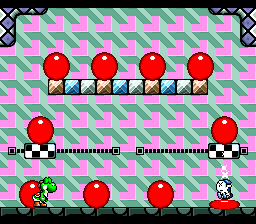 Comes in two variants here: one with static platforms, the other with moving platforms. Only the latter is present in the final.

Bi-colored kegs were replaced in the final version with vases of the same color, the brick wall became wooden and holes in it have an irregular shape instead of the rectangular windows.

Three full Mini Battles that are nowhere to be found in the final, though a number of sprites from them were left in the ROM. 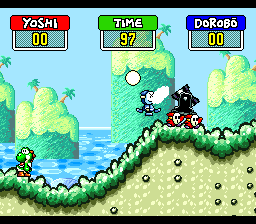 A variant of Gather Coins where the cannon is being moved in a field by Shy Guys. It otherwise plays the same as Gather Coins does in this build.

For some reason, the player can't move Yoshi horizontally, though this problem can be fixed by doing the following: when Yoshi is being shot in the sky from the hut keep L and R pressed, then when the Mini Battle begins also press Up and A. By doing this the free movement debug feature will be enabled, bypassing the L and R button debug override that makes the Mini Battle finish.

Yoshi wins even if he collects a number of coins equal to the Bandit's one, unlike the third cut Mini Battle.

The playfield consists of a ground segment that loops indefinitely. 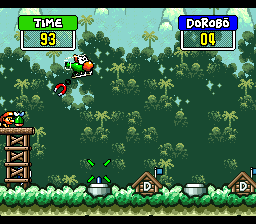 The objective of this Mini Battle is to pick missiles and destroy all four wooden houses within 100 seconds.

The Bandit doesn't have a main role in it as its score is only the count of houses left to destroy, but he can be seen walking below Yoshi and, if Yoshi approaches or touches the ground, he starts jumping. 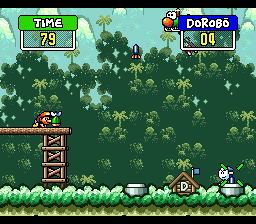 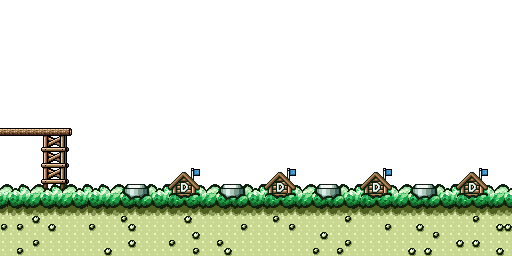 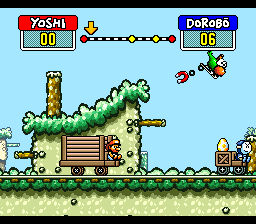 The objective of this Mini Battle is to fill the wooden cart on which Baby Mario is sitting with eggs picked from the Bandit's one before the wooden carts reach the end.

To win the Mini Battle, Yoshi needs to score more points than the Bandit by filling Baby Mario's cart with at least seven eggs. Result is shown at the end of the Mini Battle and, if Yoshi's score is identical to the Bandit's, it's a draw (on-screen misspelled as "drow").

Like the first cut Mini Battle, the playfield loops indefinitely. 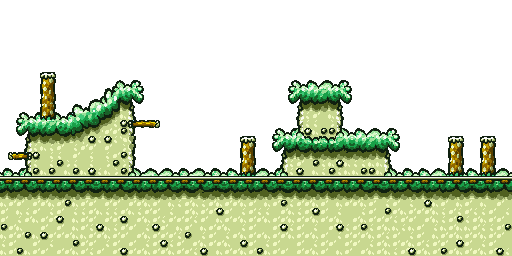