This page details prerelease information and/or media for Paper Mario.

After Intelligent Systems was chosen to make a sequel to Super Mario RPG, the team had issues figuring out how to make the game thematically different from the main series Mario games. The team tried to use polygons, but the idea was rejected. The team broke into three groups that worked in parallel to create sample models. Naohiko Aoyama, a new employee at the time, ended up creating a rough image during his downtime that involved 3D models but looked like a picture book transplanted into a video game with paper-thin 2D backgrounds and characters. Aoyama conceived of this art style by going against the trend of realistic 3D graphics; instead, he thought it would be interesting to use the 3D capabilities of the N64 to further emphasize a 2D game.

At the convention, Paper Mario was said to be released in 1998 for the Nintendo 64DD under the title, "Mario RPG 2." A build was shown off featuring an art style very different from the final game's, such as Mario having more pronounced eyes before being changed to plain black dots. It was covered in the January 1998 issue of Consoles, a French gaming magazine. 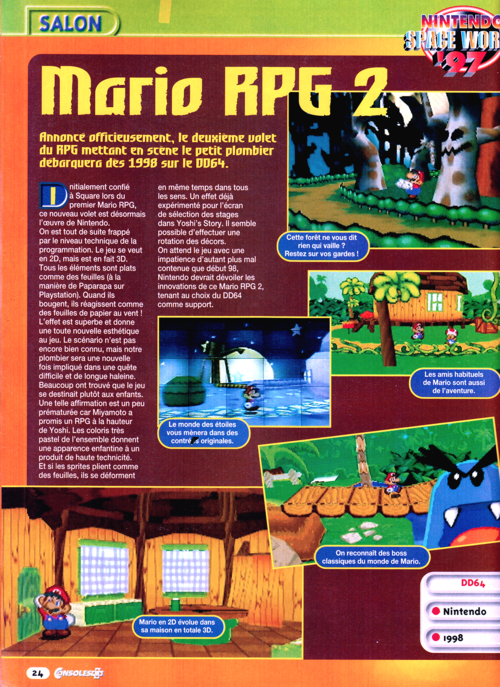 This build more closely resembles the final game. The art style is further along, with Mario looking almost identical to his appearance in the final game. Partners are present for the first time, with Goombario and a generic Koopa Troopa being the only two shown.

Overworld The HUD in both screenshots is significantly different from the one in the final:

Mario in Goomba Village with the Koopa Troopa partner. Nearby is Goombaria, as well as the Goomba family's house.

Mario and the Koopa Troopa partner in an early Mt. Rugged next to another Koopa Troopa. In the final game, no generic Koopas appear in Mt. Rugged.

Battles Battles at this point use a similar system to Super Mario RPG. Unlike the final game, partners are AI controlled and fight on their own, requiring no player input for their actions.

There are notable aspects to these battles:

Mario in battle against two Koopa Troopas. He's using Hammer, the icon for which is filled into the yellow square on the upper-left.

Mario and Goombario in battle against Red Goomba.

Mario and Goombario in battle against the Goomba King.

This build looks nearly complete, with the art style mostly finalized and some of the game's locales completed. This build shows signs of a completed battle system design, with FP and Star Points present.

Mario and Goombario in Koopa Village.

Mario and Goombario fighting a Goomba and Spiked Goomba. The selection cursor looks the same, and based on Mario's stance, he appears to be using Jump.

Mario using Hammer on the Goomba King, who is accompanied by the Red and Blue Goombas. Hammer's Action Command is faintly visible on the left side of the image.

A build shown at Space World 1999 is very close to the final, with many aspects fully completed. The show's official press release states that the game was halfway complete at this point, with an expected release date of January 2000. Rough drawings of Kooper, Parakarry, and Lakilester were included, along with several screenshots. Interestingly, several of the in-game screenshots from various media show different builds with minor variations.

The title screen shown in this build, featuring a different version of the final game's world map with animated clouds. The game is still called Super Mario RPG 2 this late into development, with the copyright date given as 1999.

Mario and Goombario in Toad Town.

A battle involving Mario and Kooper versus a Koopa Troopa and a Goomba. This looks much closer to the final.

An early pause menu shown. Part of the text for this can still be found in the Japanese version.

Peach's Castle. The only time a similar view of the castle can be seen in the final is during the epilogue, in which Mushroom Kingdom residents can be found and the camera is zoomed in more.

Mario using the hammer in Flower Fields. Mario has the Super Hammer here, which isn't possible in the final game. The HUD has text that says "LIMIT" under the HP counter.

Peach and Twink in the castle library.

The footage in the video contains a significant number of differences from the final.

The build shown off at E3 2000 is very close to the final game. Most differences are merely small changes to the text (footage starts at 2:02:39):

Oddly, the English line is closer in meaning and tone to the early one, so a more literal translation of the final line has also been provided.

The footage from 2:07:32 onward appears to be B-roll from much earlier in development:

The developers considered voice acting, but found that playing back voice samples on the Nintendo 64 was difficult. Eventually, they settled on using various font effects to bring out the characters' personalities.

There was a rejected badge would increase Mario's Attack, but would prevent the player from giving him commands. The badge also gave Mario a green hue. (Chief director Ryota Kawade joked that the programmer was a Luigi fan.) There is an unused badge called イカリノパワー (Power of Rage) that fits this description, but it gives Mario a red hue rather than a green one.

This build appears to be later than the one shown at Space World 1999.

Several later screenshots showcase text that was rewritten or otherwise has no final equivalent: 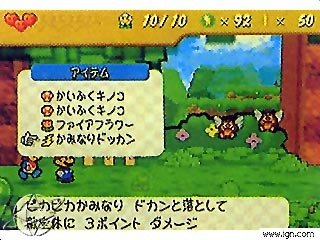 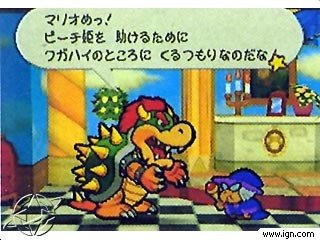 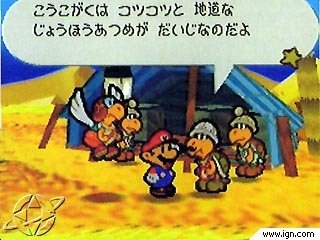 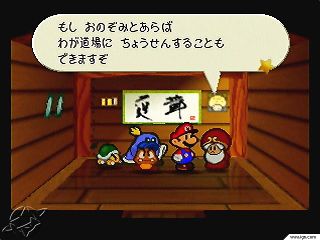 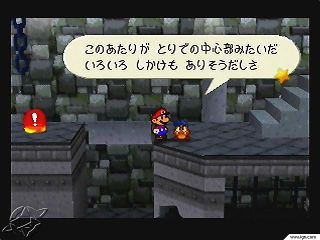 The early line calls the room the "central area" (中心部) of the fortress. The final line takes out the 部, rendering it closer to "center". The English line unwittingly hews closer to the early script, which shows how minor a change this is. 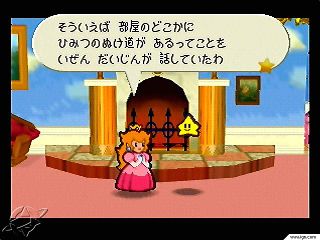 The sentence was slightly reworded, in a way that doesn't affect its general meaning. 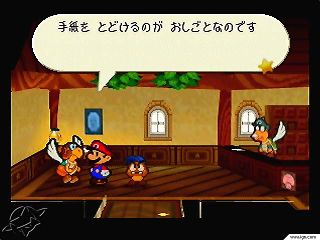 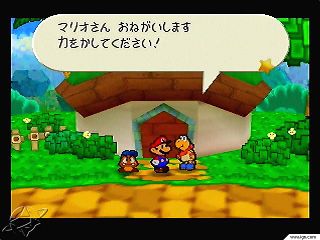 Aside from the text being entirely rewritten, Kooper doesn't appear to have his signature verbal tic of ending sentences with ス here. 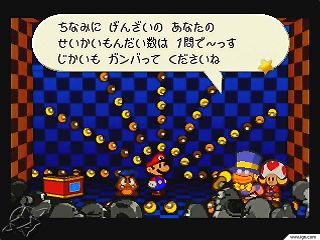 Another minor tweak: がんばって (good luck) went from being rendered in katakana to hiragana. The meaning doesn't change at all.

Retrieved from "https://tcrf.net/index.php?title=Prerelease:Paper_Mario&oldid=1100085"
Categories:
Cleanup > To do
Games > Games by content > Prereleases