This is a sub-page of Paper Mario.

The Japanese version of Paper Mario has reams of unused text, most of which was either left untranslated or removed from all international releases.

Lines relating to the unused Suspicious Note item, which would have given a hint toward Anti Guy's weakness. In the international versions, the Suspicious Note instead triggers the same dialogue as its used counterpart. The last message in the set is identical to the used version.

Placeholder messages meant for the Shy Guy rampages in Toad Town. There are three copies of each. 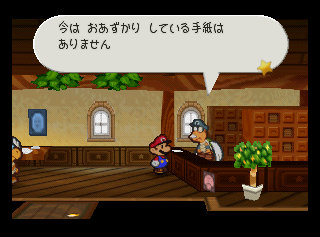 "Right now, we have no letters."

In the Japanese version, the Postmaster says this if you talk to him before receiving any letters (which under normal circumstances is impossible, as the Goomba Bros.' letter to Goombario is available as soon as you enter Toad Town). Trying to do so in the international versions just results in him saying nothing.

This is very similar to a line already spoken by Minh T.'s admirer. The only difference is the use of あそんでる (playing) versus あばれてる (running riot).

Some unused duplicates of used messages.

A message that could go just about anywhere in the game.

It seems Kent C. Koopa would have said something different after battle, had Mario taken advantage of his weakness to sleep.

Various lines belonging to characters from the first two chapters, including the Koopa Bros. and Bombette. Notably, one of them refers to a map of Dry Dry Desert, which may have corresponded to one of the unused map items.

Lines for the Boos in Boo's Mansion. Two of them look like they were intended to be dialogue for the Boo guarding the Weight, had you been able to talk to him after collecting it (he disappears once the treasure chest is opened). 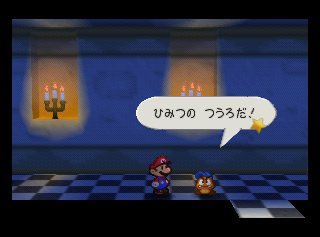 "It's a secret passageway!"

Tattles for locations where Goombario is normally either unavailable or can't use Tattle.

This Tattle for a Raven is located amongst those for the prisoners in Bowser's Castle, which is very strange (and implies there was a Raven present at the castle party in the beginning of the game). There are no Ravens outside Lavalava Island in the final game. 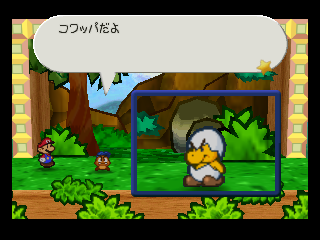 Tattles for enemies you normally can't Tattle (or even encounter). The Shy Guy crowd is not the same one as the Shy Squad, which has a different name (ぐんだんヘイホー).

Wedged between two blocks of Tattle data is a lone star, in a section all its own. Kinda like Texas.

In the Japanese version, characters in the south area of Toad Town will each give a unique message if they're spoken to earlier than intended. All of them are extremely minor variations on the same sentence, with the exception of a few that are meant to sound in-character, like Fice T.'s. It is possible to see them by abusing out-of-bounds glitches to bypass the collapsed logs blocking the area prior to completing Chapter 1.

Speaking to these NPCs in the international versions simply gives you their post-Chapter 1 dialogue... unless you try to talk to the Bub-ulb a second time after receiving the Magical Seed, in which case the game softlocks.

What appear to be old Star Spirit menu placeholders.

Earlier battle menu options that were removed instead of being localized. The only notable entry here is the Party listing, a leftover from when partners were accessed from their own submenu instead of being under Strategies. The latter three lack the formatting commands of the used battle options.

Status messages. It's not clear whether the second one is referring to the player or the enemy; it may have been intended to apply to either.

Cut Action Commands. The first one was probably removed because of Mario Party, the second for being too difficult. The third belongs to the unused Quake Jump badge, which was probably left unused because it's too powerful.

Unused battle warnings, which seem to be covered pretty well by other messages. 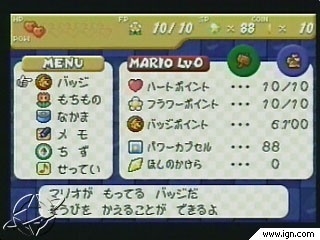 Text from an earlier version of the pause menu. Possibly two earlier versions, given the presence of entries that are variations of the same term (もちもの vs アイテム for Items, for example). The three Levels at the end are probably referring to partner ranks.

It looks like at some point there was supposed to be an Ultra Block to upgrade party members to Ultra Rank, instead of using a second Super Block. Sprites for it still exist in the data.

Page labels that go unused. There may have been a miscommunication between the translation teams.

Item get messages. Some of them have used duplicates elsewhere in the ROM.

Battle menu options for the unused badge moves, as well as some debug filler. Oddly, One-Shot Smash (ヒッサツナグーリ) is referred to as One-Shot Hammer (ひっさつハンマー) here. 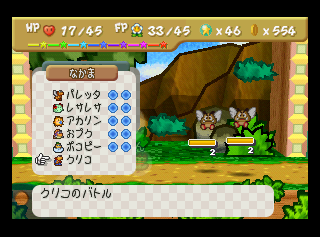 Untranslated menu description placeholders, most of which are devoted to party members. These reveal that a number of other species were under consideration for partners at some point, including a Ninji, a Chain Chomp, and a Bandit. There are also entries for Goompa, Goombaria, and Twink, as well as a mysterious character only named "Red". Additionally, partners originally ranked up three times instead of two.

Party member attack names. It looks like there are only enough for two more party members, and the rest of the text was supposed to go to something else. The first attack name is repeated three times for all of the party members in the Japanese version (the repeats were removed internationally), and the first unused set of attacks shares this trait. The last one (Get Sent Off Somewhere) may be related to the unused "Please Come Back" item.

What looks like a bunch of display tests for different functions of the text system.

These have no ID associated with them; most exist only as leftover text, while a few have corresponding graphics in the ROM. For items that did have some functionality programmed in but weren't used anyway, see the Unused Items sub-page.

In the Japanese version, the battle-related pickups have names when hacked into the items menu. The only actually unused item in this list is the Heart Container. 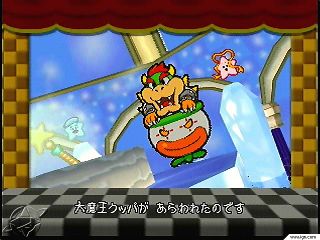 After the game's intro text is four copies of an older version of it, part of which can be seen in the screenshot at right. The biggest difference is that the part where Bowser invades is treated as part of the story, rather than him butting in and messing things up. The first copy is missing a space in the third line, but otherwise they're identical. They include the same formatting commands as the regular intro text.

Apparently there was going to be a title card marking the flash forward to Mario and Luigi's house during the ending.

These three stars make up the entire block of text before the Toad Town News bulletins.

At some point, there was supposed to be a sign for the garden in Toad Town.

This message is positioned right after the signs for the Windy Mill, but the mention of a Shy Guy probably puts its intended location somewhere in the Toy Box.

End-of-chapter narration for the Prologue, which doesn't have an end screen.