New Super Mario Bros. went through many style adjustments during development, and much of the pre-release material depicted graphics resembling that of Super Mario World 2: Yoshi's Island and Super Mario 64 DS. 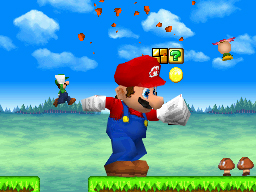 The ? blocks, brick blocks, used blocks were redrawn for the final.

This video shows only one new area, an underground level that doesn't resemble anything from the final game. According to the level name on the bottom (top) screen, this was another area of the field level.

The article mentions the use of a drill move, whether or not this was a cut move, a tentative title for the Ground Pound or simply the Drill Stomp (achieved by using Spin Blocks or entering Tornados in the final game is not known, although the latter is more likely.

Article 1
This one mostly re-uses older screenshots, with a few exceptions. 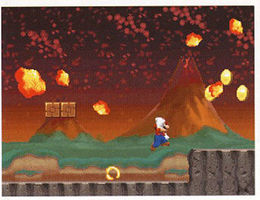 This screenshot shows an early design for the volcano levels. Later versions of the background, foreground and the tileset still exist in the final, but go unused.

This looks like part of 6-1 in the final. The volcano background could suggest that:

This screenshot shows an early version of the Mini Mario bonus room that appears in World 8-2 in the final, the background is yellow instead of green, the mini blocks are purple instead of brown, the big blocks are pink instead of light brown and the platforms have a different texture. It is the second bonus room that has moving platforms (the first being in World 6). And the second one with the 8-bit Mario sprite background that is part of a mostly unused group of backgrounds (the first being in World 2). This may be one of the earlier bonus rooms. 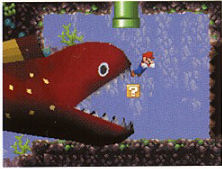 The apparent end of an underwater Mega Unagi level (or at least a section) doesn't resemble the end of either of the levels featuring the enemy in the final game (4-3 and 8-3). Although it most resembles 8-3 due to it having a a Mega Unagi that chases you.

If the Unagi did not stop moving forward at the end of the level (like in the final); it looks like Mario was about to get eaten, unless the player got in the pipe very quickly.

On a possibly unrelated note: both Mega Unagi levels have an invalid (or at least unknown) value set for Sprite Set 5, this isn't the case in most levels. 8-3 also has invalid (nonexistent) terrain tiles, another feature that distinguishes it.

Another early version of 3-1 that appears to have been taken after E3 2005, or is a mockup, due to the different background. Of note is that the Cheep Cheep is moving upwards, something only Deep Cheeps (which only appear in 6-5) can do in the final.

Article 2
This one uses a lot more screenshots that were released March 13th, 2006. 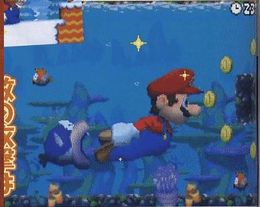 A later version of 3-1, with the final's background. The only difference is the water visible at the top. Other screenshots include other sections of this level, and a few from 3-3. 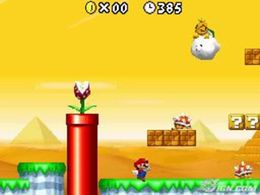 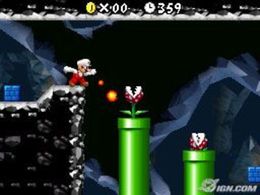 A mostly finished 1-2 that shows an earlier version of the underground tileset. The tileset was probably changed to fit better with the blue blocks. There's also a brick block behind Mario that isn't in the final. 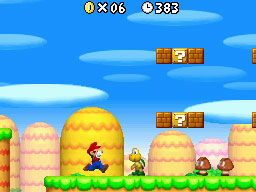 An earlier version of 2-4 that's set in a grassland. Other screenshots include one of Mario kicking the Koopa shell, and another one in the area with the Hammer Bro. 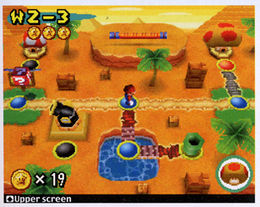 This screen shows that 2-4 was once an oasis like 2-2, or at least they marked it like that on the map.

This correlates with the existence of a screenshot showing the same block arrangements that appear in this level, in a grassland level.

The level does not have any desert-specific elements, other than the swelling ground - which supports the theory that this level may have existed in another world. 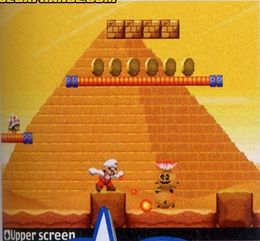 This screen shows Unused Level 5 in a later form. This shows that the level was removed after the desert tileset was changed to the final. Also notable is the Spiny, which uses the wrong sprite-set in the final. 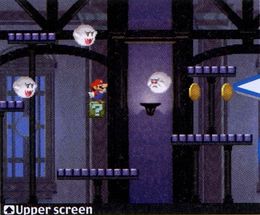 A nearly finished World 4 Ghost House. The candle flame in the background is missing, and the "?" Block is a darker yellow instead of gray. 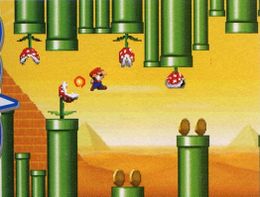 An early version of 3-B, with only green pipes, and with the desert background. This could mean that World 2 was going to have another extra level.

Another screenshot of an early 6-1. This one has the final mountain background, but still uses the black volcano tileset. 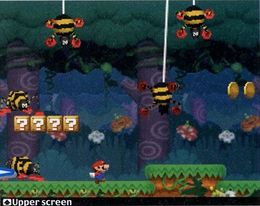 An earlier version of 8-4, clearly proving the level was going to be in World 4, which makes sense as it's the world with the only other level with Scuttlebugs. 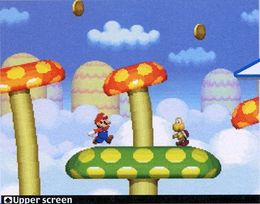 A sky level that resembles 1-3. This shows the larger mushrooms in the sky tileset were going to be used more commonly. 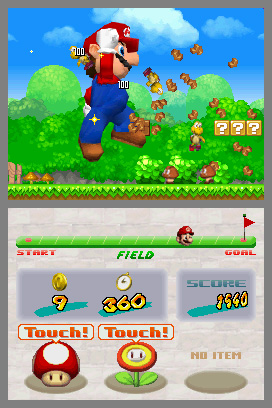 The site once hosted four trailers for a nearly finished version of the game.

The site hosts a few trailers for the game.