Diddy Kong Racing is like Mario Kart but with more interesting tracks, as well as planes and hoverboats in addition to karts. 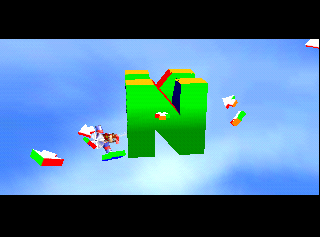 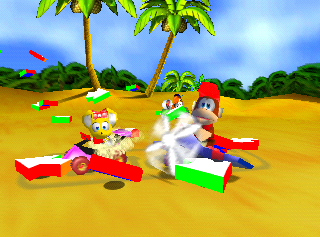 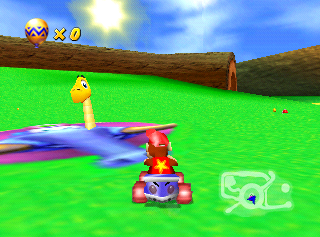 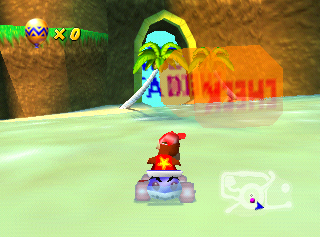 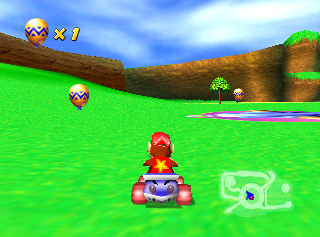 Applying the below GameShark code will display various debug objects in the current map, normally unseen.

Use one of the below GameShark codes to display the normally invisible collision. 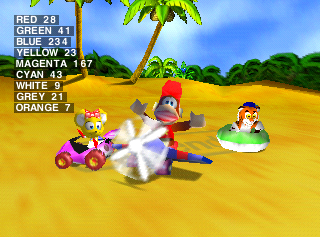 A simple debug display showing the current colors being rendered in the area can be displayed with the below code.

Present in the game is a crash debugger that can be enabled by entering the cheat EPC in the Magic Codes screen. You'll also need a memory card plugged into the first controller. When the game crashes, reset the console and the crash debugger will appear. It'll quickly flip through four different pages automatically. Resetting the console again will boot up the game normally. 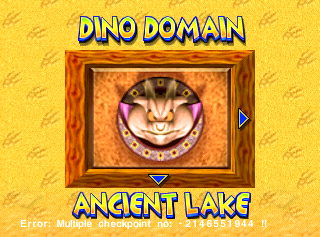 If for whatever reason a track has more than one checkpoint, an error message will display at the bottom of the screen very quickly. 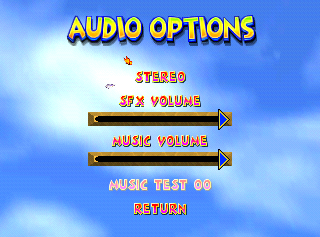 A sound test is accessible by the cheat code "JUKEBOX".

Sound test track 12 ("sea_2b" internally) is an early theme for Crescent Island but was cut in favor of a different song.

The character-select music changes its lead instrument depending on the character highlighted by the player. Within the track, there is a MIDI channel for a sitar lead which cannot be triggered under normal circumstances. This may point to Taj the genie being playable at some point in development as the track shares its sitar with his other in-game themes. Taj would eventually be made playable in the game's DS remake.

There are some unused/debug cheat codes in the game. Some are still enterable, others have been changed to a string of numbers, rendering them unenterable due to the convenient lack of numbers on the cheat code entry keyboard. To unlock all cheats, including the unused ones, use one of the below GameShark codes.

It's also mistakenly listed in the official strategy guide, which helpfully doesn't give you the actual codes. 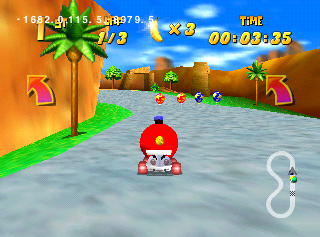 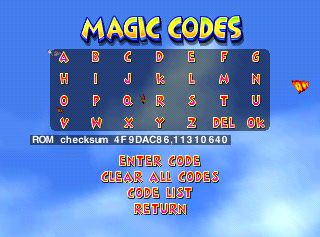 A logo for Pro AM 64, likely from an early version of Diddy Kong Racing before Diddy was in the game.

A second Pro AM 64 logo. There is no palette associated with the texture.

A small, earlier version of the Diddy Kong Racing logo. The palette here is guessed, as one couldn't be found in the ROM.
A German video of a pre-release version (labeled "1.964 VERSION") shows that it was once used on at least one of the arches seen throughout Greenwood Village.

A series of icons used for an early version of the character selection menu. Note that icons for Diddy and T.T. do not exist, while Banjo, Conker, and Timber's icons only have placeholder text. These likely came from a period when the game was called Pro AM 64.

Crudely-drawn placeholders for the signs in the lobby of Sherbet Island.

A sign for Twilight City which matches those found in the Future Fun Land lobby. The sound effect for when T.T. says "Star City" is internally named dean_twilight_snd, so this is likely an early name for that track.

2D image digits 07, 09, and 0B are unused HUD maps. 0x07 vaguely resembles Jungle Falls and Greenwood Village - its layout is also quite similar to Thunder Cove, a track exclusive to the DS version of the game, though this might be a coincidence. It's also unknown what track 0x09 could be for, but it could potentially have been for this scrapped track. 0x0B matches the layout of the unfinished jungle temple track.

A torch with googly eyes.

A bunch of development-related signs and symbols.

These icons show up on tracks when viewed in a setup editor as markers determining certain functions of the game, such as checking your progress on a track, silencing/enabling a MIDI channel, or warping the player to another area.

A golden Rare coin. These coins were replaced with bananas to fit this game's atmosphere better, though these would have functioned the same.

Individual letters of "RARE". Likely used instead of the silver N64 coins in the Coin challenges.

A door with a silhouette of a balloon that has a question mark on it.

A door with a balloon that has a check mark over it. Most likely was used when you completed both races and coin challenges.

A graphic that was likely meant to be used in Spacedust Alley.

A fan blade intended for the air vents in Spaceport Alpha.

Textures for an unused skybox.

A small pair of eyes.

An earlier version of the Taj pad found in the hub world. 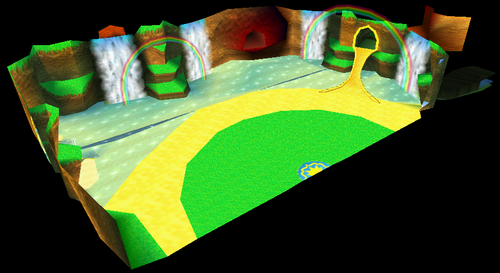 This texture is actually present in the map used in the cutscene that plays when you unlock the first Wizpig race but is never shown on-screen. The map itself is also based on an earlier version of the hub world. 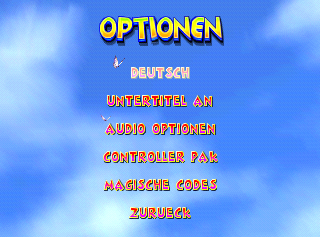 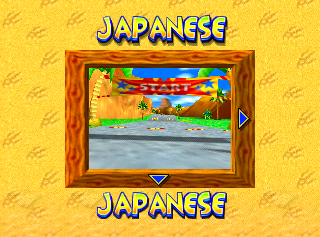 Aside from the English and French options in the menu in the USA version, there are German and Japanese options, though the latter is not quite finished as it replaces much of the text in the game with placeholders.

A couple of build dates are intact in the ROM. 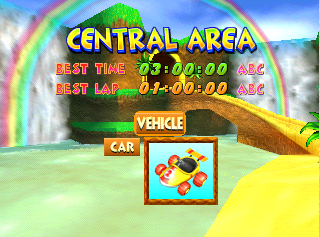 Levels in the game that don't contain any time trial records, like the hub world, will use a default record of 3 minutes with the best lap being 1 minute and with the name ABC. 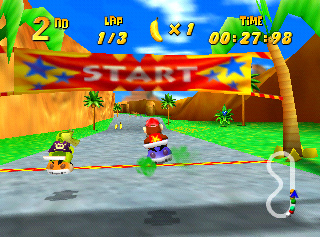 Present in the game are two unused vehicles which can be selected using one of the below GameShark codes.

Vehicle ID 03 appears as a car without any wheels that can fly like a plane, but unlike the plane, this vehicle doesn't lose altitude when slowing down.

Vehicle ID 04 appears to be a duplicate of the car except you can't control it. In most tracks, it'll just crash the game.

A couple of early versions of the Adventure mode intro. The first appears to be a very early placeholder which just displays an unused textbox. The second is a slightly earlier version of the intro which has different camera angles and starts the player in a plane instead of a car. It also takes place in the final version of the hub area instead of the earlier version.

Three maps in the game contain a camera flyby that can't be seen normally since they're not selectable in the Tracks menu. To see these in-game, use the warp modifier codes on the notes page.

Out Of Bounds Objects 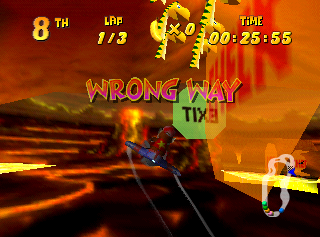 For whatever reason, a normally inaccessible warp exists underneath the starting line in Hot Top Volcano (the green octagon in the screenshot). Where it warps you depends on the version you're playing. 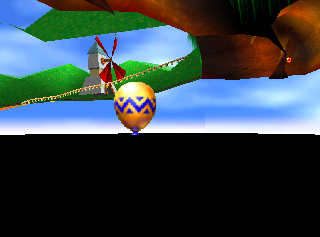 Underneath the Dragon Forest boss track is an unreachable golden balloon. 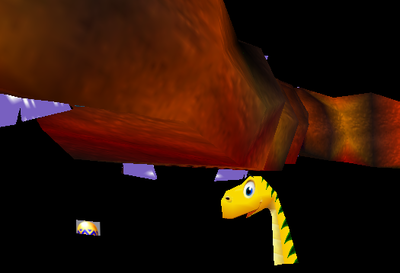 There's also an unused spawn point near the balloon (represented by the yellow dinosaur head). 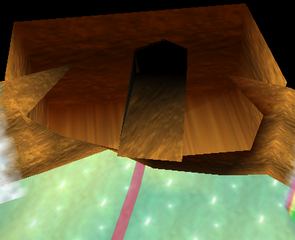 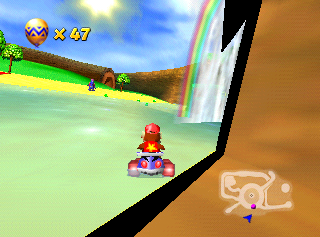 Behind the large Wizpig head in the main hub area is some out of bounds level geometry which is normally never shown in-game. By reversing towards the wall, it's possible to see a small portion. It lacks any collision, so you'll just go right through it. 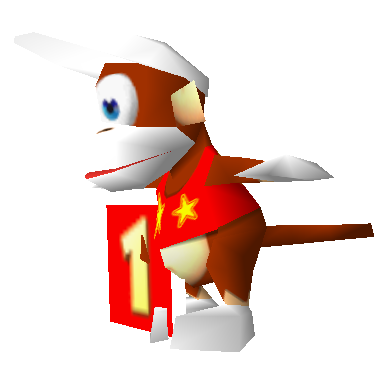 In the player select screen, Diddy Kong has a tail, but it can not be seen due to the camera angle.

The pterodactyl model is internally labelled "Terryboss" and is grouped together with the other bosses in memory. This suggests that it was originally intended to be a boss! This may explain the game's unused pterodactyl sound effects, as well as the unused snowy version of the Dino Domain boss track. The model has six animations (idle, accelerating, running, taking flight, flying, taking damage) - exactly the same order and type of animation used for Smokey the Dragon (minus a talking animation).

The object corresponding to Taj is known as Parkwarden internally.

TT seems to have originally been called Boost, based on the internal name of his adventure mode model.

Several music tracks have internal names that suggest they were once meant for a different purpose:

All areas from the title screen sequence are on the same map, albeit extremely spread out.

Boulder Canyon has a height limit for planes even though only hovercrafts can be selected in that track. It's possible that planes were going to be selectable as well in that track. 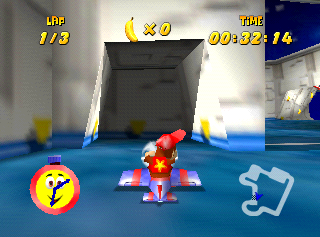 Next to the starting line in Spaceport Alpha is an empty alcove that serves no real purpose. It's possible that Future Fun Land was going to have a battle mini game as well like the first four areas and that the key to unlock the door would've been placed here. The DS remake has a Power-Up Token placed inside this alcove.

The drawbridge in Boulder Canyon is internally named "hittester" suggesting that it was used as a test object.