Downwell is a game about falling with style. And gunboots.

The game has a fair amount of unused sprites, some even with more than 2 colors. A lot of them also seem to have 'test' or simply 'sprite' in the name, instead of 'spr'.

sprite358 is an earlier version of the bat enemy, with missing red shadows and one different frame of animation.

sprite4, sprite5 and sprite7 are smileys of some sorts, with sprite5 depicting some sort of clock. sprite4 can be seen in rmInit when exploring the room data.

sprite47 is a tile with an arrow on it, probably used for testing.

sprite8 is a blue bar, probably used for testing collison.

sprite118 is a textbox with the text item crudely drawn in it. Probably used as a placeholder.

testgembar is an early version of the Gem Bar that would increase until you got Gem High.

sprTestLight is a blur of light. Something similar to this light can be seen in this early screenshot on the website.

sprBucketTest has a well bucket hanging on a rope. Because of its size, it probably would've been placed somewhere on the title screen.

While not unused as a sprite, sprBgCloud has a guy in the background. However, he is never seen in-game, because the gameplay is covering him up. 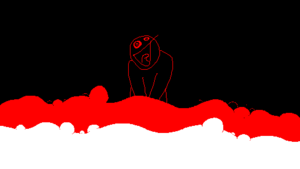 This is a soundfile that would've played when you were in a timevoid that contained gems or a gun. The sound can be heard in prerelease footage of the game, but these timevoids are just silent in the final game.

To activate Downwell's debug mode, do the following (as of the version of the game datestamped 2017/10/02):

In more recent builds of the game, enabling debug mode will display the word "debug" on-screen along with a framerate counter. This isn't present in the (slightly older) screenshots that follow. 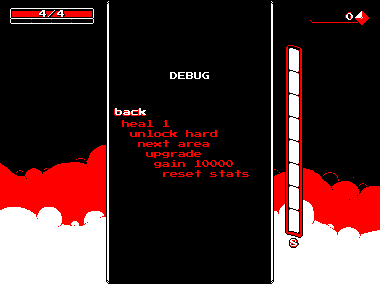 Once the debug mode is enabled, pause the game and press both direction buttons at once to open the debug menu.

The options on this menu are mostly self-explanatory. Selecting "upgrade" also clears the current stage.

In addition to the debug menu, various keys are also available when the debug mode is enabled: 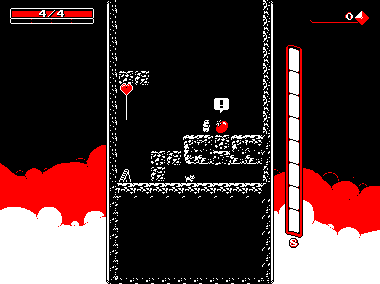 Pressing 7 with debug mode enabled warps you to the test room. The appearance depends on which area you warped from, but the contents are always the same. There is a heart balloon, the cat from the ending, and a tomato NPC that says "tomato" when interacted with. Two Flying Skulls were also added in a later update.

Picking up the cat triggers the ending sequence, like normal.

A feature that was shown in preview builds of the game (as well as an old blog post by the developer) was the ability to steal items from shops by jumping behind the counter and destroying their cases, which would cause the shopkeeper (and all future shopkeepers) to become hostile and start attacking the player, in true roguelike fashion.

While this feature no longer officially exists in the final version of the game, the item cases still do have a defined number of hit points (one million, to be precise), and all of the programming for the hostile shopkeepers and for breaking the item cases is still in the game. However, the item cases themselves are no longer considered "shootable", and their Game Maker object definition no longer has any shape data, effectively disabling the feature.

Changing the byte at 0x1ADDCC from 00 to 01 in data.win will cause all item cases in the game to be automatically destroyed, triggering the enemy shopkeeper behavior and allowing you to take the shop's entire inventory without spending any gems. 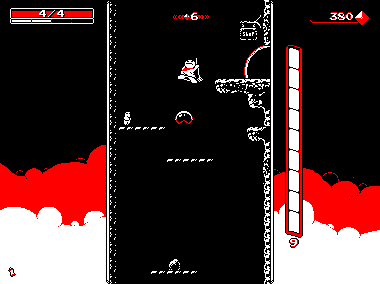 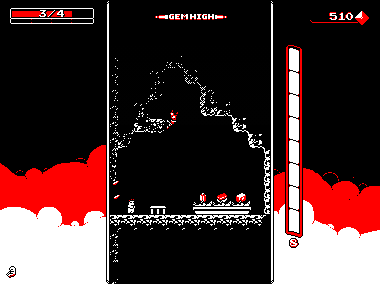 Enemy shopkeepers are invincible, extremely agile, and have a powerful attack that does up to 8 HP in damage with each hit. Once they turn hostile, they'll begin trying to pursue you as soon as you approach the entrance to a shop, even if you haven't entered the timevoid yet. You can lure them out of the shop in order to get easier access to the shop's items, but they'll continue moving around and posing a threat for the remainder of the stage.

Normally, the scenery you see on the surface is the same every time you play, with a bit of variation in the player character's starting point and idle animation. However, there are actually five different versions of the surface with completely different scenery in each one, and some programming meant to select one of them at random every time you start the game or return to the surface. Unfortunately, in the final version of the game, this code effectively short-circuits itself by always selecting based on a constant value instead of a random number.

By changing the byte at 0x13594C (for starting the game) and/or 0x12C8F4 (for returning to the surface) in data.win, you can choose one of the four additional versions of the surface:

By changing the byte at 0x135658 in data.win, one of several unused rooms can be accessed in place of the previous test room when pressing 7 with debug mode active: 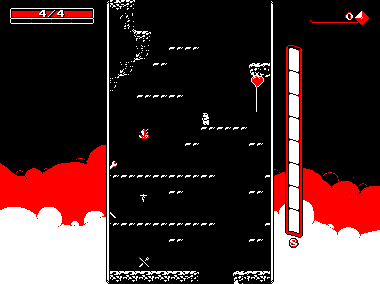 This room is about the same width as the surface, and features several 1-way platforms with collectible versions of all of the upgrades. There's a small exit at the bottom which returns you to the surface. 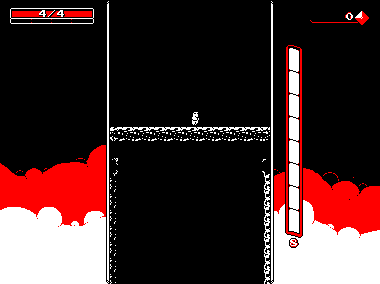 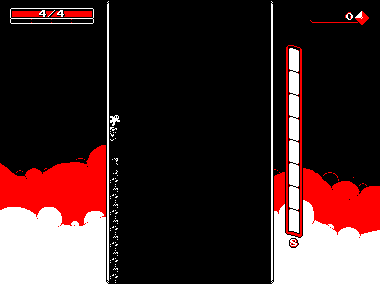 This room is 3 screens wide, but uses flick-screen scrolling (like when moving between normal stages and timevoids) rather than the smooth scrolling featured in the previous room and the surface. The left and right screens are almost entirely empty except for the very narrow edges of the central area, but if you slip through the 1-tile gap between the top platform and the side walls, you'll fall down into a normal stage. 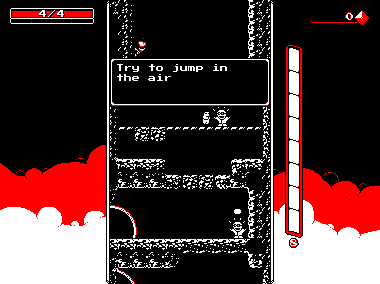 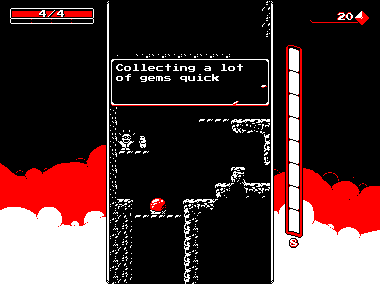 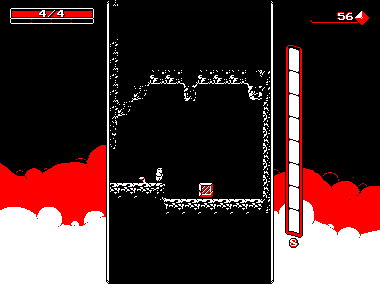 This room is a tutorial sequence presumably left over from preview builds of the game. There are a few things featured here which existed in said preview builds but not in the final game, such as non-shopkeeper NPCs, different looking gem clusters, and weapon boxes that you have to shoot or stomp to open.

Parts of the NPC dialog are displayed slightly incorrectly due to text formatting differences with the main game. There are also some adjacent text strings which are earlier versions of the text shown in the tutorial:

There are a couple of other adjacent text strings that seem to be intended for this room, but aren't actually shown: 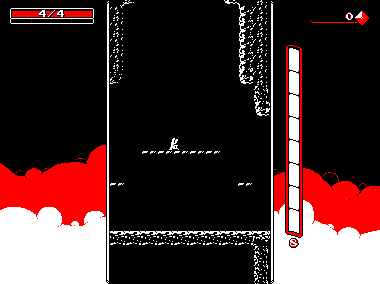 Another wide, smooth-scrolling room with nothing of interest in it. Based on the name, this may have been an early concept for a boss encounter. 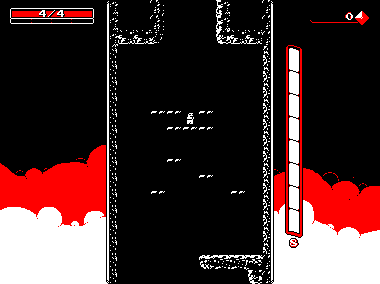 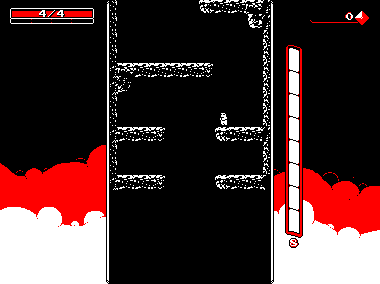 This room is about two screens tall and returns you to the surface once you hit the (invisible, but solid) bottom.

Despite the name, this room contains no enemies. 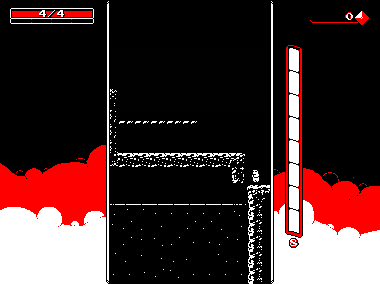 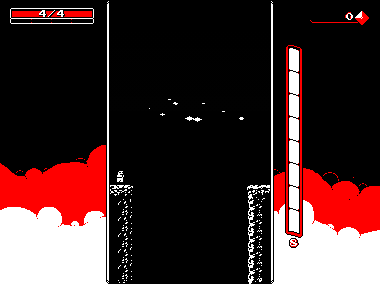 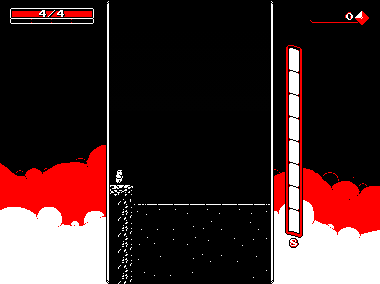 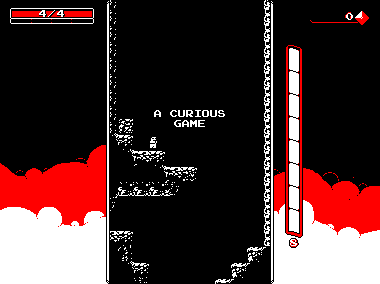 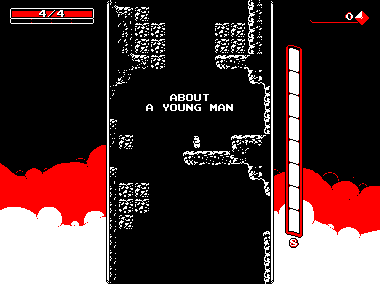 This room starts with a three-screen-wide area similar to the surface. Going into the "well" takes you into a level featuring bits of background text that is mostly the same as that featured on the game's official website, although the website was later changed to refer the player character as a "young person" rather than a "young man".

Going too far into the stage will exit the game with a script error.