Drakkhen is a really weird RPG in which you walk around an overworld in first-person view, explore dungeons in a side view, and monsters yell "Ecch!" a lot. Just don't fall into the water. 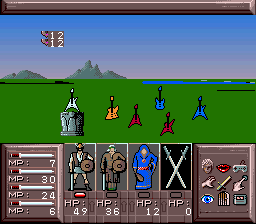 There is an unused debug flag at $7E9978 in the SNES RAM. Set it to $01 to activate the debug display. There are two numbers will be displayed at the top-left corner of the screen, representing some parameters of first two characters in the party.

Additionally, set $7E997A to $01 to display the ending easter guitar sprites depending on a current state of the game. Note, there are two more guitars than in the regular ending (see info below). They may be revealed by entering the first player's name as "DRAKKHEN".

There is a "guitar Easter egg" in the credits which is activated depending on how many player characters are dead when entering the ending. Up to 4 guitars may be displayed based on how many players are left alive at the end of the game. 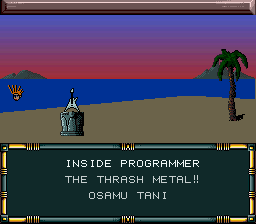 Additionally, there is an extra object of the Punk Head at the left side of the screen which may appear sometimes seemingly randomly. There is no strict condition to make this sprite appear. It appears if the random number generator of the game generates the number where the lower 5 bits are 0. The random number generator depends on H/V PPU counters, position of the player on the map, direction on the map, and frame counter.

Many spells from the PC version are still in the game in an unfinished state.

Values for xx (note that entries in italics can be learned in-game but can't normally be cast in battle):

A "trap door" monster from the PC version seems to have been worked on, but ultimately scrapped. He is in a very unfinished state. Use the Pro Action Replay (PAR) code 7E983807 to see him in action; you might have to enter the character menu first.

Normally Hazhulkha does not move when you meet her in the SNES version, but if you use the Pro Action Replay (PAR) code 7E983836, she will animate. Note that she did animate in the PC version.

Two frames of a running calico cat are stored with Drakkhen's overworld graphics. The graphics change for each of the game's four overworld regions, but the cat stays the same. This indicates it's probably just filler.

A happy face can be found stored at the end of the moon phase graphics. It is also most likely to be memory filler.

This bucket appears with the menu graphics in the ROM. In the PC version of Drakkhen, this bucket appeared on the inventory screen and when you wanted to drop items, you'd drag and drop them into it. In the SNES version, there is a command to drop items but it is text only. The bucket sprite is not used.

These are loaded into RAM when the game is loaded, then overwritten with the sword/staff graphics. They appear to be older versions of the battle/magic meters.

The crosses on the gravestones were removed to remove religious imagery in the international versions.

The Anak shrines had a cross along the top in the PC and Japanese SNES versions which were changed in the international versions to a vertical rectangle to remove religious imagery.