Dynamite Duke, Dux, and Headdy join forces to form the Dynamite League! Then, they either fight an ancient evil or play baseball. 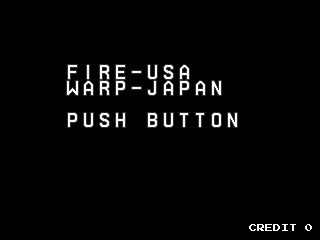 To enable a region switch at the start of the game, place the following cheat in MAME's dleague.xml cheat file:

Press 1P Button 1 for USA and 1P Button 2 for Japan. Note that the "Winners Don't Use Drugs" and export warning screens are not affected by this switch; they're dependent on the region flag at 0x5FFFE in the game ROM. 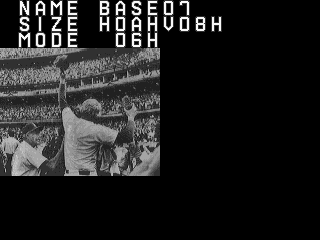 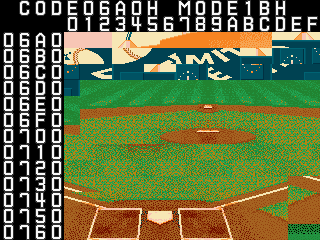 To access the second viewer, hold 2P Button 1 + 2P Button 2 and insert a coin. This displays the game's graphics exactly as they're stored in the GFX ROM.

In both viewers, press 1P Up / Down to scroll through the graphics and 1P Button 1 / 2 to change the palette. 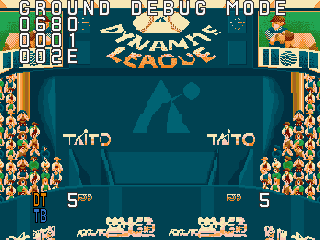 Hold 2P Start at the end of each half-inning (After the camera zooms out but before the music stops) to access this field viewer. Use 1P Joystick to move the camera and 1P Button 1 / 2 to zoom the camera in and out. Press 1P Start to resume gameplay.

Pattern Names: AP1 to APEAXS2
This earlier design of the catcher has a chest protector that is missing from the final sprite. The final catcher design also doesn't have side-facing sprites.

Pattern Names: APEBF to APEBS
Sprites for an umpire, a character which is completely missing from the final game.

Pattern Names: BALL, FOLL, GAME, HOME, OUT, PLAY, SAFE, STRI, TIME, WALK
The oldest set of call text is much smaller than the calls seen in the final game and only come in two colors, white and blue.

Pattern Name: DPSUJI
The main number set has tiles for a pizza box opening up and a miniature player head. 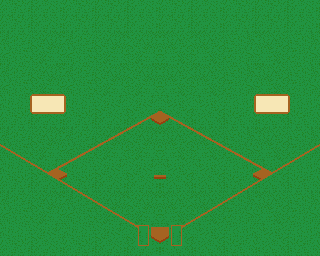 Pattern Names: MARUCJ, MARUCE, MARUCU
The copyright strings in the graphics ROM are all dated 1989; the game patches a "90" to these graphics during gameplay.

Pattern Names: TB1 to TB4
A batter hanging his head in shame while presumably shuffling off the field. Why is he so ashamed?

Pattern Names: TN1 to TN9
Apparently, it's because he hit one of the other players. There are graphics for a downed player, two players with a stretcher, and carrying the injured player off that are never used. It doesn't seem possible for a player to get injured in the final game.

Pattern Names: TT1 to TT7, ATT1
It's a baseball-throwing robot! Maybe injuring the pitcher could have triggered this fellow's appearance on the field? There's no palette that matches the robot in the final game; this is just a guess on how it would look.

Pattern Names: AN51A to AN51C
The female announcer has an unused talking animation. In the final game, the only announcers who get to talk are shown in the high score screen, and they're always male.

Pattern Names: AN6 to AN61C
An alternate design for the female announcer, presumably meant for non-Japanese versions of the game.

Pattern Name: DGMJ
A large seven-segment display that would track the pitcher's throwing speed. This is probably not the correct palette.

Pattern Names: TM, SO
Early "TIME" and "STRIKE OUT" graphics that matches the design of the "GAME SET", "PLAY BALL", and "HOME RUN" text.

Pattern Names: HKAO1 to HKAO5
There are five different designs for the Home Run hitter in the graphics ROM, but only the first one is used.

Pattern Names: JOYS1 to JOYS5
Buttons and a joystick that would probably be used for a tutorial screen in attract mode. Like the pitching robot, the palette for this is just a guess and doesn't actually exist in the game ROM.

Pattern Name: SPDG0 to SPDGM
Smaller graphics for tracking the pitcher's speed, available in both metric and imperial flavors.

The commentators in the high score screen have slightly different designs between versions.

The same change can be seen in the Push Start screen, although the female announcer just has a different palette that changes her hair color and skin tone.

There are 12 teams to select in the Japanese version and 26 in the US version, matching the number of teams (In 1990, anyway) in the NPB and MLB leagues, respectively. 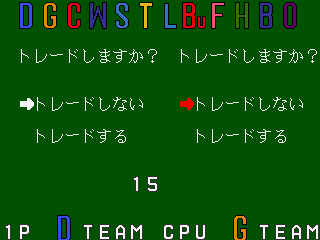 In the Japanese version only, there's an option to trade a player before starting the game.