Dynamite Headdy is an interesting, rather unique game in which you fire your head at enemies and get different heads as powerups. It also doesn't take itself very seriously. 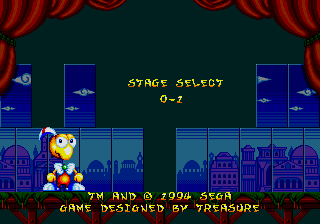 On the title screen, highlight Start Game and press C, A, Left, Right, B. If Headdy says "Nice!", press Start, and you'll be taken to a stage select screen. 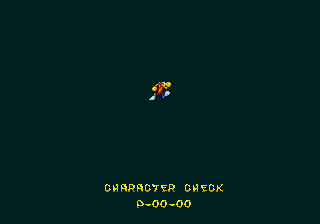 On the title screen, highlight Options and press C, A, Left, Right, B. If Headdy says "Nice!", press Start, and you'll be taken to a screen used to test Headdy's animations. Press Left and Right to cycle through frames. Hold A and press Left or Right to switch characters. Hold C to freeze the animation, and press Start to leave. There are animations for his bodies and heads, though the unused powerup isn't here.

Use the Pro Action Replay Code FFE19E:0180 and hit any HeadCase in Stage 2-2 to obtain this unused head. Unfortunately, it's useless.

Judging from the zeroes for eyes and the cylindrical button on top of the head, this could have acted like a stopwatch, with the Attack button being used to freeze time. As it is now, it's completely functionless.

Since there's already a time-freezing head anyway (which was coded before this head), it's not that big of a loss either way.

There is one remnant of this ability in the final game: The Ticker Head's HeadCase icon

was originally meant for this head, as seen in the prototype ROM.

An earlier, sprite-based version of the Dynamite Headdy sign from Scene 2-2 is loaded in memory at the start of the level. The main differences are a light-blue metal pole, a flatter top, and blander lettering.

The paper stack was changed from a background element to a sprite so it could move when The President slams his fist on his desk. The only real difference is that the sprite is 24x24 while the background-based object is 32x32.

Headdy saying "Hey!". According to this video footage from the VHS Video&Games Vol. 1: Dynamite Headdy from Spain, in an early build this voice clip would've been used when Headdy grabbed a Hangman (4:10, 6:49). Except from this, there's nothing more on this video than false advertising.

The song titled "Next Stage" plays at the end of a level, when Headdy is confused for a bit, and then walks off to the right (not the part where Heather appears, that part plays the theme "Why, Figgy"). Headdy only stays in his place for around 3 seconds, and reaches the other end of the screen, when the music fades out, in the next 5 or so seconds.

But the song goes beyond that. The main part is repeated one or two more times than what you hear normally, and on top of that, the final 4 repetitions of the main melody have less instruments each time.

"Geisha Robot" is the song that plays when the paradisiac background of Headdy Wonderland shatters, revealing Dark Demon's castle. In the international version, after staring at the castle for a bit, Heather jumps right and is caught by the Nasty Gatekeeper. At this point the song ends, after around 11 seconds. However, there's quite a bit more to the song than just that. In the Japanese version, Fingy speaks to Headdy before jumping away, and since the dialog can be read at the player's pace, the song can be played out in its entirety. The track can be found on the Sound Test on the Japanese version, but not on the international version, which means that people outside of Japan can never normally hear the full track.

The game was heavily altered for overseas release, removing and changing tons of random things.

All stage names except for "Backstage Battle" and "Baby Face" were changed to make pop culture references / puns.

An 'H' was added to the life bar (or life light in this case) for the American and European versions. Interestingly, upon opening the Japanese ROM with Tile Layer Pro, you will see the life light with the 'H' at around 000D2000.

The Head Trip power-up (Buddha Head in the Japanese version) got changed from a kanji (which translates to 'Buddha') to ... a head.

This same change is present in Scene 8-3 as well.

Due to reasons (probably the legal department), every instance of the Headdy, SEGA, and Treasure logos gained a trademark symbol in the localized versions.

The sign in Scene 2-2 had to be changed too, with the left and right sides of the signboard flattened to make room for the trademark symbol.

With the names of most of the scenes in the game changed, the continue screen's tattered program sheet had to be rewritten and redrawn.

This "Puppets Introdution" (sic) sign in the Cast Roll was redrawn.

The character was made to look angrier, and his palette changed from purple to brown to reinforce the whole "Bear" thing. It didn't really work; people still think he's a cat. All of Maruyama's boss forms had their palettes changed as well.

These palette changes affect some of the game's enemies and a boss as well, leading to some interesting color choices. Pink frogs, anyone?

The Spider Phantom / Super Finagler's laser graphics were changed as well. The exact reason for this change is unknown, but it is not palette-related.

Rebecca was originally a toy doll, but was changed to a robot.

The character was changed from a geisha to a generic robot. Given the above change, it's likely both were done because someone on the localization team objected to the player being made to harm a human-like female character.

Scene 3-1
The lone HeadCase in this area, located in the Flying Soldier arena, has been removed.

Scene 5-2
The boss fight here is significantly more difficult in the international game.

Before the boss, each power-up appears on a separate screen in the Japanese version. They're all grouped together on one screen in the localized version.

Scene 7-1
In a rather infamous difficulty change, Izayoi / Nasty Gatekeeper's HP was nearly doubled from 9 to 17 HP.

In the international game, Headdy's with Heather as she leaves, and he even waves her goodbye. He's not here in the Japanese game.

So where is he? 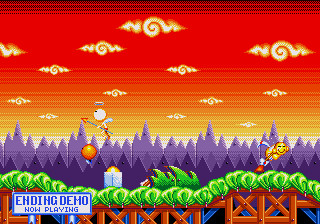 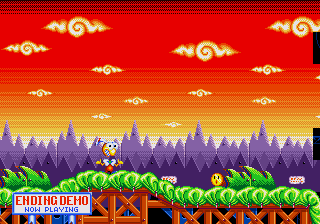 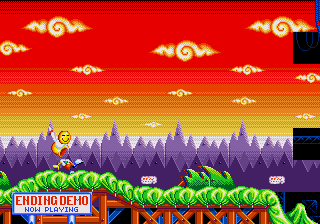 Headdy's too busy trying to pry Smily off of his face. He briefly succeeds, only for Smily to gleefully reattach himself.

Headdy was never heard from again.

The objective was made much clearer in the American and European versions of the game. 'Sub Game' was changed to 'Bonus Game'. Also, the 'Intermission' graphic was reduced in size, and has no gradient.

All three of the messages here were changed as well.

Almost every single character in the cast roll received a name change: