ElecHead has you use your head and behead yourself to solve soreheading puzzles to head to your own doom. Try and wrap your head around that.

A scratchpad of sorts with several ideas for areas.

An empty room with nothing in it.

Battlloon is a promo for the developer's game that was released the year before. You can see it in the Tokyo Game Show demo by holding Left before the game starts, in which you'll be able to access a secret area with this billboard.

There are many, all stored in one tileset (tsBackground). Some were eventually converted to objects.

A toxic waste barrel. The graphic was reused as an object and had its toxicity symbol removed.

Wall corners for the floor.

Barbed wire, with tiles to put holes in them.

A warning sign. Could've been used for the beamer's introduction screen.

Two variants of a bar. It's only here because it's among section 2's tiles.

A vertical hollow pipe. Only the horizontal variant and rest of the tileset is used.

Single metal bar stands. It's too small to stand on.

Seemingly all tiles for the planned fourth section for areas 7 and 8 are here. From these tiles and some leftover objects, it's looks like this section would've been a robot scrapyard.

Stars with a moon. The last one is weird, as by section 3, you are on the moon. The stars were reused for the section 3 background.

3/4th of a pile of robots for scraps.

Computers, which were reused for section 3, but only as objects.

An in-between for the key doors.

Several heads of abandonned robots. The last one was given finishing touches and put in across the stage as an object.

A sign that does not allow robots to enter.

Parts of a portal.

Upside-down monitor stands. The final game uses chains if a monitor hangs from a ceiling.

Faint light. This only exists in the part of the tileset for light up stuff.

An alternate generic block. Only the first variant is ever used.

A short rope, probably meant for hanging monitors to a ceiling.

Horizonal and single danger striped blocks. Only the full tileset and vertical variant is used.

Parts of the ElecHead logo. The final game uses an object for each letter.

Gravel and parts for walls. These don't have light up variants.

A fully functioning wallkick ability can be re-enabled by setting global.canWallKick in scDef to 1. It can be seen in the Pre-Alpha trailer and was disabled in the Alpha Demo a month later, meaning it was either scrapped around that time or would've been an unlockable chip.

A looping buzzing noise that plays when a monitor is turned on. It can be heard in the Alpha build.

A track used for the Pre-Alpha trailer. A fourth section was planned, though this was just a placeholder (a fully completed track for section 4 was composed, however).

At any point during gameplay, press Left Shift + Right Shift + D (keyboard) or Start + Select + A (controller) to toggle a debug mode with extra features to mess around with. 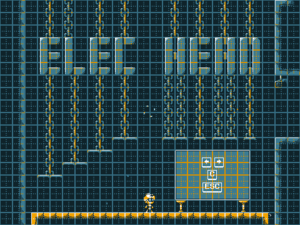 One inaccessible debug feature exists titled keyDebugWarp. The name suggests this would've let you warp to any of the seven teleporters. This was made obsolete when it became a key feature.