Etrian Odyssey is a pretty difficult RPG about crawling dungeons, drawing maps, and falling prey to deadly F.O.E.s all the time.

Many unused items are still contained within the game's data files, namely Data\Param\Item.tbb. While their names and descriptions have been removed in the American and European versions of the game, some of them still do have meaningful descriptions in the Japanese one.

Weapons 68 to 72 again do not have proper descriptions anymore, but have ATK values and prices in line with some of the better staffs.

Weapon 51 has no description whatsoever, but is otherwise identical to Weapon 47. Weapons 52 and 53, as well as 139 and 151 to 155, have no proper descriptions and have some ordinary strength and prices. Of note is, that Weapons 151 and 152 can be used by classes other than the Landsknecht, while every other axe in the game is specific to this class. Both can also be used by Dark Hunters, while number 151 is usable by Bards as well.

Similar to the katanas, Weapons 104, 107 to 111, 140, and 161 to 165, are ordinary bows without proper descriptions, and Weapon 104 is another one with no description at all. Also in line with the two aforementioned axes, the per-class usability is unusual for some of them, such as numbers 140 and 161, these being the only bows in the game usable by Landsknechts. 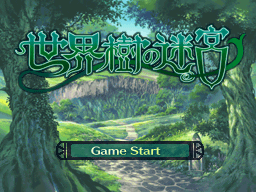 Data\Tex\SampleCamp.ntft and Data\Tex\SampleCamp.ntfp hold the image and palette of a mockup of the main menu screen. Some of the differences to the final menu are that each character's Boost meter is shown instead of their TP, a slightly different placement of the background image, and the absence of the resource gathering counters (Chop, Mine, and Take).

Also of note are the character names used in the mockup. The characters on the front row are called "スティーブ" and "ワンダー", while the ones on the back row are called "キャシー", "ゼタ" and "ジョーンズ". These could be rendered in English as "Steve" and "Wonder", as well as "Cathy", "Zeta" and "Jones", quite likely referencing the musician Stevie Wonder and the actress Catherine Zeta-Jones.

An image simply named "test_en". This appears to be an early version of the Warbull enemy sprite. There are various minor changes, including teeth and horn details. 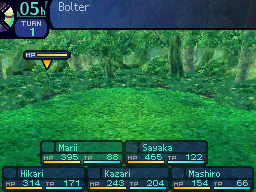 Over 60 of the game's 200 defined enemies are dummy enemies with mostly the same stats, using the same AI and the same (actually nonexistent) sprite. A few of those are noteworthy:

The nine classes names vary across regions, with the European translations in particular using names based on the Japanese and American ones.

European passwords intended for use in Etrian Odyssey 2 have no effect, as it was not released there.