Fantasy Zone is a goofy shoot 'em up starring the living ship Opa-Opa, destroyer of Greek dinner plates and "I am your father" subplots. 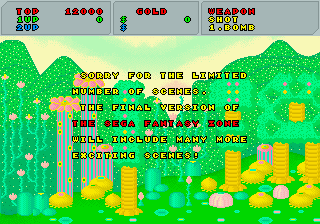 A message from a work-in-progress build is still in the game. The subroutine to display this message starts at 00A4BA, but it's not referenced at any point in the code. Enter this code in MAME's fantzone.xml cheat file and enable it to see this message in place of the high score table.

Two of the songs in the game's earliest revision weren't finished on time. Oddly enough, the original music Easter egg in Super Fantasy Zone uses the early versions of both songs.

In the finished version of the stage clear theme, the clunky sounding percussion section was replaced with trumpets.

An additional lead instrument was added to the finalized version of "Hot Snow." The early version of the song is used (with reduced instrumentation) in the Master System, MSX, and Sunsoft ports, and forms the base for the remix used in Fantasy Zone: The Maze.