Fatal Frame is a survival horror game where you fight ghosts with an old camera.

These can be accessed by changing the byte located at 0xD03BB4BC in the memory (Xbox 360). 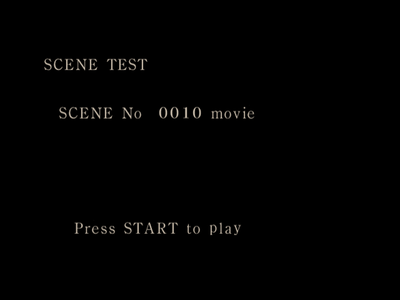 A tool that allows you to view all the scenes and movies in the game. When viewing standard scenes, however, there are a slew of available debug features that affect various aspects of the scene.

Use the D-Pad to select the scene, A to play, and Y to exit to the title screen.

Main Controls
Upon loading a scene, it will automatically play. Press Y to fast-forward, or X to pause and enter frame skip mode. Back brings up more info in the upper-right corner consisting of the frame number and a second value, "reso", which denotes a "sub-frame" if you will and cycles between 00 and 01 on each frame.

Frame-Skip Mode
Press X/Y to step back and forward, respectively. More tools can be accessed by pressing A before the 16th frame in a scene. After the 16th frame, pressing A will just restart the scene.

Before the 16th frame, the D-Pad can be used to switch between tools, assuming there isn't one already in use. These tools don't have names, so names are made based on what the tool appears to do.

Flycam Tool
The first tool, brought up by not touching the D-Pad at all. When the "reso" value is 00, flycam is useless, so just skip a frame to make "reso" 01.

Use the D-Pad to control the camera, with White/LT raising and lowering it on the Z-axis respectively. Holding Black allows you to rotate the camera around. A closes the tool.

Directional Light Tool
Press D-Pad Down once, then A, to bring up all the current directional lights in the scene. Each light can be selected and have its RGB light values modified, along with its power and cone where applicable. D-Pad Left/Right changes the highlighted value by .01, while White/Black jump to the minimum and maximum values, respectively.

Press B to exit your selected option or, if no option has been selected, the tool itself.

AMBIENT
Press D-Pad Down (x2), then A. This tool lets you modify the RGB values of various objects:

D-Pad Left/Right changes the values by .001, with White/Black jumping to min/max like before. Press B to exit.

FOG DATA
Press D-Pad Down (x3), then A. Modifies the fog in the scene, including its color, near/far distance, and min/max alpha value.

D-Pad Left/Right changes R, G, B, and Alpha min/max values by 1, and the near/far values by 10. White/Black jumps to min/max. Again, press B to exit. 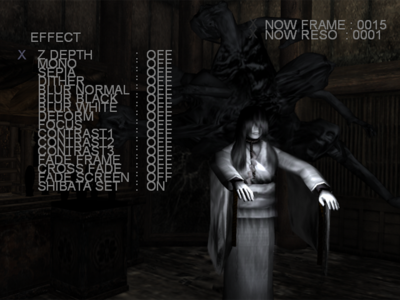 Press D-Pad Down (x4), then A. Turns various effects on/off with fine tuning available for some choices. Refer to the image.

Controls are the same as past tools.

ENE EFFECT
Press D-Pad Down (x5), then A. This tool edits ghosts and their distorting effects.

Controls are the same as past tools. Note that selecting "APPLY" in any of these options will apply the effect to all enemies within the Scene Test until you restart the game.

Same controls as before. 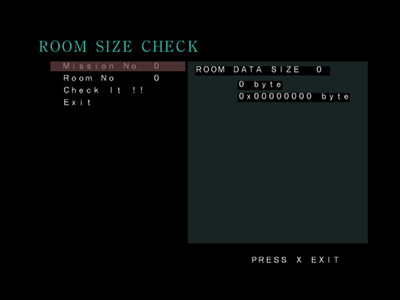 Appears to be broken, as selecting "Check It !!" sends you back to the title screen. The D-Pad is used to navigate and to select mission (night) and room numbers, with A to select. The actual purpose of this menu is unknown.

There are a handful of file photographs that are unused in the game. These can still be unlocked by modifying the RAM. Most of them lack a real title or description.

A slightly distorted image of flowers. Perhaps some sort of test. Description in-game: "( 00)" 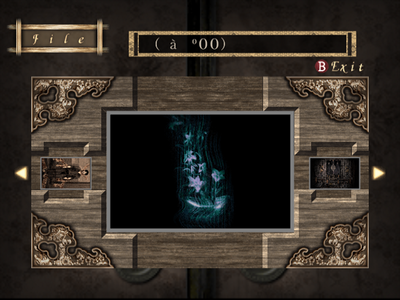 An image of what appears to be an object by the graves in the backyard. Description in-game: "( 03)" 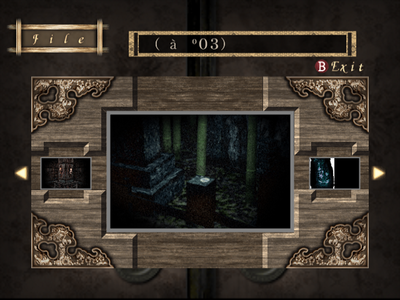 Another image of the flowers. Description in-game: "( 04)" 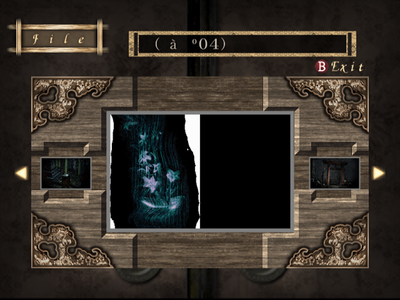 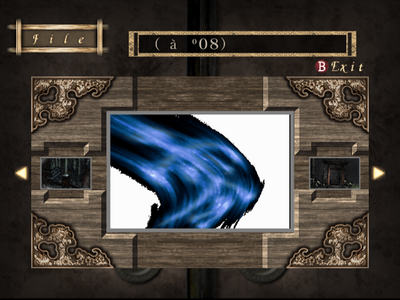 An image of a different distorted blue Japanese symbol (this one looks like 伍, or "five"). Description in-game: "( 10)" 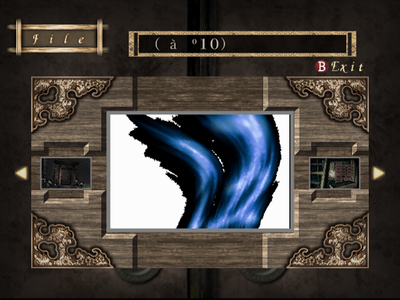 An image of the safe seen in the Tatami Room's Library in Night 2. Normally, you take a picture of the safe to obtain the "Key in the Photo" photo. Description in-game: "( 28)" 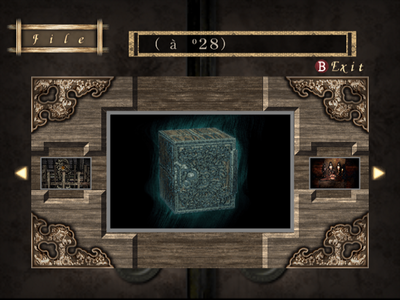 An image of the small house in the Grand Hall, in which a hidden ghost can be found on Night 3. Description in-game: "There is a Shinto household altar in the photo." 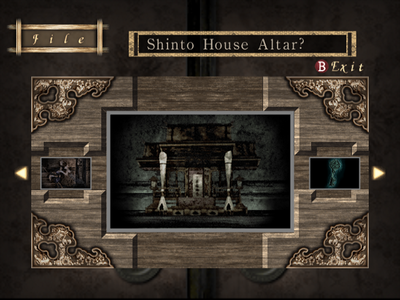 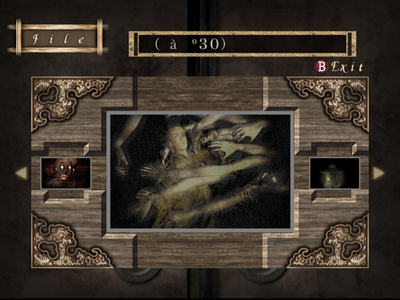 An image of nightstand in the Kimono Room. Normally, you take a picture of the nightstand to obtain the "Ornamental Lion Mask" photo. Description in-game: "Fireplace Room second floor door. It shows some mirror stand." 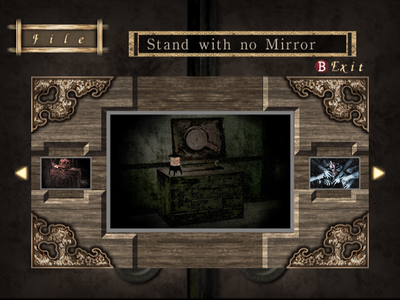 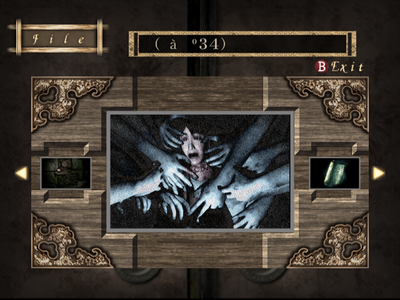 Not sure where this scroll is. Description in-game: "There is a scroll in the photo." 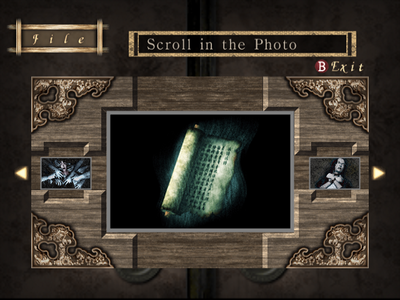 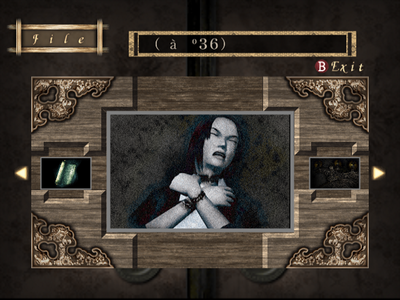