You're out to eat a shark. Not a very big plot line here. Honestly, the real-life plot line that this game was one of the victims of EA trying to retcon entire PopCap games from existence (with the other notable victim being the entire Bookworm series) is more notable than anything else we could write here.

With the data for the other levels, there is an unused level in the folder "edtest". This level appears to have been used during development, as Stun, Shield and Feeding Fury are power-ups in the final game.

The hidden level 0 is accessed by downloading a version of the game with the "resource" and "config" folders, then to copy the "stage," "startscreen" and "completestage" into another level's folder and overwrite the files, preferrably "SmallFishSmallPond". 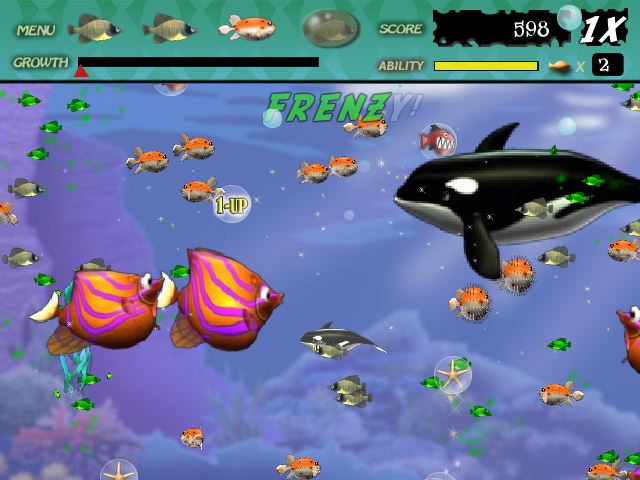 This is the unused level. It has the Big Ridge scene, and is flooded with orcas, angelfish, minnows and pufferfish. It also contains an abundance of poison minnows and mines that rarely remain on-screen due to the swarms of fish. The only powerup seen during this gameplay was the Fury Bubble, the other bubbles were only starfish and extra lives--and yes, that means that the Stun and Shield power ups mentioned in the description are totally absent. The food bank also fills very slowly, but you can be killed very often.

The level is probably this crowded to test the limit of the "Feeding Fury" power-up, and it seems it was set up to be deliberately easy to tweak so it could be used to test other power-ups, like the aforementioned Stun and Shield powerups.

Hidden in the "fish" subfolder of the "config" folder are two unused .xml files for player fish, named "pufferplayer.xml" and "sharkplayer.xml". As shown in the names, they are for a pufferfish player and a shark player--and in fact, these player characters have actual names, despite going unused! The Shark is named "Max", and the Pufferfish is named "Spike".

It seems that they were initial players in place of JD the John Dory, or were otherwise meant to appear in the late-game places that he shows up in, due to their "class" parameter being set to "JohnDoryPlayer".

An unused idle animation for the pufferfish.
While technically not unused, it's normally unseen as idle animations only ever play when a fish is controlled by a player and the playerfish is idle. Due to the unused player XML of "Spike the Pufferfish" being found it was likely a leftover of when it was considered playable as it's the only fish in the final game that has an idle that isn't playable at any point.

The resources folder and all other subfolders have directories from CVS version control.