Ferazel's Wand is considered by many who've played it to be one of the best side-scrolling platformers on the classic-era Macintosh.

A few tracks were left unused for some reason or another, likely because there weren't enough levels where these could be used.

A pause sound used in many of Ambrosia's other games, such as Harry the Handsome Executive.

The frog enemies had their sounds redone at some point, but their old sounds still remain in the final game. 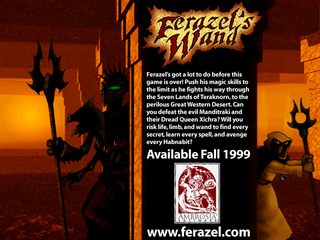 While this screen does appear in the demo version, even the oldest demo version of the game lists a release date of January 2000 and the currently available demo says it's available now. It's also missing the "CD" graphic.

These usually show up near the bottom of the level and obscure the bottom few rows of tiles.

These sprites behave like signs - they trigger a conversation when approached.

The book object has a conversation portrait, but the others don't.

These stalactites fall when touched. Only the leftmost one was used in-game.

Partially-destroyed versions of these bridges appear in-game, but there are also these sprites for the complete versions.

This bridge never appears in-game. It's split into two sprites since one would render behind Ferazel, the other would render on top.

Urchin-like things? These have no animations and appear to be static scenery.

Some larger rocks and plants.

A rat hole and rat. The rats were probably just moving scenery and not enemies; there are no attacking or death graphics for them.

Some dead habnabits and an unused gravestone.

Some furniture with spiderwebs.

There are lots of variations of rocks you can stand on, like these. These are all the unused variations.

A couple of unused chandeliers. These behave like torches and have a health or magic crystal inside.

It looks like there were to be forest nymphs in this game at some point. The blue robed figure has no conversation portrait.

Some kind of worm.

This may have been used after a boss was defeated. In-game, the skull icons on the map remain colored after bosses are defeated.

These are all the spells in the game, as they would appear in the inventory. Ice Crystals and everything to the right of VBlade are unused. Unfortunately, none of the unused spells actually do anything - Ferazel makes a spell-casting motion, but nothing happens.

This is what the unused items would look like on the field.

The Ice Pick also has a field graphic, though it never appears on the field in-game since it's bought directly from a character.

There's also an alternate Red Xichron sprite. This one is a little lighter than the one used in-game and does not spin, but it behaves like the used Red Xichron when you pick it up.

Only two of the unused items actually do anything. The Vorpal Dirk replaces the Dagger when obtained; it's used the same way but does twice the damage. It looks like this when used in the field:

The Mist Potion turns you into a ghost for a short time, allowing you to pass through walls and floors and collect items, but not be attacked by enemies. However, if you don't make it back to your body before the time runs out, you die.

A drop of acid. Might have been meant to appear in The Labyrinth or the caves.

A ninja star of some kind.

In the final game, a unique screen appears upon death instead of a dialogue box.

A level warp dialogue box. In both Harry and Ferazel's Wand, option-clicking on new game brings up a dialog box with a small anti-cheating message.

As Ben Spees, the main creator of this game, worked on Harry the Handsome Executive, it should come as no surprise that some leftovers from that are still in Ferazel's Wand.

A warning about unsupported processors. Ferazel's Wand wouldn't even need this, since it only runs on PowerPC Macs.

Copying machines were used to save in Harry, but they're completely absent here.

This was used in Harry for the general preferences, but they are completely different in this game.

A Scent Of Peril

There is an unused room on the right side of the map containing a ziridium brine pool and teleporter. The teleporter doesn't have a valid destination, so it's not obvious where this would have fit into the level. There is also what looks like a partially-overwritten testing area below this unused room, containing some breakable walls and a large pool of water.

Rendering this level with the foreground tiles partially transparent reveals some detail on what the level may have looked like in earlier versions. The background tiles extend a ways through the wall in the top-left starting area, implying that that room used to be larger in an earlier version of the level. Hidden background tiles also imply that the shield alcove left of the level's center used to be larger as well, and the level exit may have been in a pit beyond the archway, but was later moved to the archway.

Rendering this level with the foreground tiles partially transparent reveals some curiosities:

There is a large system of caverns at the upper-right of the map. Some of the slopes' corners have non-matching tiles and it contains no sprites, so it's likely it was scrapped early in development.

Also, the pool of water in the lower-right corner of the level has discontinuous edges due to several misplaced tiles. These tiles are normally hidden behind the foreground parallax texture.

Past the actual end of the level to the right is another few screens of mean-looking obstacles, then another end of the level with a ziridium brine pool, save point, and some fire seeds to collect. It's likely this was the original end of the level, but the developer decided the level was too long and shortened it by adding the current end. Curiously, the wall above the unused level ending doesn't go all the way to the top and there's a little floor up there, implying that there may have been a secret there at some point.

(Note: the full-size map of this level appears to be too wide for TCRF; this is only the right half.)

The monsters in the inaccessible rooms are the same types that come out of generators in other places in the level. One hypothesis for their existence is that generator sprites may require a sprite to copy in order to work properly, so these are the template enemies for the generated enemies.

The hidden background tiles on this level reveal some interesting clues about its history.

Right near the beginning of the level in the lower-left corner, there are some empty tiles that are marked as destructible by explosions. (This has no effect if the tiles aren't solid.) It's likely there was once a wall here, but it was removed and the destructibility flags were never cleared. 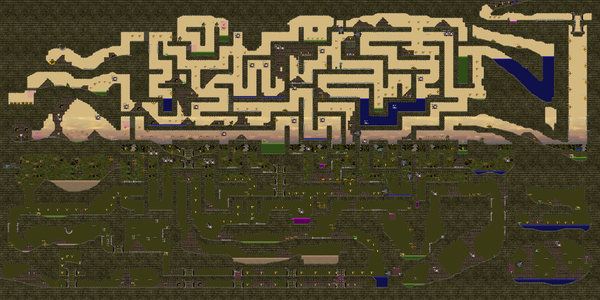 The hidden background tiles in this level show some mostly liquid changes: 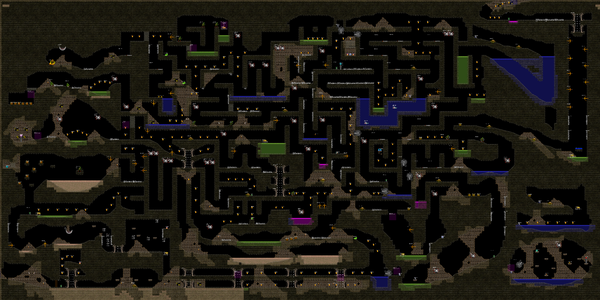 There's a large room above the boss arena. The walls around the boss arena are angled and not climbable, but it's possible to get up there with the Tree Trunk spell. The shape of the room and alcove on the right suggests hidden treasures, like in the Goblin Chief stage, but they were either removed or never added in the first place. The structure of this level does match some structures on the Goblin Chief stage; in fact, the ground floor, upper floor, and upper right alcove of MW appear to be the same as those of GC, but shifted down by 9 tiles. 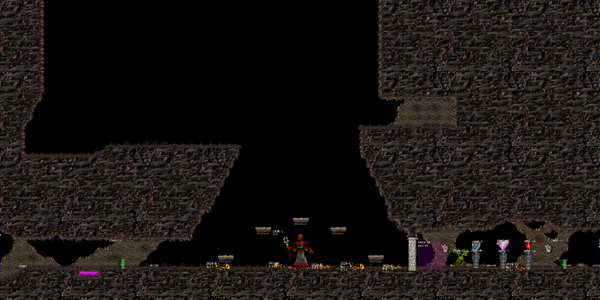 The hidden background tiles on this level show some repetition on the right side, which implies that Goblin Chief was made first and this level was copied from it (and shifted down by one tile, nine times), not vice versa. 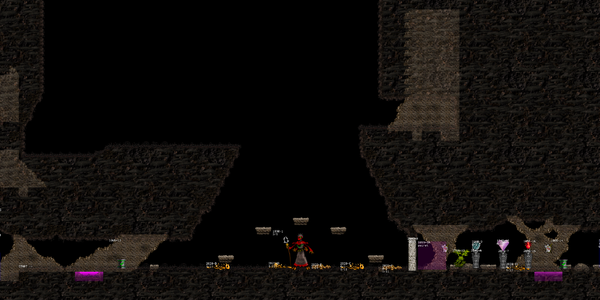 There is an empty unused room at the right side of the map.

There are some hidden background structures and water surfaces under the floor of the starting area on the left, implying that the area's shape used to be larger and more open.

Fire In The Hole

There's a large, empty, partially-overwritten unused area next to the secret areas on the right side of the map. It's likely this was scrapped early in development, since it contains no sprites. It looks like it may have originally been an extension of the end area at the lower-right, since its floor and ceiling could line up with the end area's floor and ceiling.

If You Can't Stand The Heat...

It looks like the end of the top layer of the level used to be about 10 tiles further to the right, since there's a room's worth of background tiles hidden inside the wall there. They probably changed this to force the player to quickly enter the archway; otherwise, the autoscroll would stop there and the player would have time to think, which would be unacceptable.

This level was likely started by copying Manditraki Warrior. The shape of the floor and ceiling to the right of the battle arenas are almost exactly the same between the two levels, and the decorative liquid caves under the arenas are mostly the same shape too. Fire Guardians even has some errant hidden background tiles that map to the water under the arena in MW and the hidden ziridum brine pool (though it is inaccessible in FG).

Ends of the Earth

The rooms on the left and right ends of the map appear to have been remade multiple times - there are multiple non-matching background tile arrangements around them. Also, there is a background layer "wall" inside the wall across most of the bottom of the level.

Strings in the conversation resources are stored as Pascal strings. When a string is overwritten with a shorter string, the extra bytes of the original string are not overwritten, offering a glimpse into what some conversations in the game were like during development. In this section, the red text is from a longer overwritten string and is not visible in-game.

Some individual lines in conversations were changed:

The next shop conversation appears to be completely unused. It's with a person aptly named "Unfriendly Fellow", and goes like this: