Another Satoru Nakajima video game, now renamed to instead feature Formula One's longest running team that had zero wins in 1991 or 1992.

In Japan the game was originally released as an entry in Varie's Satoru Nakajima Kanshuu series of F1 racers, endorsed by former F1 driver Satoru Nakajima, a series where most of its entries were exclusive to the country. Some time after its release Acclaim (under their Flying Edge label) would release it overseas as Ferrari Grand Prix Challenge, as a companion to the NES/Game Boy game of the same name they released that same year (which amusingly also made its way to Japan in its original form, albeit as just Ferrari and by a different publisher), with quite a few differences.

Expectedly, both versions have their own logos, though F-1 Hero MD also features a legal notice for Varie and Nakajima.

The North American/European versions feature a legal notice and a logo screen for Flying Edge before the title screen; the Japanese original just jumps into the title screen after the Sega logo. 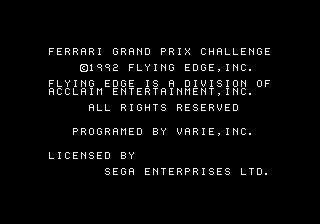 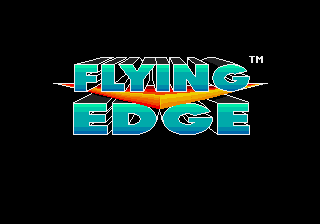 The main menu for F1 Hero MD features a digitized picture of what appear to be race queens, while Ferrari Grand Prix Challenge features an illustration of a woman in a racing outfit with the background from the Monaco course scrolling behind her, as well as moving the "MODE SELECT" box to be on the options box's top left. Three of the modes are renamed, and the text alignment is modified to suit the much longer name for the Grand Prix mode.

As with many other F1 games of the time (amongst them the previous Nakajima Satoru Kanshuu titles), the game doesn't feature an official license from the FIA, so the names of the teams and their drivers are modified. Both versions use the 1991 Formula One Championship as its base, but the names themselves differ between the two: F1 Hero MD does what most games did and just changes one or two letters, while Ferrari Grand Prix Challenge goes for the less legally dubious approach of using made-up names, barring the Ferrari team, which keeps its proper name. Ironically enough, Nakajima isn't actually present as a selectable driver in F1 Hero MD, despite the fact that he was still active in the 1991 season (which would also be his last) as part of the Tyrrell team; his co-driver from that team is represented in this game instead.

Below is a table showing the names used in both versions, as well as those of their real counterparts; driver names will be in parenthesis.

Where the two versions also vary is in the last four circuits, outside those of the main season. F1 Hero MD featured two real-life Japanese circuits plus two original tracks, while Ferrari Grand Prix Challenge replaced the former with two different American circuits while also renaming and relocating the last two.

The Japanese version featured the Autopolis circuit, a circuit that to this day was never used for Formula One, but had plans to do so (hence why it was advertised on Benetton cars that year). Ferrari Grand Prix Challenge replaced it with the Long Beach Grand Prix circuit, more commonly used for IndyCar events, but which was also used for Formula One from 1976 to 1983.

Circuit 18 on F1 Hero MD was the famous Fuji Speedway, a circuit that's featured in multiple racing games over the years (with Pole Position being the first), and which was also where Japan's first Formula One race was held, as part of the 1976 season, though it would be retired from F1 after an accident at the 1977 season and not used again until 2007 after significant revisions. Ferrari Grand Prix Challenge instead features the Mid-Ohio Sports Car Course, which has never been used for any Formula One events, though it has and still is being used for IndyCar.

Circuit 19, an original circuit made for the game, had its name changed to take place in the town of Oyster Bay in New York.

The generic oval course had its name changed on Ferrari Grand Prix Challenge to instead be the famous Indianapolis Motor Speedway, which would be part of Formula One from 2000 to 2007, but on an infield course instead of the oval as in this game (the Indianapolis 500, which used the oval track, was part of the Formula One World Championship in the sport's first decade, but saw little European interest). Despite this, the oval in both versions features right turns, while most American oval tracks feature left-turning turns.

The password screen on the Grand Prix mode features a full alphabet, while the US version removes the vowels (as was common with many other games) as well as the Y, and replaces those with numbers 1-6.

Before every race on Grand Prix mode in F1 Hero MD, you'd get an introduction of the circuit by Satoru Nakajima. Ferrari Grand Prix Challenge removes these, albeit in a somewhat sloppy way, as the background music starts normally and immediately restarts, as it essentially skips the now non-existent screen. 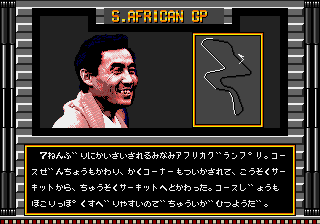 The car setup menu on Ferrari Grand Prix Challenge changes the "HP" stat to instead be "DUR" ("durability").

The screen you get when retiring from a race (by pausing and pressing A+B+C together) differs between the two versions. F1 Hero MD has a large "RETIRE" appear, while Ferrari Grand Prix Challenge has a smaller "RACE OVER" instead.