This is a sub-page of Fire Emblem Echoes: Shadows of Valentia.

There is a full set of four archive files for portraits which, judging by the file name, were meant to represent the Creation/Grima in a younger, pre-fell dragon form:

Their contents are exact duplicates of the regular necrodragon portrait files. In the final game, the Creation's history before becoming a fell dragon is only mentioned in passing in Forneus's writings.

Silque has a portrait depicting her fainted for when she is first encountered. It is only seen as a zoomed-out "adventure" portrait in-game, but it has unused bust and face crop counterparts. Each also has a pair of blank 32x32 textures which were meant to be blushing and teardrop textures.

There are two placeholder archive files for the backstory characters Liprica and Lima IV. Both only contain crops of Rinea's portrait with slightly different coloring and the character's name written on top, but oddly enough, they bothered to make one of these edits for every possible portrait emotion using the matching Rinea expression, which are all included as textures in the respective archive files (the "default" expression is pictured above).

The traditional Fire Emblem placeholder silhouette is back yet again, with a set of three archive files. Oddly, these are the only portraits in the entire game that are left sitting in the root of the face directory, rather than being sorted into the "enemy", "monster", "job", "npc" or "player" subdirectories.

An early portrait of Alm zoomed out to an "adventure" portrait-like size, located in face/face/player/アルム全身_bu.arc. It is very close to the final version, minus featuring a different pose with Alm not having his right hand on his hip, and what appears to be a headband (similar to Alm's original design in Gaiden). Bizarrely, this portrait is at a resolution of 128 x 128 pixels - all other "adventure" portraits have a resolution of 128 x 256, even the placeholder silhouette.

Almost every class in the game has a complete set of all four portrait types for its generic enemy members - "adventure" (_adv.arc; pictured below), regular bust (_bu.arc; pictured), face crop (_tk.arc), and large stat screen (_hr.arc).

Eight of these classes only appear among enemies as Spectres or Death Masks, so their unmodified human portraits and large stat screen versions are never seen, while the female paladin and gold knight both have their portrait sets go completely unused. Blue recolors of the cleric and priestess portraits are encountered as NPCs in certain locations, but the red portraits are never seen.

Only the saint class is completely absent from this collection, although it has a blue recolor for NPC appearances which is used as the basis for its Spectre/Death Mask edit. The blue portrait doesn't have a large stat screen version at all.

There is also one placeholder archive for each of Alm's classes, which are also just Rinea crops. Celica's classes have no corresponding files at all. Oddly, a third Rinea placeholder intended for generic clerics can be found in the NPC portraits folder, right next to the used blue recolor of the actual portrait.

Almost every portrait in the game has a matching "adventure" portrait ([character name]_adv.arc)- smaller, zoomed out, full-body counterpart for use in appearing in "hubs" as characters to meet - but only a tiny fraction of these are ever used. This includes most bosses, all generic classes and monsters in all available genders, and the younger versions of Alm, Celica, Gray, Kliff, Tobin, Faye and Conrad.

The only characters who don't have "adventure" portraits are Lawson, Mueller, Mikhail, Wolff, Magnus, Marla, Hestia, Jamil, Jerome, Zakson, Xaizor, Cerberus, Naberius, Argentum, Aurum, Hades and Gharn (none of whom have "_adv.arc" files at all), and Duma in his dragon form and the Creation (whose "_adv.arc" files are just black placeholder boxes). The only missing classes are the saint (see above), the dagon and the fire dragon (both of which also have black placeholder boxes).

A few placeholders exist for the 2D scenes in-game. 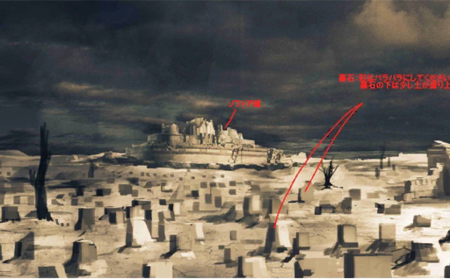 The model for this scene where Mila's Turnwheel gives Alm a vision contains a hidden layer with a preliminary version of the scene. 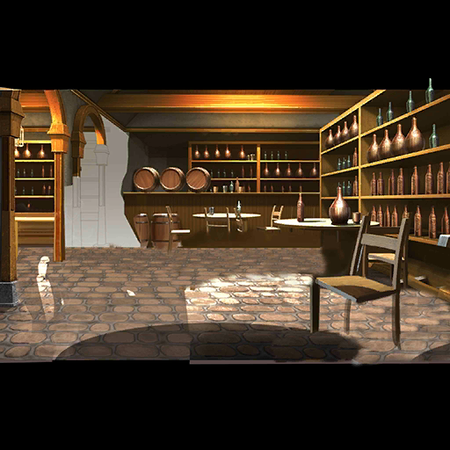 The texture used for the background on Saber's recruitment CG contains an unfinished, unseen drawing of a ladder. In the final game, this portion of the texture is covered up by Saber's torso.

The model for this scene from the end of Act 1 contains a hidden layer with concept art for the final scene. It's at a much higher resolution than the version used in-game, too!

The five swords used by the amiibo characters - Marth's Exalted Falchion, Lucina's Parallel Falchion, Ike's Ragnell, Roy's Binding Blade and Corrin's Yato, in order of appearance in the ui/mat/icon.bin file - all have unique full sized icons, but since these weapons are never displayed on their profile pages, the icons can never be seen ordinarily.

Additionally, numerous items that are only added to the game in DLC already have their icons in the base game, in both the full sizes and the smaller, sepia variants used when mousing over a unit who holds them. In order of appearance in the icon file: the astral shards, the Star Jacinth, the Pitchfork, the Talisman, and the four Japan-exclusive Cipher accessories. Curiously, the icon for the Vagabond's Hairclip is the last icon on the ui/mat/icon.bin sheet while the other three Cipher accessories are placed earlier, before the icons for the memory prism and all of the marks.

Spectre and Death Mask map sprites exist for almost every human class in the game, and while the majority of them are used, there's still a handful which never see the light of day. It is likely that these exist as a fail-safe, in case the game is ever suddenly required to spawn any of them.

The girl class used by Celica and Faye in the prologue is the only class that's missing either of these sprites, and even then, all it's lacking is a Death Mask set.

The seven amiibo characters - Marth, Roy, Ike, Lucina, Robin, and the two Corrins - are only ever seen in-game as glowing, vaguely faceless Illusions, but all of them have a full set of map sprites in a clean, non-ghostly state in colors for all three affiliations. The Illusion sprites are kept in a pre-assembled state in the unit/Unique/ directories, while the clean sprites are split up into body and head sheets which are kept in, well, the unit/Body/ and unit/Head/ directories.

No other assets exist for non-Illusion versions of these characters. It is likely that these also exist as a failsafe, as if you hack a character into one of these classes, these sprites are what you'll see.

One of Marth's non-Illusion sprites actually did see the light of day in the non-Japanese limited editions: the pin depicting him uses the second standing frame from this set.