"Once upon a time, there was a game named Fire Emblem Gaiden and a game developer named Intelligent Systems, who remade each other bitterly for an age."

"Hey, why did Fire Emblem Gaiden and Intelligent Systems have to cut so much? Couldn't they just say they were sorry?"

The game's internal project name is "Iron16", judging by several files which bear this label. This continues the pattern set by the other two 3DS Fire Emblems - "Iron" being a pun on the abbreviation "FE" (the chemical symbol for iron), and "16" for this being the sixteenth main Fire Emblem game. Interestingly, this means that BS Fire Emblem: Akaneia Senkihen is counted as a discreet, mainline Fire Emblem game.

Shadows of Valentia's art scenes (sometimes called CGs, for computer graphics) are not named in the game. However, in the game's files themselves, they have descriptive and occasionally humorous names. Anything particularly interesting is bolded.

The message archive file m/(language)/Name.bin contains several character names which are never used at any point.

Additionally, there are duplicate name strings for the majority of the game's classes listed as character names (MPID; the actual class strings have the prefix MJID and are stored in a different file). Some of them are used when visiting locations, as the names of generic members of the respective classes who the player can talk to.

Name.bin also has a complete set of specific name and description strings for each variant of the Invoke and Conjure spells. In the finished game, like in the original Gaiden, every variant is just called "Invoke" and "Conjure" without mentioning what it specifically summons.

Name.bin contains the name strings for every location on the world map, and among them is a set of labels for paths between individual locations. In-game, text associated with these "locations" is never displayed.

This contents of this message file (the Japanese part of its name translates as "TestMap") are completely unused.

Every time the player is shown the end-of-battle results screen, one character will make a remark about the army's performance in the preceding battle. In-game, the player only gets these remarks as voice clips, but every one of them is also unused in text form in Result.bin. Unlike the rest of the game's dialogue text, these are just plain text strings which do not include instructions to display speaker names or portraits, or to play the matching sound clip.

Several characters have voice clips for the end-of-battle results screen that are intended to play if Celica died in the preceding battle. However, as per usual for Fire Emblem main characters, Celica's death is an automatic Game Over in all circumstances, leaving no way to ever see these. It's possible that Celica was intended to stop being a main character in the postgame, similar to how Sothe stops being a main character in Radiant Dawn's endgame. In the final release, the postgame allows the player to choose either Alm or Celica to lead the party and be forcibly deployed to every battle - but the other character's death will still result in Game Over. Like the rest of the results lines, these are also kept in text form in Result.bin.

Several files contain strings for menu functions which were in the previous 3DS games but do not appear in Shadows of Valentia.

16 seconds of silence. It might technically be used, but we'd never know.

Similarly to Fates, quite a few test models remain. This time, a few use assets from Gaiden itself.

There are a lot of map models which consist of only a single texture laid out flat each. Each uses an original Gaiden map as its texture. 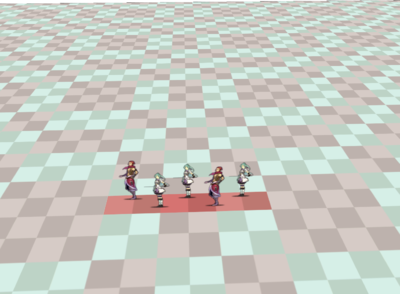 This is a test of the "hubs" where you meet characters in villages. The two test characters in question are actually from an old, Japanese MMORPG called CroXino which Hidari, the lead artist for Shadows of Valentia, worked on. 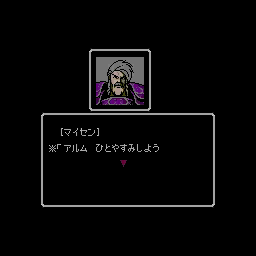 The sleep.bch model contains a screenshot of Mycen's first line of dialogue in the original Gaiden's opening cutscene (albeit with the village background removed). When one considers the text on the image, the model name makes sense...somewhat.

Both Berkut and Fernand - who only appear as bosses in the main game - each have a nearly complete set of voice clips and text strings specifically for being playable units. They only lack a set of base conversations, something possessed by every actual playable unit except Alm, Celica and Mycen, and character endings.

Fernand is playable in two of the Rise of the Deliverance DLC maps, but because those maps do not feature the end-of-battle results screen and do not allow him (or any other unit) to gain experience, levels or change class, most of his dialogue still goes unused.

Despite all the dialogue they have, neither Berkut nor Fernand have actual surviving data as playable characters. However, the data/Person.bin file may have a hint about plans for the characters.

The person ID (PID) entries for Fernand's three enemy appearances - PID_敵フェルナン３章１, PID_敵フェルナン３章２, and PID_敵フェルナン４章 - all label him "Enemy Fernand". The only other PID entries which are specifically labelled "Enemy" are for the enemy versions of Delthea, Zeke, Sonia and Deen, to distinguish them from their regular playable selves. No other enemy or boss unit is marked this way, since it would be redundant given the total lack of playable status.

All of this implies that a non-enemy version of Fernand existed at some point but was removed. Since Berkut does not have the "Enemy" label on any of his PID entries - PID_ベルクト３章, PID_ベルクト４章, PID_ベルクト５章, and PID_ベルクト５章Ｈ - he might not have ever had playable data (dialogue and voice clips aside, anyway).

All of these voice clips are found in the sound/@E/Iron16_Sound.bcsar archive. 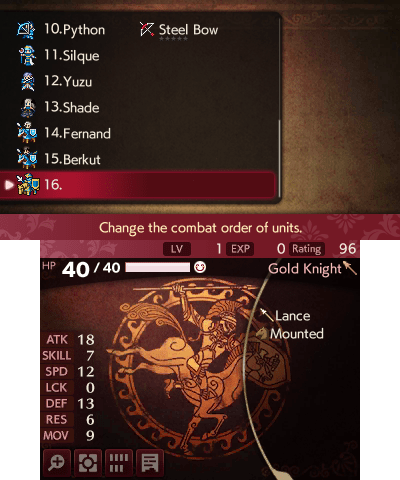 Data/Item.bin references IDs for two items which otherwise don't seem to have any surviving data or stats: the "fiend's lance" (IID_魔人の槍) and the "titan's axe" (IID_タイタンの斧). Since there's no other data left for them, there's no hints as to what they might've been for, aside from being connected to the monster species.

The file also lists IID slots for 20 memory prisms; only 10 exist in the base finished game, and only 3 more are added by DLC, leaving 7 empty listings. These don't have any other data, either.

There are a sizable number of abandoned spells and skills, most of which originated in previous Fire Emblem games. Some of them don't actually have proper help text in any language, with the respective strings just repeating the skill's name as a placeholder, while a handful don't even have surviving name strings at all.

Please note that in the video demonstration to the right, these skills underwent some cosmetic hacking to give them proper descriptions and to assign them to equippable rings that don't actually exist in any form.

Every unit in the game is assigned a hidden age stat, which has no use by itself but is related to an unused item property which would have prevented provisions from being consumed by units whose age is less than 20. Rather than the age function working as a simple yes/no flag, every playable unit is assigned an age that is realistic for the character:

This ability was most likely intended for the four alcoholic provisions - the wine, ale, leftover ale, and Ram wine - which in the final game are the only provisions that cannot be consumed by anyone at all. This may have been removed because it provided an inherent disadvantage to underage units. As a side effect of being left unconsumable, the four alcohols all have recovery values programmed in that go unseen and unused: the wine, ale, and leftover ale would all restore 10 HP and 10 fatigue points each, while the Ram wine would restore 30 HP and 20 fatigue points.

To clarify, no version of the game allows the alcohol provisions to be consumed; this is not something that any localizations censored.

There is a set of eight items - the Seven Sword, Eleven Shield, Boiled Chicken, Moist Bread, Spicy Chicken, Mille Crepe, Chicken Link, and Pure Honey - which are present but inaccessible in the game by itself, but which were distributed in a Japanese event held by the 7-Eleven convenience store chain. All of these are currently inaccessible outside Japan, since 7-Eleven is not in the habit of holding game events like this in other countries. It is possible they will be released by some other means in the future.

The following dialogue and assets relating to the Flashy Man, the NPC from whom players collect these items after using the distribution event, are also currently unused outside Japan.

The Fire Emblem Cipher trading card game's June starter deck contains a download code which adds four decorative items based on the card game's mascots to Shadows of Valentia: the Hard Worker’s Ribbon, the Black Crescent Moon, the Warrior’s Warding Bell and Vagabond’s Hairclip. Since the card game is Japan-exclusive, the download codes do not function in international releases and the items are not otherwise available, but all of their icons are still in all versions of the base game.