Fire Emblem: Shadow Dragon is a Nintendo DS remake of the original Famicom game. It was released following Marth's debut in Super Smash Bros. Melee, which no longer gave Nintendo an excuse to keep the series Japan-only, so they finally localized one of his games for the rest of the world. Things didn't turn out so well for the sequel though.

There are several unused portraits:

Fire Dragon, Mage Dragon and Divine Dragon exist as separate classes, but without fully working map animations; their statistical data is actually used when fighting using dragonstones. There is also data for male and female Cavaliers on foot, which probably meant dismounting (like in Mystery of the Emblem) was planned to feature at one stage.

The Torch item, which is used to increase a unit's vision in fog of war maps, is present in the game's data. It was likely cut due to the fog of war mechanic being exclusive to multiplayer versus matches in Shadow Dragon.

Blonde and purple hair for women are both fully implemented and functional in Shadow Dragon, even though they wouldn't actually be used until New Mystery.

The My Unit feature, which allows players to create their own character, may have been planned to debut in Shadow Dragon, instead of New Mystery of the Emblem. In the game, there is an unused and untranslated heading for a "My Unit Registration" and "My Unit" is spelled in exactly the same way as the custom character in New Mystery and Awakening. 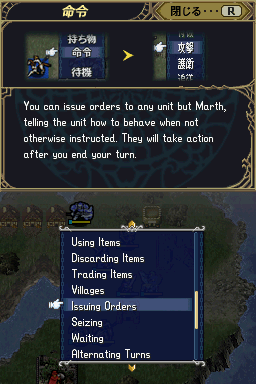 It seems Intelligent Systems were planning to implement the ability to issue orders to units, like in Path of Radiance and Radiant Dawn, but this was dropped at the last moment for this game and New Mystery. This function would have been used to tell all units, besides Marth, how to behave when you end the turn without manually giving them instructions.

The graphics for a tutorial about issuing orders can be found in the game, unused. The US version has the text translated, but not the graphics: they couldn't make a screenshot of a scrapped feature, after all.

Text for this feature is still in the ROM:

A certain tile in Chapter 12 is defined as a Forest tile, even though no forest is actually visible on that tile on the map. Since a forest tile is present at those coordinates in Shadow Dragon and the Blade of Light, the developers most likely just forgot to place a forest tile there when recreating the map's visuals for the DS remake. 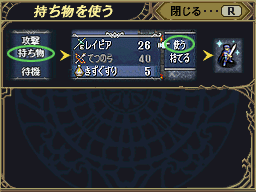 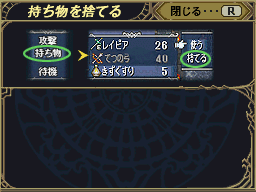 In the Japanese version, there are two tutorial images showing five-use vulnerary. In any public releases of the game, including the JP version, each vulnerary can be used up to three times.