Fire Emblem: The Sacred Stones is the third and final Fire Emblem game released on the Game Boy Advance. In this game, we follow a pair of blue-haired twins on their quest to find out why their best friend hates them.

It's also widely regarded as the easiest of all the Fire Emblem games, and it only lasts about 22 chapters. At least it brings back the map system from Gaiden and a dungeon for you to grind your units (which makes the game even easier).

Some debug menus from the prototype were left in the game, albeit in a partially dummied-out state, and can be accessed by hacking the game. For information on their former full functionality, see the prototype's sub-page on the topic. 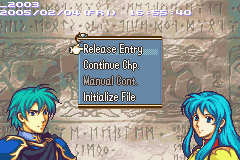 The menu that appears in the prototype upon starting the game. It is missing some features compared to the prototype, most notably the options relating to the world map and the chapter/level warp. The present options appear to be functional and do the same things they did in the prototype. The portraits will also sometimes change seemingly randomly after booting up, though what causes this is currently unknown. 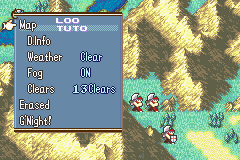 Another debug menu which remains in the final game; however, this one is much less functional, as it also has features removed compared to the prototype. The map warp at the top is no longer functional, and either resets or crashes the game. "Info" does nothing; in the prototype, it displayed numbers on the right side of the screen relating to what is going on in the game. "Weather" also seems nonfunctional, though the fog enabling/disabling still works. The game clear modifier also still works. The data erase feature seems to be as functional as it was in the prototype (it offers to erase data, though it doesn't seem to do so even if the player confirms the option). G'Night! puts the game into sleep mode, which cannot be done by the average player under any other circumstances as there are no menus in the normal game that allow for sleep mode to be accessed.

Remnants of the first Game Boy Advance Fire Emblem title's downloadable trial map functionality remains in this game's data. This is curious, as it was removed from the second game. It is currently unclear how functional this data is. No trial maps, downloadable or not, are known to have been planned for The Sacred Stones.

The placeholder portrait from the prototype and Fire Emblem, complete with a small portrait for use on maps. Most NPC portraits have this little dummy portrait associated with them, though the player never sees them, as generic NPCs tend to use a different alliance-type icon for their mini icons.

An unused portrait set for a minor bandit character. His character data even gives him a name... "Bandit".

An unused recolor of Novala's portrait where his robe is grayish green with a brown front part, instead of brown with a light purple front part. Interestingly, his in-battle graphic does depict him wearing a green robe.

An unused small portrait for Myrrh with her dragon wings out. In the final game, only the wingless variant of this portrait ends up being used.

An unused small portrait for Morva in his human form. In the final game, he can only be seen during battle in his undead dragon form.

A number of The Sacred Stones' early-game bosses suffer from similar issues to Erik from The Blazing Blade: their proper intended battle palettes are only set to be used when they're part of the Player faction, while their Enemy faction palettes are all very generic-looking and similar, if not identical, to the actual generic enemy palettes of their respective classes.

Interestingly enough, there are also two completely unused battle palette IDs; 0x0F and 0x4A. These seem to be intended for Ewan as a Bishop and Knoll as a Sage, respectively, judging from their labels and placements within the palette order. In the final game, Ewan cannot become a Bishop, nor can Knoll become a Sage. Even if they could, however, neither of these palettes is assigned to any class in their palette lists.

Both the Knight and General variants of the Triangle Attack from Fire Emblem: Fuuin no Tsurugi are present in the game and fully functional, but unused.

The female Shaman and Druid animations from Fire Emblem: Fuuin no Tsurugi are fully implemented but completely unused. The corresponding map sprites were not carried over.

A battle sprite set for a male Archer using a ballista exists; normally, when any unit uses a ballista, the game always defaults to map animations.

Both the Mogall and Arch Mogall enemies have some frames that don't seem to display properly in-game, which appear to have been intended for their critical hit animations. Specifically, the missing frames are the ones that loop during a spellcasting animation. During the critical animation, their eye's sclera turns black, and their iris red. However, in-game, the loop frames revert to the classes' usual white sclera and pink iris.

Several map animations are unused leftovers from Fire Emblem and Fuuin no Tsurugi:

The rain, snow and sandstorm weather effects from Fire Emblem are still present in the game, and so are their movement penalties. The aesthetic-only fire "weather", used in Chapter 8x of The Binding Blade and in cutscenes in Fire Emblem, is also present.

The unused "DUMMY" Mine item turns out to be fully functional, hurting any unit that steps on the tile it is placed on. Thieves and Assassins still interact with Mines like in the previous game, by disabling them or picking them up, respectively. However, the Rogue, the new Thief promotion and counterpart to the Assassin, was not programmed to interact with mines, and takes damage from them like normal units.

The unused "DUMMY" Light Rune item also turns out to be fully functional, preventing any unit from stepping on the tile it is placed on.

The spike trap graphics from Fire Emblem: The Binding Blade are still present, though their actual trap behavior isn't.

During the game's intro, there are graphics in the shape of each country which are used to highlight said country as the narration discusses them. One unused world map highlight exists in the game with the label "?"; its shape seems to match up with Darkling Woods, the location of the game's final chapter.

Two of the world map location icons have hidden labels written with their icons. By the Renais Castle graphic is "ルネス", which reads Renais, and by the Caer Pelyn graphic is "ポカラ", which reads Pokara, the name of the village in the Japanese version.

The full-screen graphic for Fuuin no Tsurugi used in the previous game's linkup feature is still around in this game, albeit lacking its corresponding palette.

There are a few unused status conditions in the game: 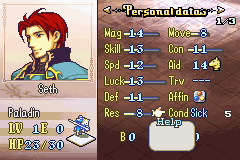 The unused dancer ring items work as they did in Fire Emblem, providing their respective stat-increasing boosts for a single turn. It's worth noting that while the items are fully functional, the text marking the status condition on the unit window was left untranslated in all localizations.

While not unused, the hatching mechanisms for Gorgon eggs are a hidden status effect, named "--" if viewed on the stat screen.

One used weapon also has an effect that cannot be seen in normal gameplay. The game's final boss, the Demon King Fomortiis, has an area of effect 'staff' called Nightmare that inflicts the sleep status on all player units within 3 tiles. The weapon is programmed to give a +5 defense and +5 resistance bonus when equipped... but Staff weapons can't be equipped.

The test map from the prototype still exists in the final game.

The portraits of Rennac, Innes, and Glen that appear in the game's intro are slightly different from the ones used in the actual game. Specifically, the shape and shading on Rennac's hair is different, Innes' clothes are drawn slightly differently, and Glen's armor is lower than in his regular portrait. These portraits are different from the prototype versions as well, so they're likely intermediate revisions.

The game's Easy mode unsurprisingly has forced tutorials, yet you can break out of them with a button combination. To do so, hold any direction on the D-Pad, then also hold A, B, Start, and Select to exit the current forced tutorial segment. The player needs to be careful when inputing this code, however, as this button combination includes the one for a soft-reset in it, so if you don't hold a D-Pad direction first the game will probably soft-reset. This code also turns out to not really be that useful, as the game will sometimes force you back into the tutorial again, depending on what part of the tutorial you exited.

This function also exists in the prototype for The Sacred Stones, as well as the previous game and its prototypes.