Fire Emblem Fates continues the foundations laid by Fire Emblem: Awakening - this time, the player avatar is the main character whose decision to buy either of its two versions, Birthright or Conquest (or even its $20 DLC Revelation), will decide the fate of the continent.

In essence, it's three games for the price of two.

There are a few items in the game's code which go unused.

There are two particular accessories which go unused in all versions of the game.

Besides the Visitor and Battle rewards, there is a third kind of redeemable rewards in the game that went unused and whose requirements are unknown; its final unlockable item would have been the Master Emblem, while the rest of the rewards consists of items which are either rare, availably only via DLC, or also went unused.

There are four skills which are never used in any capacity in-game. 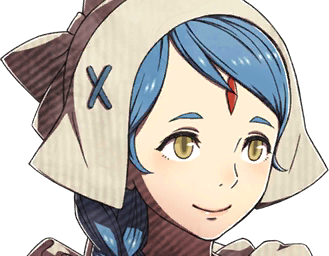 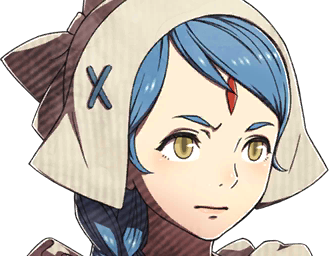 Human Lilith has two critical hit portraits, yet she isn't an actual unit. Notice how her shoulders are missing a frilly thing on the second portrait. 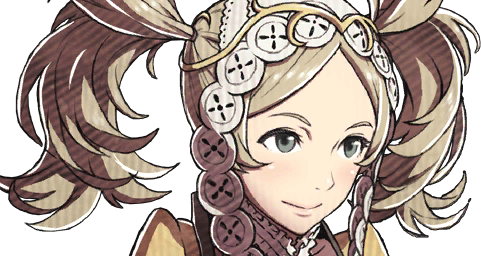 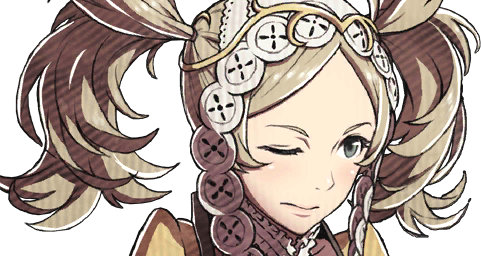 In the DLC mission Before Awakening, Lissa has two critical hit portraits for use when getting, well, a critical hit. However, in the DLC proper she's a Cleric, a class that can't attack, rendering these portraits unused. Like all of the other Fire Emblem: Awakening art, Lissa's portraits were redrawn to fit the art style in Fates.

The capturable characters, with the exceptions of Kumagera and Tarba (theirs are completely transparent), as well as several story characters, have blushing graphics for their character portraits. However, there are no scenarios in-game where these graphics could have been used.

Niles has an eye hidden underneath his eyepatch on his Private Quarters model. It is not rigged to any animations, nor is there anything underneath, and so remains perpetually closed. 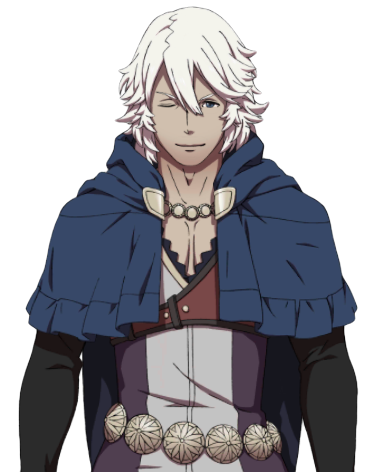 Peri also has a hidden eye underneath her bang. It is also not rigged to any animations, though unlike Niles it can actually be moved using Live2D Viewer. She also apparently has heterochromia. 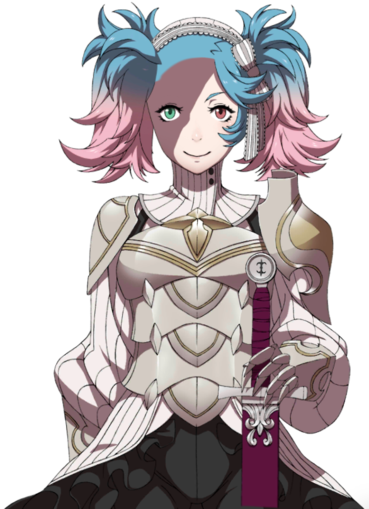 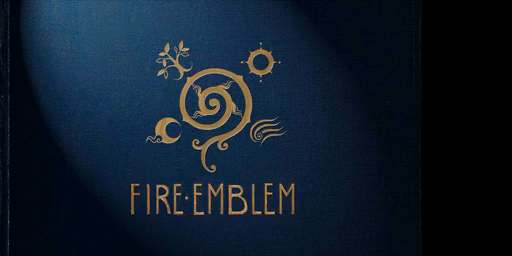 This "Debug Title Screen" has an early Fire Emblem logo on it. 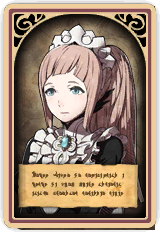 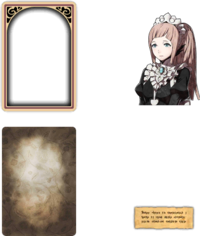 A test Einherjar that features everyone's favorite incompetent maid! The textures for the card, her portrait, the background, and the textbox are all separated on the texture. The model's texture is called "mahu2014 Test" internally.

There are 45 unused dummy models located in /castle. 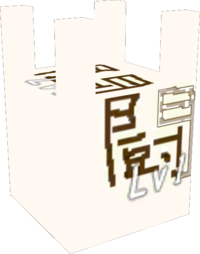 A dummy model of the first Arena.

The textures used for the casting of Nohrian spells contain actual text, using a mix of the same cipher as the "Ancient Texts" in the Record Hall and regular letters. If that didn't seem odd enough, they decode to real words in Romanian.

This is used in the air and decodes to "WU platesc deșertul de la ai si provin dintr o distanță și am suficient si arata un bloc stil Chinezesc de caracterul meu la față", which roughly means "I pay desert from you and I come from a distance and enough style and shows a Chinese character block my face", or not much. Note that the font is slightly different to the "Ancient Texts" one and also contains uppercase variants of some letters.

A simple English debug font. This exact font also appeared in Fire Emblem Awakening. The font itself is located in the "font" directory.

Debug text remains in a text archive called, fittingly enough, "Debug". The text inside was translated to English.

TimeStamp.txt, located in the Debug folder, contains a build date and revision version.

One of the unused item names is "Mire", the Japanese text for it, "スライム", translates to "Slime" in Japanese, and has no description assigned to it. The Mire tome has appeared in previous Fire Emblem games, and in Awakening proper it was a long-ranged dark tome.

There are also "Promise Seals" from 01 to 03, which are also unused but do have a proper—if vague—description assigned to them, alluding that it would've allowed units to change class. Perhaps it may have been early versions of the Partner-, Friendship-, and Eternal Seals?

Lastly, there's mention for two scrapped bullion items: Bullion (S) and Bullion (M) —"金塊（小）" and "金塊（中）" in Japanese— whose description states they could have been sold on the shop to earn 1,000 or 5000 Gold respectively, similar to previous Fire Emblem games.

Izana's unpaired ending, identical to his in Birthright and Conquest.

Izana's generic paired ending, identical to his in Birthright and Conquest. Note that he can only marry the avatar, so this would be unused even if he was playable in Revelation.

A paired ending for Izana with the avatar which is exclusive to Revelation, suggesting that he was recruitable at some point.

Scarlet's unpaired ending, identical to hers in Birthright.

Scarlet's paired ending, also identical to hers in Birthright.

Gunter's paired ending, which goes unused because he cannot support in Revelation.

Before the final battle of the Birthright and Conquest routes, all characters deployed in the previous chapter who remained standing call for Corrin so they can recover their senses and properly confront the route's respective final boss alongside them. Because of this, all playable characters have unique quotes written for those moments, including the ones who through normal circumstances cannot be recruited in Birthright/Conquest respectively.

Interestingly, while the Japanese quotes are shared between both routes, the English script uses unique lines for each scenario instead! Fuga's lines go unused regardless of the language, however, as he's unique to Revelation, which lacks a counterpart for the scene in question.

Do note also that Corrin's name (or "カムイ") in-game is swapped for whatever name the player had assigned My Unit at the start of the game.

Digging through the game's files reveals there were plans for a few support conversations which never saw the light of day one way or another.

The are no official English or international versions of these supports, as the files are only present in the Japanese and Korean releases of the game.

Azura and female Kana—as a mother and daughter respectively—have data for route-specific supports with each other, which happens to be a feature that Corrin's supports with Azura do have in the final game.

Meanwhile, Azura and male Kana have data for one non-specific support chain with each other as mother and son, which is striking considering that male Kana is an exclusive offspring of female Corrin in the game proper (and thus can't support Azura at all).

The files hosting the supports are for all intents and purposes placeholders (and thus have little to no content), meaning that in the case of Azura and female Kana's support chain, a different file is loaded instead for all routes.

Shigure and male Kana have written supports with each other as siblings, which go unused as only female Kana can be Shigure's sibling in the final release.

Beruka and Selkie have written supports with each other as mother and daughter respectively, in spite of this being impossible in the final release as Beruka lacks a support chain with Kaden (Selkie's father) to begin with.

Corrin's dragon form has animations in the game's code for when it performs ranged attacks, even though they can only only deal damage to adjacent units while in their dragon form in the final release.

Leftover in the English version of the game are many unused voice clips. Most of them are just grunting, laughing, or moaning, and some of them are very similar to clips used in-game. Others seem to be, surprisingly, leftovers from an English version of the face-touching minigame! It appears the minigame was fully translated before the decision was made to remove it, as characters have anywhere between one and four unused lines. Note that Kana and Rhajat are the only "child" characters with unused lines.

In the English version of the game, Male Kana has unused lines of him calling Leo's, Elise's, Takumi's, and Sakura's names. Given that Male Kana doesn't reuse one of the Male Avatar's voice banks in this version, and instead has a unique one, these lines were likely recorded to keep the number of voice lines consistent with Female Kana, who herself reuses one of the Female Avatar's voice banks. (In the Japanese version, both Kanas have reused Avatar voice banks, so there wasn't a need for any extra line recordings there.)

Both male and female Kana have critical hit voice clips in the data which were meant to be specific to the Birthright, Conquest, and Revelation routes, similar to Corrin's case. Despite this, the clips for both Kanas were never properly implemented for unknown reasons.

An unused line for Nichol.

Lissa also has sounds for attacking and fighting which go unused due to being in a non-offensive class for the duration of the Before Awakening DLC. The clips themselves seem to have been ported straight from Awakening.

Despite not being playable at all during the DLC Hidden Truths 1 & 2 missions, Anankos's good side is practically fully voiced; he has voice clips for attacking, dual wielding, victory, etc.

Player unit ID 0x82 contains data for a generic male Villager recruited through the Capture system. As all generic enemy Villagers in the game are Vallites who cannot be captured, this data ends up going unused. The captured Villager functions normally in-game, but is assigned ???'s portrait (??? being the hooded version of Sumeragi appearing in Chapter 5, Birthright Chapter 11 and Revelation Chapter 25) rather than either of the two existing generic Villager portraits. He also has defined personal growth rates:

An unused data block can be found in C008.bin.lz, the Person file for Chapter 8 of the Revelations route. (The Person file controls the stats and skills of enemy and ally units.) This block is labelled as PID_C008_サクラ, with サクラ being Sakura's name in Japanese. The block is located directly under the blocks for Yukimura, Saizo, and Orochi (the three bosses of the map), and gives Sakura much higher stats than the other Shrine Maiden on the map, as well as the accompanying music STRM_BOSS_A3, otherwise known as "You of the Light", the music that plays when a unit battles one of the Hoshidan siblings. This all suggests that Sakura might've been a boss of the map, healing the other three bosses. If one were to insert the block onto the map using the chapter's Dispos file (which controls where units on the map spawn), Sakura would be a fully functional enemy. Sakura does appear on the map in a cutscene, but this instance of Sakura is controlled by a distinctly different block, namely PID_C008_EDイベント用サクラ.

Female Kana and Candace cannot equip the Bath Towel accessory. A glitch in the Japanese release prevented Kana from removing the bath towel, so they "fixed it" in the international release by not allowing her to equip it in the first place. Candace can't equip the bath towel because that would've required making an additional model of it to fit her body type. As she is the only character to use her body type, the designers chose to simply prevent her from equipping the bath towel instead as a way to save time.

Nichol and Candace have empty directories located in among the supports for characters that can only support with Corrin. This, alongside with their critical hit cut-ins, supports the theory that they once had more relevance.

Iago, Hans, and Zola have lines assigned for performing a critical hit/activating a skill, implying they were meant to have critical/skill activation cut-ins at one point. As none of them have critical cut-in portraits, they remain silent whenever they perform a critical hit or activate a skill in-game. It should be noted that the voice clips themselves are not unused, as they are used during story dialogue.