Fire Emblem, more colloquially known as Fire Emblem: The Blazing Blade ("Rekka no Ken" in Japanese) is the seventh game in the series and the first released outside of Japan. The game is a direct prequel to Fire Emblem: The Binding Blade, and takes place twenty years before that game. 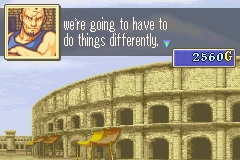 In the game there are buildings called arenas where units can fight and gain experience. Within the game there is unused text and other data that appears to have at one point triggered a more difficult set of arena enemies by granting them additional levels, similar to Hector Hard Mode; the text suggests this mode would have been triggered if a particular unit fights and wins in the arena excessively. This was presumably intended to prevent the player from over-leveling their characters. The mode and associated unused text is also present, and also unused, in Fire Emblem: The Sacred Stones.

The mode is triggered if bits 0x8 and either 0x2 or 0x4 (or both) of byte 0xE of RAM character data are set. These values are not set in normal gameplay, rendering this feature of the arena impossible to trigger. If forced to occur, the arena starts matching that particular unit with more difficult battles and displays the unused text upon that unit entering the arena.

Also of note is that the text has slight display errors when scrolling, cementing this feature as unused as the text formatting was not corrected.

Erik and Nergal both have battle palettes intended for them that go unused to various degrees. Erik's palette data is correctly assigned to his unit ID, and to the correct promotion tier, but the palette he's clearly intended to have is only set to be used when he's part of the Player faction. His enemy faction palette, which is what the player actually sees in-game, is different, and gives him an incorrect hair color. In Nergal's case, the developers just mistakenly set his battle palette to be used only while in unpromoted classes, seemingly forgetting that Dark Druid is regarded by the code as a promoted class. Oops.

Normally, ballistas can only be used in the overworld and do not display an attack animation. However, when hacked into the inventory, there exists full animations for the weapon.

These were leftovers from the previous game on the GBA.

There are what appear to be graphics for a cutscene animation involving Ninian facing upwards while raising her arms. The most obvious place this would have been intended to be used would be the cutscene in the final chapter where she attacks a trio of fire dragons with ice magic, during which she conspicuously just loops her idle animation in the final game.

This graphic is loaded during world map events. It appears to indicate where map sprites will be loaded for cutscenes, though it is never shown in gameplay.

The Transfer Data menu button exists for every language, but Europe never got anything that would make use of it. The European release of the game is still compatible with the US Mario Kart: Double Dash!! Bonus Disc, however.

The Japanese version has alternate intro graphics written in English, like in Thracia 776. Unlike that game, though, the translation here is horrible. The used text in the intro is in regular Japanese.

Eliwood has an unused death quote; its use is unknown, though it is speculated that it was intended for use after Eliwood leaves the Dread Isle.

Several characters who appear only during story cutscenes, or who cannot have their unit information viewed when they appear in gameplay, have unused help descriptions:

Despite the absence of the previous game's Trial Map mode, leftover text referencing it can still be found within the game. It seems that a feature that would allow you to send maps between copies of the game would have been added if it wasn't removed.

All international versions of the game removed the ability to transfer data from The Binding Blade to unlock extras, due to that game not being released outside of Japan. Remnants of this feature still exist, however, including early English titles (the only official version of these to exist, in fact) of every chapter from The Binding Blade (referred to as Sword of Seals here).

There are two sets of strings which are presumably leftovers from removed debug functions, since many of them line up with the functions of the two leaked prototypes. The first set is listed before the Battle History text, and the second set right after. It seems likely that the implementation of the Battle History text overwrote some debug strings.
The first set of strings are:

The second set of strings are:

Nine names intended to be used for important units are unused, found in between the names of used characters in the game.

Several unused classes appear within the game, used as placeholder/dummy classes for certain characters that appear only during cutscenes.

This appears to be leftover from Fuiin no Tsurugi. It was not used by any characters in that game, but the map sprite associated with it did appear in some of the earliest screenshots of the game.

This appears to be a leftover from Fuiin no Tsurugi, where it was used by the character Echidna. It has no battle animations.

The Peer class is used for Eliwood's father Elbert during the ending cutscene for the story chapter "Dragon's Gate". While not technically unused, the Peer class is never actually seen in gameplay, as its only use is to represent characters on the field map. It has no description of its own, only displaying a blank text box, and similar to other non-playable characters, possesses no combat animations, acting as if battle animations were turned off. 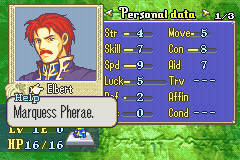 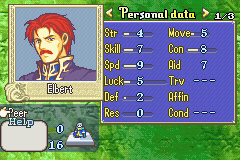 The class "description" for the Peer.

Despite never being used in any active gameplay context, the Peer class does have defined base and maximum stats, although they appear to mostly be placeholders.

The class has an also unused female variant that holds almost identical attributes. It uses the sprite of the "Queen" class. 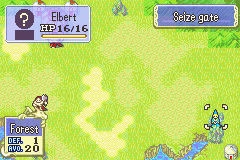 A screenshot of the field sprite for the female Peer.

The character Bramimmond, only appearing in the cutscene separating the two parts of the game's final chapter, has his own exclusive class, using the same name as himself ("Bramimmond"). The class possesses a complete set of combat data, as does the character himself. Its stats are identical to the used Archsage class (used for his companion, Athos, who is playable in the final game), and has the ability to use dark magic and staves. It's possible that Bramimmond was once meant to be playable alongside Athos, though no data exists for his unique tome, Apocalypse. Similar to the Peer class, the class itself has no description, only showing a blank text box, and possesses no combat animations. 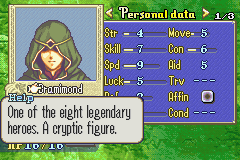 Despite an invisible level bonus only being given to enemies in Hector Hard Mode, all maps in Lyn Mode and chapters exclusive to Eliwood have this data set.
Eliwood chapters are set to give 5 Levels to enemies like chapters present in Hector Mode, but Lyn Mode chapters have a unique setting of granting 3 Levels instead.

The game is supposed to change which table for rankings data it is supposed to use depending on the mode played. This check is programmed incorrectly, however, and thus only the data for Eliwood Mode is used in practice.
This renders every setting for Hector Mode unused. There exists unused data for every Post-Lyn Mode chapter in the game, except chapters exclusive to Eliwood Mode (as exclusive chapters have their tables for the other Mode nulled out).

Despite the chapter being exlusive to Eliwood Mode, the music that is set to play in Hector Mode is partially different. ("Friendship and Adventure" for Player Phase and Other Phase)

Before entering this chapter, the game checks the levels of two sets of characters to determine which version to send the player to. A greater than or equal to total of levels among the physical units versus the magical units sends the player Kenneth's version of the map, otherwise the player is sent to Jerme's version.

Curiously, the game checks the level of Renault as part of the group of magic-using units. Renault is not actually recruited into the party until nearly the very end of the game and it is impossible for him to be present in the party at all during this point of the game. This may imply that Renault was planned to join the player sooner at some point during development. Renault does make a minor appearance in Chapter 18x(Eliwood)/19x(Hector) to give the player an item before this check occurs, but he does not join the party.

The full list of characters checked are as follows:

Right below the used layout for enemy units in the ROM (Offset 0xCD4DB4 in the US-version/0xD9D8A0 in the JP-version/Unknown in EU-version), there exists an unused layout that contains more and stronger enemies than the used layout. It is not set to spawn in either mode in any version of the game, but will spawn without issue if modified to appear. Notably, Crazed Beast is the only chapter where the enemy layout is identical between Hector Normal Mode and Hector Hard Mode. It's possible that the unused layout was meant to be used in the Hector Hard Mode version of the map.

Despite the chapter being exlusive to Eliwood Mode, the music that is set to play in Hector Mode is diffrent.("Friendship and Adventure" for Player Phase and "Nabata's Wandering Messenger" for Enemy Phase)
There also exists an unused layout for enemy units that is set to be used in Hector Normal Mode, but it is empty and doesn't actually contain any enemies.

There is a misplaced escape coordinate for enemy thieves at (0, 6), it is located within a wall, so it cannot be used.

There is a set of tile changes for a door in the upper left. There was a door there in the prototypes; it was the location of the secret shop, which was moved elsewhere on the map for the final release.

There are several unused tile changes that would add bridges crossing the river surrounding the boss of the map, Limstella. There is no known way to trigger these to appear in the final game or in any of the prototypes.

Note that each individual bridge is its own change, so it would have been possible for them to appear individually, instead of just all at once.

Both parts of the final chapter of the game have data for contents of chests on the map. These are inaccessible both because their coordinates are not used on a chest tile, which is required to make them function, and because they're placed in areas that cannot be accessed by the player.

The presence of this data may suggest that these two maps were different earlier in development; there are no chests whatsoever on these maps in the final game or in any of the known prototypes. 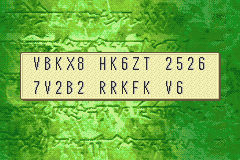 In the "Battle History" in the "Extras" menu, hold Select for a few moments. After a little while, a screen with a password will pop up. How the password is generated is unknown, but save states show that the password includes a clocktick-based RNG, which differs from how the game normally handles RNG. Aside from generating the password, the screen doesn't do anything. The screen cannot be exited, so the game needs to be reset after doing this.

This was apparently for some sort of contest on the game's official Japanese website, though no official materials outside of Japan are known to acknowledge this feature, despite it being accessible in non-Japanese copies. Information on the contest itself is slim.