Mechanically, it reintroduces many features from Fire Emblem Gaiden. It later got a more original sequel for the PlayStation 2 that retains its Japan-only status.

A promotional screen showing the game's release date and its original title: Emblem Saga, which was hastily changed late in development to avoid a lawsuit.

Over half the character portraits (roughly 30!) go unused, also due to the name change.

Runan's hair color was changed very last-minute to avoid the incoming lawsuit, though this proved ineffective. Runan's original blue-haired portraits remain in the game in both promoted and unpromoted form. The unused portraits have slightly different posture and clothing as well.

It seems at some point all characters may have been planned to have blinking and talking animations. A good handful of character portraits in the game have unused graphics for blinking animations, though only Miradona blinks in the final game. Julius, interestingly, has frames for mouth movement as well.

In the final game, no one moves their mouth when talking during cutscenes aside from Miradona.

A very, very unrefined map sprite of a human with a sword and cape. It technically seems to have animations, but all the frames are the same, so it doesn't look like it's moving.

Some of the location icons seen in prerelease images for the game still exist unused in the final game. The final game's world map is entirely brown, like a paper map, and is not in color like these icons and the prerelease world map. 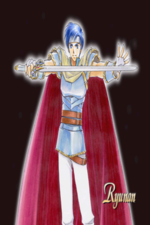 Artwork of an earlier design of Runan, the main protagonist of the game, with blue hair. In the final game, his hair is brown. For whatever reason this art is just hanging around with the skill icons and map sprites. The image labels him as "Ryunan".

Two unused characters named Boyce (ポイス) and Teppster (テップスター).
Judging by their recruitment conversations, they would've been among the soldiers available to recruit from Count Marlon's troops between Chapters 1 and 2.

Of the two, only Teppster has surviving unit data left in the code:

A type of item that teaches a particular skill to a unit once. In the final game, the only books available are Guilty Heart (teaching the Mug skill) and Move Again Book (teaching the Move Again skill), but many more unused books exist, listed below. (Note that the skills themselves are all used in-game.)

These were removed for obvious reasons. According to their description and various pre-release interviews, the army having these would be recognized as an official squadron of their kingdom, allowing for an increase in income each turn. However, all of their functionality was left out in the final.
There is a generic "Emblem" and four other emblems for each one of the royal families: Canaan, Reeve, Salia, and Leda.

What appears to be a version of the opening monologue from much earlier in development. Some names appear to have been swapped around or changed, and some major events occurring in the final go unmentioned.