This page details one or more prototype versions of Tear Ring Saga.

Tear Ring Saga Prelude is a trial edition of Tear Ring Saga that was distributed in Japan as a pre-order incentive. The demo allows a small taste of the game's story and has some preset versus mode teams. It also features graphics of some early designs that differ from the final release. Another demo was also distributed as a supplement in an issue of Dengeki PlayStation magazine.

The Prelude demo is playable up to Map 3. Most of the game is identical to the retail release, with characters having identical stats. Saving is disabled for the demo, which renders the Save Staff unusable. Some weapons have different stats compared to the final release.

The demo opens with the following disclaimer not present in the final release.

The introduction sequence is identical to the final version, though the title screen has additional graphics, adding the Prelude subtitle to the logo and the kanji for trial version (体験版, taikenban) above the title. The extra title screen graphics remain in the final release, but they're unused.

Upon finishing the last map of the demo, a splash screen appears with the game's release date. A similar graphic to this exists in the final, though interestingly, the screen in the final release still uses the older Emblem Saga title.

Some weapons appearing in the demo have different stats than their appearances in the final game.

In addition to the three playable maps, the game has some preset versus teams in the game's two-player versus mode. The final game has no preset teams like this. These demo preset teams are particularly interesting in that they feature characters, with names and portraits, not used in the final game.

The demo doesn't seem to have any new character portraits, though it is missing several recolors of generic villagers that appear in the final. It is also missing alternate expressions for some characters, though these characters don't appear in the demo so it doesn't really matter.

Map sprites for the Dark Dragon (Gerxel's class), the Naga Dragon (Miradona's class), and the Mist Dragon (Muse's class) reflect earlier designs. At some point in development, after the demo was released, the designs appear to have been recolored and switched around. This does explain an oddity in the final release where the classes portraits for these dragons reflect the older designs.

Cutscene graphics for Gerxel also reflect his earlier design in the demo.

Judging by the map sprites and class artwork, this would have been a mounted class that used lances and axes, and could dismount from its horse. 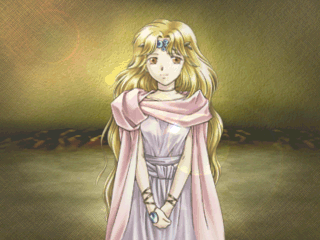 A picture of Miradona exists within the demo that does not exist in the final. This picture may have been planned to be used for the game's ending sequence in an earlier version. The final game gives her an animated portrait instead of using a still picture like this.

A fair amount of the playable character has a different palette for their map sprites than in the final.

Many of the unused map sprites in the demo appear to be work in progress versions, some with different animations and some with less refined shading.

A class icon not appearing in the final game.