According to some rom kiddy, Fire Emblem Gaiden is the second Fire Emblem game. While Hardin's marriage falls apart across the sea, Alm doesn't really care because he's more interested in crushing dastards with no particular relation to mole dragons. Meanwhile, Celica goes sailing across the seven seas before crossing the desert and some swamps. Eventually, the remake got an English version.

This game features things such as "walking around dungeons" and "talking to people", which weren't to be seen again for a few decades.

Gaiden has no shortage of characters that go unused. These unused characters are at varying levels of completion.

The character found at ID 18 is the most complete of this vast assortment of unused characters. Though his name (フォルス) is an identical copy of Forsyth's and his portrait is simply Alm's, the rest of his data is unique and not used by any other character. He would have joined the army as a level 5 Paladin, carrying no special equipment.

Adjacent to the used (クレーベ) Clive is this duplicate of him at ID 0B. This duplicate is almost completely identical to the original.

In identical fashion to the used Clive, he joins as a level 6 Cavalier wielding a Steel Lance. The only discrepancy that can be found is in their resistance stats: this clone has absolutely zero Resistance, while the used version has a single point of it.

There are several unused enemies present within the code of Gaiden. Due to how enemy data works, it is unlikely that any data remains for these enemies outside of their names and occasionally their portraits. Non-generic units appear to be associated with their map: investigation into this is not complete, but it is highly unlikely that any of these unused units has surviving class or level data.

Due to the way class data works in Gaiden, there are no unused classes with any amount of data remaining. The majority of enemy IDs beyond B0 are dedicated to the class labels used by generic enemies, and unused entries here were presumably at some point intended to represent some form of class. 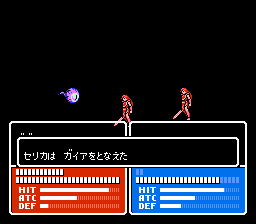 The only functional unused item is the Gaia spell. The term Gaia has a history of being unused within Fire Emblem games: Medeus, the final boss of Ankoku Ryu, was originally named Gaia earlier in development, and the final game has an unused character slot using that name. Even as late as Shin Monshou, Dark Breath's file names refer to it as "Gaiabreath".

The spell name is located at 0x3DE56.

Outside of having 100% accuracy, the rest of Gaia's stats are all zeroes. If hacked in as an item, it can be used by priestesses. Its icon is a bow, like all magic spells that are hacked in as items. When cast, a copy of the caster will move towards the enemy.

No other functional items are present, but there are some name strings with no accompanying data.

Neither of these items appear in any other Fire Emblem game. Their name strings are located amongst enemy spells, so it is most likely that that was their original purpose before getting cut.

Gaiden has two unused character portraits. The first, ID 1E, is an edit of a generic boss portrait, though this particular version of it never gets used.

The second, ID 33, is more interesting. It is an edit of Zeke's portrait that cuts his hair back. Zeke's portrait is a slightly edited version of Camus's portrait from Ankoku Ryu; this is because they are one and the same person. It is possible that earlier in development Zeke's design would've been slightly altered so that even though he would still recognizably be Camus, he would not be completely identical. In any case, the final release opted for a much more conservative edit of his Ankoku Ryu portrait.

The (さばくのほこら) Desert Shrine is a fully unused dungeon. The video demonstrates the player exploring the dungeon.

To access the dungeon, go to the world map and attempt to move to a location. When selecting where to go, edit RAM 0x74B5 or 0x74B6 to 0x3E to replace the first or second available destinations with the Desert Shrine. The dungeon layout itself is the same as the Liberation Headquarters, featuring a hallway, an encounter, a hallway with some graves, and finally the Mila shrine. The encounter is not used anywhere else, featuring a battle against a single Fiend. The shrine's lion heads provide three HP or Luck bonuses to be distributed at the player's discretion. This combination of stat bonuses is not found anywhere else. When leaving the dungeon, the player will be placed outside of Mila's Temple.

In addition to the Desert Temple, there is unused entrance data for the Fort and Duma's Gate, which cannot be entered in the final release. Wherever they originally lead to no longer exists: both drop the player into the Lost Woods. While Duma's Gate is located near the Lost Woods and an entrance to it makes sense, the Fort, a location late on Alm's route, transporting the player to a dungeon on Celica's route is unlikely to have been the original intention before the entrance's removal.

(ドーマのさいだん) Duma's Altar, the final dungeon of the game, has its own location name like all other locations. Its name string is at the very end of the area names. While the location is named in dialogue, it does not appear on the world map at any point, only being accessed through Rigel Castle. As a result, its name string goes unused and no pointer to it remains. 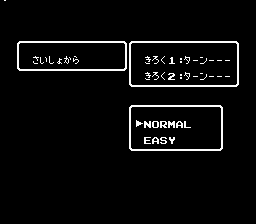 On the title menu, set cursor to the "さいしょから" ("New Game") option, hold Select + Start and then press A on Controller 1. When selecting a save slot, a new additional menu with a difficulty select will appear. "NORMAL" and "EASY" are the available options.

Easy mode doubles experience gain for all player units and allows unlimited trading between Alm's and Celica's groups. On Normal mode, there are a limited amount of times items can be sent across groups. Enemy attributes and layouts are unchanged, making this mode comparable to Thracia 776's Paragon Mode, which is also unlocked in a similar manner and also granted doubled experience gain to all units. 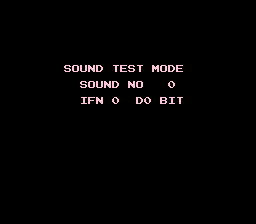 This game contains exactly the same sound test mode as its predecessor, although the method to access it is much simpler: at the first game message ("1991") after startup, press Up, Down, Left, Right, Up on Controller 1. This still works in the remake, albeit at the title screen, though the sound test's basic functionality remains unchanged.