Shining Force: The Legacy of Great Intention is a top-down strategy RPG by the developers who would go on to make Golden Sun. It was originally developed as the spiritual successor to Shining in the Darkness, and was revolutionary at the time of its release for utilizing large, colorful screens for battle simulations as well as offering a diverse selection of possible characters for use. The game has been re-released numerous times as part of Sega game collections and for cellphones. It is the direct predecessor to Shining Force II. A remake titled Shining Force: Resurrection of the Dark Dragon was released for the Game Boy Advance.

Several debugging options were dummied out of the North American release of the game. They can be enabled by way of a patch. Once patched, accessing the Battle Test and Chapter Select menus is done by holding specific buttons when the screen fades out after Simone stops speaking upon starting a new game or loading a pre-existing one. 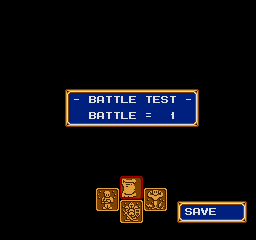 The Battle Test is loaded by holding the A button. The Left and Right buttons on the D-Pad scroll through the numbers 1~30. Hitting A or C loads the selected stage. The Start button does nothing. Hitting the B button calls the church menu, which is fully functional except the game can never be saved while it is in debug mode. Hitting B again loads Nova's portrait and the headquarters command menu. All the characters in the game are immediately generated and added to the force irrespective of which battle is chosen. All characters except Max are set to their default stats.

Once this mode of play is engaged there is no way out except to reset the console. The battle party defaults to Max, Ken, Luke, Tao, Lowe, Hans, Blue, Adam, Zylo, Musashi, Hanzo, and Yogurt. 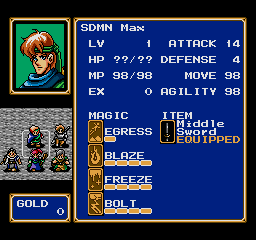 Although Max is level 1 his Agility and Movement are both set at 98, he may move freely through enemy-occupied tiles, he knows the Blaze 1, Freeze 4, and Bolt 4 spells and has 98 magic points to cast them (probably to test spell ranges and area of effect rings). He also has more than 100 hit points and can take quite a beating despite his low defense. Although it doesn't appear in his stats screen Max has a KindanNoHako placed in his third inventory slot each time a battle loads. If the KindanNoHako is sold another will be generated to replace it. This item will appear on the stats screen if Max's second inventory slot is filled and a new battle loads. It functions exactly as described below. 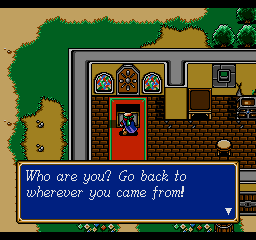 Casting the Egress spell returns Max to what would be considered the last church for that part of the game. Story event flags are not set, however, so it is possible to get into areas where the player isn't supposed to be yet. Event flags related to when characters join the force are set so tasks like getting the Moon Dew for Zylo are already 'complete.' The game's hidden chests are also in a completed state and cannot be found and looted because the game thinks that has already been done. Exiting any map via a warp returns to the root battle selection menu. 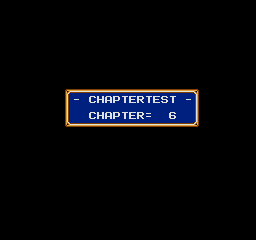 Holding the B button results in this debugging option. The chapter selection menu can warp the player to any of the game's 8 chapters. It generates a full roster and sets character flags as described above in the Battle Test but does not alter Max's stats and there are no sub-menus on the chapter select screen. The game cannot be saved.

Holding the C button will cause the screen to flicker briefly then fade out again as the game's ending sequence loads. It will start with Simone's ending dialogue and play through the entire credits.

The game's sound test is accessible without any sort of hacking, but the method of entry is so obtuse it went undiscovered for well over a decade until hackers began disassembling the game's code. In order to access it, the player must have beaten the game, allowed the ending sequence to completely finish and the game to reset. This sets an event flag in the backup RAM. Once this value is set, the sound test is opened by loading a saved game or starting a new one, and holding the Start and Down buttons while Simone finishes speaking and the screen fades to black. If done correctly, the screen shown in the comparison screenshots above will load. There is no way to exit the sound test without resetting.

The four musicians, who are not NPCs elsewhere in the game, are animated. Due to a developer oversight, the North American release has a pointer that is off by 32 bytes and thus loads the wrong tiles for the window border, but this has no effect on its functionality. Selecting a track to play is done by using the Left and Right buttons on the D-Pad and the C button to play. Pressing B makes a selection fade out and stop. The A and Start buttons do nothing. Values 1~39 are the game's music tracks. Values 65~108 are sound effects. Many of the sound test values are just silence. 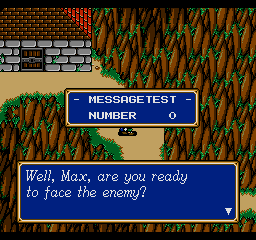 The Message Test can be used by downloading a hacked savestate with the debug menu patch linked above. Left and Right on the D-Pad changes the value by 1 increment. Up and Down changes it by 10. A and C displays the selected message. If the message ends on a new window cursor the player must press B or the text will repeat.

Medical Herb is item 00 and will be displayed as the default for item names, with some exceptions. Max is character 00 and is the default for character names. This can result in otherwise impossible combinations such as Nova's line saying Max needs to be revived. (Max can never be revived in a church as he is the only character to automatically resurrect on defeat.)

Some of the messages have timing code in them and there is a delay in line display or before control returns to the menu. The menu goes up to 2239 but only 2230 are valid. 2231 will outright crash and the remaining 8 values read beyond the game's text banks and spit out gibberish and a long string of nonsense.

Numerous entries are just placeholders and display a lone 0. One unused line is entry 41, part of Simone's opening dialogue:

The Kindan NoHako [sic] (trans.: Forbidden Box) is an item usable by the SDMN, HERO, MAGE, WIZD, HEAL, and VICR classes. Max is programmed with one in the 3rd slot of his starting inventory but it will only be generated if the game is in debug mode or if another item is added to his 2nd starting inventory slot with SF1 Editor.

It raises the levels of everyone in the battle party to level 19 when used. If any player characters are already level 19 the game cannot complete this process and will hang. It can be sold at any shop for 48,000 coins and bought back in the deals section of any item shop for 65,000 coins although when the shopkeeper quotes the price in the North American version of the game an error causes the price to be listed as a ludicrously high number. A similar item existed in the game's predecessor, Shining in the Darkness, but in that game the KindanNoHako would randomly cast spells when used in battle and could be obtained through normal play.

The game's single unused spell is simply called "dummy". It costs 20 MP to cast but none of the spell's four levels have any effect. Its icon is that of Egress from Shining in the Darkness.