Camelot takes a break from making Mario Tennis games and creates their own RPG series.

Golden Sun contains a debug mode that can be enabled by changing the value at 3001F54 to 01. This enables several hidden features: 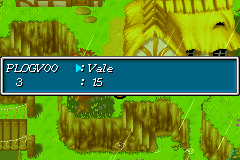 Press B + Start to open the warp menu, which allows you to warp instantly to any map in the game. Press Up and Down on the D-Pad to switch between selecting the map or the destination point, and Left and Right to increment/decrement the currently-selected one. The menu displays the selected map's name, internal codename, and number. Pressing A warps you to the currently-selected map and destination point, and B closes the menu.

Press B + Select to open the flag editing menu. In this menu, you can use the D-Pad to select a flag, press A to toggle it between 1 and 0, and R and L to move through the different "pages" of flags. Pressing B closes the menu.

Turn on flag 16D in the Flag menu, go in battle, and during the Attack Sequence (or during fleeing) you can do the following: 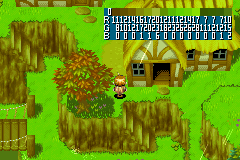 Press L + Start to open the palette editing menu. The menu displays the RGB values of the selected palette. Use the D-Pad to select a value, A and B to increment/decrement it, and R and L to switch palettes. Holding Start makes the currently selected color flash, and pressing Select closes the menu. 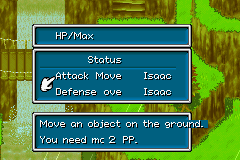 This menu cannot be accessed by the debug mode mentioned above, so you should replace the pause menu by doing 08015374:0801C49D. Most of these text strings don't make sense, but there are two options in this list that you can set. The top one is for setting the Psynergy Shortcut of the L button. The bottom one is for the R button. All psynergies that your characters have are listed, not just the ones used on the field. When this menu is accessed, some basic abilities are given to you, but note that the character must be in your party to see them in the list.

The sequel has a different version of this menu that lists all the field psynergy in the game.

This menu lacks a GUI. The Lost Age has this menu too, as well as a GUI version that this game might lack, so use it as a reference. 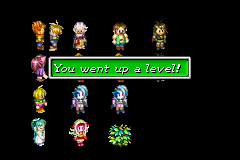 In this Debug Room, you control a full party of Adepts, with them all level 30, except for Isaac, who is level 50.

These are ability range indicators, with columns representing ranges of 1, 3, 5, 7, 9, and 11 targets, which can be used in menus that show Psynergy abilities. The top row is used for abilities with diminishing effectiveness ratios, while the bottom would likely be used for abilities without these ratios. However, the game does not have any means of using the bottom row except in cases where abilities have a set range of "All" targets (for example, Break); the bottom right-most indicator is used in these cases. While the top row is fully implemented, ability ranges 9 and 11 are not assigned to any abilities that appear in these menus so they also go unused.

Each indicator uses two tiles, with the second being mirrored horizontally.

There are a few unused items in this game, obtainable only through GameShark codes or the debug rooms. All of them became proper, fully-coded items in the second game.

Dummied-out character positions for Felix and Sheba are in the first game, though never playable. They are in the sequel, though. There's also a dummied-out character position named "PC07". They can be put in a party by editing the savefile. All of them have zeroed stats for everything and have "NPC" as their class. Felix and PC07 have no small sprite, but Sheba does (although she's looking sideways). Only Felix and Sheba have a portrait in the Status menu; PC07 will show the last portrait seen. During battle, PC07's portrait is visible in the Status menu: it's an otherwise unused Alex portrait. In battle, they all use the Vermin battle sprite and will be unable of fighting even if given positive stats.

Within the ROM lies an earlier version of The Lost Age's title screen music. Besides the instruments (which are slightly different between GS and GS:TLA), it seems the volume for some tracks is different from the final. Both songs are in the same position, since GBA Mus Riper names them both as "song040".

In Link Lobby, there is an NPC who is out of bounds. If you talk to him, you can pick a party setup by number, though you can't see what they are before choosing them. His dialogue has been localised in every language the game is available. His first line of dialogue will have the Karagol ship captain portrait.

If you choose a number which is too high, the NPC will say that the parameter doesn't exist, and that you should ask “Mr. Sugimoto” (the Spanish, Italian, German and French localisations curiously omit this last part). The last message appears when pressing B in the number selection screen.

This portrait of child Felix goes unused, since he has no speaking lines during the prologue. The portrait can be seen in the debug room's portrait viewer, though, as portrait No. 51.

This portrait of Alex goes unused too. It's somewhat different to his actual used portrait. It's absent from the debug portrait viewer and it can only be seen under specific conditions (read the Unused Characters section). Evidence suggests that Alex was planned to be a playable character earlier in development.

Abilities encompass everything a player or enemy can do in battle: from normal attacks, Psynergy, unleashes, unique enemy attacks, and even doing nothing (ability No. 0). Among the 519 abilities programmed in the game, there are 128 dummy slots (named "?"), as well as some repeated abilities. Some of those dummy slots become actual, used abilities in The Lost Age. Other 52 dummy abilities (named "=") are linked to dummy Djinni (discussed below), and some of them become actual programmed abilities linked to the new programmed Djinni in The Lost Age. Dummy abilities and those which are only used by enemies are represented with an "X" icon when hacked into a player's Psynergy list.

Note: Abilities in italics are unused/dummy abilities in GS:TLA. Abilities marked with an asterisk are Djinni summons present in GS that were assigned different slots in GS:TLA to accommodate the new summons.

The game contains 203 slots for character classes, of which 113 are dummy (named "?"). There's a placeholder class named "NPC" (class No. 0), which is only used by the unused characters (discussed above). The final classes from The Lost Age are almost fully coded here too, but they can't be obtained because they need more Djinn than you can acquire, and they don't grant any new Psynergy.

Dummy classes that become functional ones in GS:TLA

Note: In GS, Flame User is class No. 202, the final class in the list. GS:TLA moves it to 200, and then expands the list further to add newer classes.

The game contains 164 slots for enemies. Some of them are multiple instances of a same character (for example, Saturos appears three times, since you battle him that amount of times, and he has different stats each time), 3 are dummy (named "?"), 1 is a placeholder (enemy No. 0, "???"), and 2 are partially programmed enemies with proper sprites (also named "?").

A palette swap of the Toadonpa monster. This palette would be used later for the Devil Frog monster in The Lost Age.

The game contains 80 slots for Djinn, but only 28 are programmed and used in the game. The other 52 are dummy Djinn (named "="), several of which became programmed, usable Djinn in The Lost Age.

Dummy Djinn that change name in GS:TLA, but remain dummy

The English, French, German and Italian versions have the same characters available. This means German, French and Italian players cannot name their party using language-exclusive characters (like ß, ç, etc.).
The Spanish version replaces some symbols in the last row with Spanish accented letters and Ñ. Interestingly, ü is missing (it is used in words like “pingüino” [penguin]), and the uppercase version Ü (though no native Spanish word begins with Ü).
The Japanese version has a “きりかえ” (Switch) option that switches between two modes: hiragana/katakana and latin characters.

For some reason, the Spanish version has a different glyph for the “?” and “!” characters.

The Japanese game had a subtitle, much like the sequel: 黄金の太陽：開かれし封印 (Ōgon no Taiyō: Hirakareshi Fūin; “Golden Sun: The Broken Seal”).
The English version only has “2001” as copyright date, while the European localisations have “2001,2002” 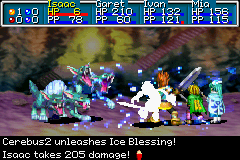 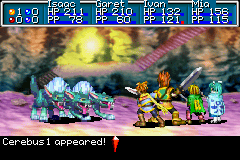 The enemy found in floor 9 of Crossbone Island is incorrectly named "Cerebus" instead of "Cerberus". The sequel corrected the error, although the enemy went unused.