Here are a few screenshots of those menus in respective order:

Turn on flag 16D in the Flag menu, go in battle, and during the Attack Sequence (or during fleeing) you can do the following:

There are a number of menus that can be opened that are not accessible via the debug mode mentioned above, so replace the Pause menu by putting the following values at 0803835C.

There's a function at 0811C538 that allows you to use L/R to rotate the camera in battle.

These are ability range indicators, with columns representing ranges of 1, 3, 5, 7, 9, and 11 targets, which can be used in menus that show Psynergy abilities. The top row is used for abilities with diminishing effectiveness ratios, while the bottom would likely be used for abilities without these ratios. However, the game does not have any means of using the bottom row except in cases where abilities have a set range of "All" targets (for example, Break); the bottom right-most indicator is used in these cases. While the top row is fully implemented, ability ranges 9 and 11 are not assigned to any abilities that appear in these menus so they also go unused.

Each indicator uses two tiles, with the second being mirrored horizontally.

In Link Lobby, there is an NPC who is out of bounds. If you talk to him, you can pick a party setup by number, though you can't see what they are before choosing them.

In both Golden Sun games, there is a pointer table in which every entry corresponds to a battle animation. In the US version of The Lost Age, this table is located at 08197AA0. Every indexed battle animation has an ID, and these IDs (along with arguments) are defined in a table located at 08128C50. Additionally, many animations are coded within shared functions and are only differentiated by conditional ID branches; for example, the animations for Growth and Punji use the same base function, but Growth has an internal ID of x00 while Punji uses x01.

Both games also have an assortment of unused battle animations; most are not indexed. However, many of these animations are accessible through patches made by members of the Golden Sun Hacking Community; the Animation Overhaul (with Baseline) can be found here.

Below are some purposefully-made animations that exist in this game. Please note that all names are unofficial, but are included for quick reference if the patch linked above is used. Unless otherwise stated, all instances of a target being damaged are not part of the animation.

In this game, enemies have three variants of them. However, some enemy groups only have one or two variants used in-game, leaving unused enemies with placeholder stats. In the following table, only enemies with exclusive palettes are shown with a sprite. This does not include enemies from the first Golden Sun game, which are coded in this game, but left unused.

Elder Wood, Estre Wood, and Weird Nypmh can be seen in-game using the in-game Psynergies with their name. However, they still have their own unused enemy page.

In E Tundaria Islet, attempting to walk on the water will cause Felix to go through a drowning animation, followed by the screen briefly turning black and depositing the player back at the entrance to the area. There is no way to access this without cheating as it is impossible to fall off into the water, suggesting that earlier in development it was possible. This was likely dropped for being too hard or simply not fitting within the series' design standards for movement.

Curiously, using Reveal will delay the drowning as long as it remains active. 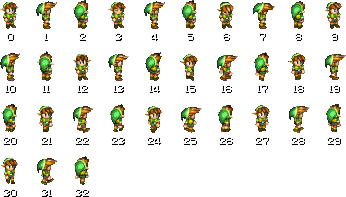 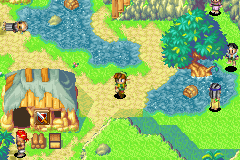 Present in the ROM are sprites of a character that closely resembles Link. The following GameShark/Action Replay code will change Felix's sprites to these:

The Ghost Army enemy points its spear to the right. This left-pointing version is unused.

If the event that sets Felix as the lead character is bypassed through debug warps, Jenna will remain the lead character on the overworld. While she is missing sprites for several basic actions (such as pushing objects and climbing diagonal ropes), she does have several sprites that aren't used. These include complete casting animations for all directions (unused as she doesn't get any Psynergy usable on the field when she is the lead character), injured sprites for the overworld if she is defeated but other party members are still active (unused as she never has allies when she is the lead character, so her defeat causes a party wipe), and sprites for nodding her head while looking in all directions (as she is only asked 2 questions, both in a cutscene where her facing is preset, most of these are unused).

Part of the above unused behavior in the E Tundaria Islet map. Felix has a large number of frames for use while drowning that go unused.

The following sprites exist completely animated in the game, but no enemy in the roster uses them. Note that the small scorpion is different from the regular scorpion enemies (which are larger).

This NPC exists in the game data with a sprite sheet and a portrait. According to the debug room, it might be a seller or an innkeeper.

Normally the player first meets Piers in Madra, where a mandatory cutscene with him takes place. Using hacks or a warp glitch to skip this cutscene, however, shows that Piers has separate dialogue for first meeting the party in Kibombo instead, fully implemented in-game. It differs from the dialogue players normally get at this point; the characters usually discuss their encounter in Madra, whereas the unused conversation here mentions the group's search for a boat.

Piers: "Wh-Who are you?!? What... What are your intentions?"
Sheba: "He seems to believe we are enemies..."
Jenna: "I hope he doesn't think we're with the Kibombo."
Piers: "I must admit, you don't look much like Kibombo... But that begs the question, if you're not Kibombo, then who are you, and why have you come here?"
Kraden: "They are...warriors. But how did you get in here?"
Piers: "Why are these warriors in a place like this?"
Sheba: "I'm not sure how to answer that..."
Jenna: "Actually, we've been looking for a boat... We kinda need one."
Piers: "You're looking for a boat... in the middle of the continent? That seems like a bad idea."
Sheba: "Hey, this wasn't exactly our first choice, you know?"
Jenna: "A tidal wave destroyed all the boats in the coastal towns."
Piers: "You're asking me to believe rather a lot, don't you think?"

(Source: The Adepts of Weyard)

There are a few points where the player does not have access to the Mind Read Psynergy due to the party splitting up. Two of these areas have NPCs with Mind Read dialogue implemented in-game, but they are impossible to see under normal circumstances.

When the player reaches the lighthouse aerie to cast the Jupiter Star into the beacon, Karst and Agatio have Mind Read entries, but the player cannot view them without hacking.

Karst: Once Jupiter is lit, we'll have no need for you. Just watch...
Agatio: Do even think about resisting us... (sic) We have our own ideas about that. Once the beacon is lit, your usefulness will have run out for good.

It's strange that they would have these thoughts given that it's established that Adepts can sense when other Adepts use Mind Read, with Karst specifically responding with scorn when the player attempts a Mind Read on her at an earlier point in the game. This may have lead to the decision to leave them in such a state.

After the events of Mars Lighthouse at the end of the game, the player is returned to Prox with only Felix and Isaac in the party. Even though the player does not have access to Mind Read at this point, all of the townsfolk have Mind Read entires implemented.

(Source: The Adepts of Weyard)

There are a number of battle animations that go unused. Some are indexed in an animation table, but many are not. Most of these animations also exist in GS1, and are likewise unused.

The first game's bosses, young Issac, young Garet, all out-of-battle sprites for all party members (including Jenna, which are stored separately from her new sprites), the ship used to cross the Karagol sea, various NPCs (but not their portraits), and some world map locations all have their sprites leftover in this game's code.

Additionally, all enemies from the first game are in the second, as are all battle backgrounds, weather effects (like the dust particle effect for when Sol Sanctum is collapsing), and some text.

Since the game's title is localised, title screens are different. The non-English international versions have a different font/style for “TM”, and use different colours and positions for the logo.

The Japanese version's opening says "THE LORD OF GOLDEN SUN THE 2ND BOOK". This is changed to "Golden Sun Book Two" in the English release, correcting the Engrish and use of all caps. All European versions of the game have the intro in the local language and retain the English version's use of proper capitalization and use of word over numeral, except the Italian version which uses the Roman numeral "II".

If you hold Up soon after leaving Daila, flag 0x175 turns on. This causes alternate music to play for the tutorial music. 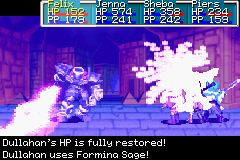 One of Dullahan's signature abilities is named “ファルミナスエッジ” in Japanese, which translates as “Fulminous Edge”. However, it was localised as “Formina Sage” in the English version. The error then was mirrored in the other European localisations. It was corrected in Golden Sun: Dark Dawn. 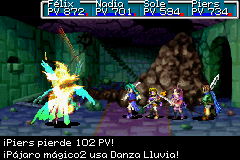 In the Spanish localisation, ability “Regen Dance” was mistranslated as “Danza Lluvia” (Rain dance) because the team thought “Regen” was the German word for “rain”.

In the English localisation, ability ウルフラッシュ was mistranslated. It is some sort of portmanteau of ウルフ (wolf), スラッシュ (slash) and フラッシュ (flash), but it was literally romanised as “Ur Flash”. The error was mirrored in other European localisations.

In the English localisation, ability きゅうしょづき was mistranslated. It means “Vital thrust”, but づき was interpreted as Japanese word 月 (moon) instead of 突き (thrust), so the English version ended up as “Vital Moon”. The European localisations followed suit.