Golden Sun: Dark Dawn is the unexpected third game in the Golden Sun series, starring the next generation of the heroes.

There are nine 3D models which are not archived with the rest of the used models. Aside from the Djinn Tutorial scene at the forest and two dungeon entrances, there are quite a bit of interesting models out there, including oddly textured ones.

The graphics for the E3 demo used for the sub-screen and the top-screen are still in the ROM. Additionally, maps from the E3 demo made it into the released version.

The E3 demo has a different version of Patcher's Place, with NPCs that say different things from the final game. Included among this area's text files is an inaccessible script for the cutscene that plays when meeting Patcher for the first time. The text file used for the release version of the Patcher's Place map can be replaced with the E3 text file, which can then be adjusted slightly so that it matches up 1:1 with character interactions in the final game.

One can exploit a glitch involving saving then loading while on the border of certain bridges (with Matthew's shadow no longer visible), so that the game "corrects" his position and he clips through the floor. By walking in the black nothingness, otherwise unreachable places in the overworld map can be reached. A similar effect is observed while using double speed/walk through walls Action Replay codes.

This glitch reveals that many of the places from past Golden Sun games have been modeled in fairly extensive detail, such as an unreachable Sol Sanctum and the Venus Lighthouse. Many of these places are inaccessible when approached, though some are. 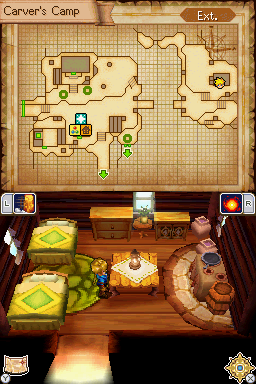 Additionally, using "walk through walls" codes to cross normally broken bridges can lead you to normally inaccessible areas like the normally unreachable other side of Biblin (modeled but lacking collision detection and NPCs), and many other partially implemented towns. The Carvers Camp has on the other side of the bridge a house without collision detection but a functional door (and full interior!). A puzzle involving a pushable log even exists, but the end of the path has nothing. Most importantly, the warp on the other side to the overworld is functional, although you're instantly warped back.

Normally, when you use positive numbers for enemy groups, the table at 0217432C (U Version) is used, however, if you use negative numbers, the table at 02173674 (U version) will be used instead. Note that the sprites will not match with the enemy names, so this table is likely not used in normal game-play. The names should match with the stats, so that's how they are listed below:

The the DS debug button resets the game, much like pressing L + R + Start + Select.

As the game has localised titles, the title screen differs. Also, the USA Spanish version uses the English logo instead of the Spanish one. There are some punctuation differences as well. The English USA and EUR versions have different wording (tap/touch).