Shining Force CD is a re-release of the first two gaiden games combined into one for the Mega/Sega CD console. Then the developers threw on a pair of epilogues as original content and called it a new game. It is a direct sequel to the original Shining Force with a story that leaves the kingdoms seen in that game for new (thoroughly monster infested) shores. 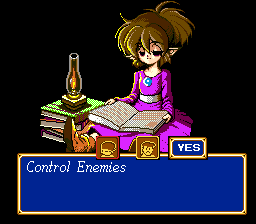 Shining Force CD does not have the same robust debugging options codes that Shining Force II had but there is one code.

In order to use the Control Enemies code, the clear flag for the book the code is to be used in must already be set. Once that is done, reboot the game (or simply allow the game to reboot on its own if you just completed everything). If the RAM cart has not been loaded, make sure to do that before attempting to use this code.

To activate when loading a save file, follow these instructions. Navigate to a file to load from backup RAM. Press and hold the A and START buttons to confirm your file load. Continue to hold until the prompt comes up. Once it comes up, it is safe to release START and A. Selecting yes places all enemies under player control just like the same option does in Shining Force II. Pressing B is the same as selecting No. To activate Control Enemies when starting a new game simply hold the A and START buttons after choosing the difficulty setting. 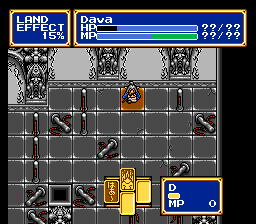 While under player control, enemy units have most of the functionality available for player units. They can move, cast any spells that have been assigned to them, can attack player units, use items on themselves or each other, search to pick up hidden items, drop items, or give items to other enemy units. The equip option is non-functional however and trying to use it, regardless of the unit's inventory, just triggers the "nothing to equip" error message. Special abilities like Dava Beam cannot be used as they technically are not spells but are instead controlled through AI scripting. In the screenshot of Dava in the Museum, her two abilities are Dava Aura (a weak self-targeting Aura spell that costs 0 MP) and Dava Breath (a variation on Demon Breath). In battle however, both are simply called "D" due to a programming error. The proper names according to the ROM are suppose to be "D AURA" and "D BRTH" respectively, but the AURA and BRTH portions were split into different spell slots.

While Control Enemies is active, enemies hidden through spawn triggers may fail to spawn as they would normally.

Present at the very end of AT.BIN:

Because Sega did not release a first-party Mega CD Backup RAM Cart in Europe, data transfer bonuses to later chapters cannot be earned normally in the European version. The official US cartridge and third-party versions are compatible without modification, though, so it's not a total loss.