Also known as Shining Force III: Target: Child of God, this sequel oddly feels like what the original Shining Force III should have been. It stars the 3rd Prince in line to the throne, Medion with his even smaller (and somewhat quirkier) force of soldiers as he tries to evade fellow Empire soldiers, masked satanic cultists, and Republic traitors on his way to rescue his father, the King of Destonia and ultimately stop the Mad Governor Garvin's schemes.

Pressing X+Y+Z together will pause the game. In this mode, pressing any button other than L, R, or Start will advance the game 1 frame, pressing L will enable some printout information and R will disable. To exit, press the Start button. Holding Z will disable collision, allowing you to cross out of bounds. In battle, if you hold Z while an enemy or character ends their turn, the battle instantly ends, or instead you can kill specific characters/enemies by holding Start while ending their turn. Finally, pressing R during a cutscene will skip dialogue, and L will disable it. Pressing it multiple times can advance through scenes slightly faster, though this will crash the game on certain scenes.

If the bit 0128-6 in Flg is set, you will now be given control of enemies during battle.

Setting 0128-0 in Flg will enable a fight menu, with extra options, they are as follows: 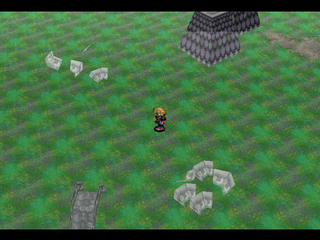 Behind Airo Village is a functional bridge and a few textures and sprites. 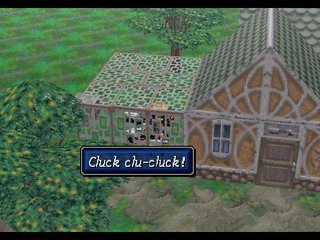 Inside this pen is chickens that can't normally be talked to. 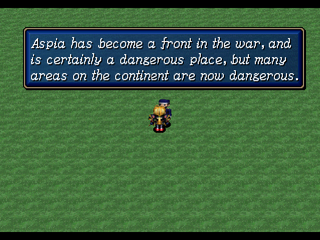 Placed way out of bounds is this lone Conductor.

If for whatever reason the game cannot load the normal waterfall(For example, by using an certain version of Yaiba Sanshiro), this gets loaded instead.

Immediately after the last used character are three unfinished entires. They are called "グラツア"(Gracia), "パピィ"(Puppy?), and "スピリテット"(appears to be a misspelling of Spiriel, スピリテッド vs スピリテット), They all use the standard placeholder icon, and have no stats.

Strangely, and only for this game the character Julian has two entries in stored in RAM with the new one occupying a slot that later gets filled by Gracia in Scenario 3. The original, however, is left broken, setting it to either team will crash any battle it appears in, and setting it to Medion's team out of battle will corrupt the status menu, creating multiple garbage Playable Characters.

In addition to the 6 3rd promotional classes from Scenario 1 (The Summoner Hedva uses is a different entry.), another 6 base level promotions go completely unused. It's not known at all what the first three could've been used for, though they oddly sound as if they could fit the characters Ratchet, Frank, and Hagane/Murasame respectively (though it's just as likely these were also intended for cut characters). The other half however also fit well with the characters Robbie, Jade and Pappets, who all join in the later half of the game.

Even stranger, all six of these are removed in Scenario 3, leaving very conspicuous "Reserve" gaps.

Buried in the game are a slew of unused enemy entries all of which still have model files present, though most had their contents dummied out. An unusual amount of these are from previous Shining Force games. They follow X8PC[###].BIN (### being the values below) Note:Number is for the Model IDs. To get the Sprite IDs, subtract 500 from the Model ID (For example: Sara Sldr's Sprite set is 201)

Using the in-game debug, it is possible to place any item in the game in your character's inventory. The Ninja Katanas are actually used now, and NOT SET was removed as all 255 slots in the game now contain items, but unused items from the first game are still present.

All of the spells from the first game return for this one. Most are just as unused but not altogether unchanged, as some now appear to have more functionality. For English names and descriptions, the fan translation will be be used for parity, though keep in mind the translation for these may not always be accurate. To view these spells, write the following values to address 0x6034094. This will replace Medion's Return spell with the target. For the spell's level, write 01-04 to address 0x6034095, and if more MP is needed, add/use the bright honey consumable through the Debug menu.

Each item in the game, and certain enemy attacks are considered Spells internally, though it appears they were disabled. Attempting to load the ID in as a spell results it being set to 00(???/?????), though the descriptions for these can still be seen through the Status Menu, under Magic. It is possible *Orb was also intended to be disabled, though the unique description suggests otherwise.

To access these levels use Action Replay code 360302E1 00XX (XX being the following values):

The character Produn had their portrait updated between versions.

A glitch was fixed involving certain uncontrollable NPCs, such as Hazuki(before being recruited) and Donhort. If the game difficulty was set to Insane and it reaches their turn, the game crashes.