The game also checks for 29.scr, which appears to have enabled additional debug controls that 10.scr doesn't have coded in. These features include the teleport screen, the room info box, and instantly moving around the screen. 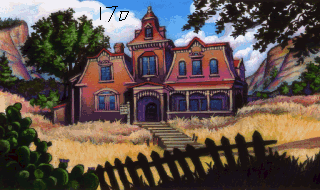 Pic 170 contains this lovely house with the number 170 floating above it. Had it been used, it would have been for the closing screen. A similar scene can be seen in Pic 245, except with 245 written instead of 170.

View 989 contains the ending sprites from Laura Bow in the Dagger of Amon Ra. However, the palette is that of this game, thus making the graphics look incorrect.

Rough sketches of the cloth and the guns.

Freddy with his silver ear shot off. This view is never seen, since the script corresponding to this view was never created.

Very bare versions of the chapter cards can be seen in Views 144 to 147. It seems like these would be overlaid on the screen, rather than as unique views with nothing in the background.