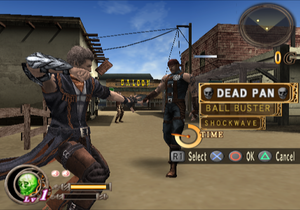 When the game was released outside Japan, the God Reel was renamed God Roulette. Also, a technique from the Roulette/Reel was left out, called "Pan Drop" in the Japanese release. In it, a pan suddenly materializes in the air and drops on Gene's head. It was available from the beginning, cost no orbs to use and did a small amount of damage to the player in exchange for 3 seconds of invulnerability. It was not removed before appearing in a pre-release English version at E3 2006 though, where it had been translated as "Dead Pan". The final NTSC U/C and PAL releases also still have the technique, fully functional, but only accessible by using patch codes. Codes in raw format that will enable it in both (name shows in Japanese when using any other language than English in PAL version):

In the Japanese version, there was an item called Chihuahua Curry available from the shop. This was changed to Puppy Pizza for releases outside Japan. The items are functionally identical.

A sign in stage 1-3 that read "Cowboy Bar RORD'S PUB" was changed to read "Beating A Dead Horse Pub" instead.

The Head Slicer move does not allow you to decapitate enemies.

In the Japanese version, the slot machine in the room in the casino that can only be entered with 100000G allows the player to stop each of the three slots individually. It also has different prizes. In addition, there is a NPC standing next to it that is not there in the other versions.