This is a sub-page of Grand Theft Auto: San Andreas.

There are a lot of unused characters in San Andreas, ranging from "average" civilians to entire branches of law enforcement that had been truncated for one reason or another.

Civilians that would have shown up on the streets of San Andreas at one point, but ultimately never made it.

An unused security guard. His lack of inclusion seems to entirely be due to a developer oversight, as he has many voicelines and is even in peds.ide, but is listed nowhere in pedgrp.dat, meaning he can't spawn anywhere. As it stands, without modding the game, he will only show up very rarely in the Vigilante side-mission since said mission picks peds from peds.ide at random.

In the SPC_GA file, there is a voice bank for what appears to be a very stereotypical Indian man, even featuring constant references to curry and his turban. While any references to him have been wiped from the game besides this voice bank's name, it should be noted that roughly half of these quotes were inherited by OMOST.

Also in SPC_GA are voice banks for two Iranian characters, a male and a female. This is all that's left of them, however.

A strange pedestrian who almost looks like a Chinese Claude Speed. Almost.

Their filename likely refers to them being a mediator of some kind, but for what is entirely unknown.

A very strange ped in a green outfit with no voice lines or any indication of where he would be in the game. Judging from the name, though, they wouldn't have been of a sound mind.

Two complete airport workers with over 100 lines of dialogue each. They would have been the airport workers present in San Fierro and Las Venturas airports respectively, but the final game only uses BMYAP for all airports. It's unknown why they weren't included. 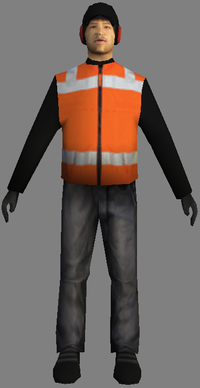 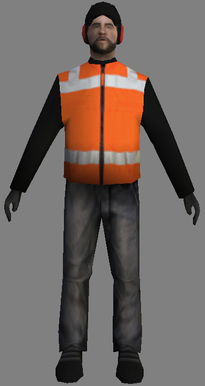 A hispanic girl who looks exactly like HFYST, but wearing all pink instead of all sky blue. Based on the file name, she would have spawned in Las Venturas, possibly acting as that area's "version" of HFYST. 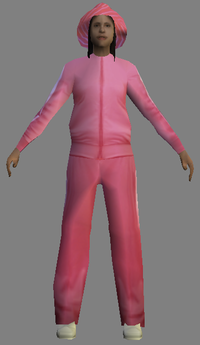 A female valet. She is extremely low poly, indicating that she was cut early into development. 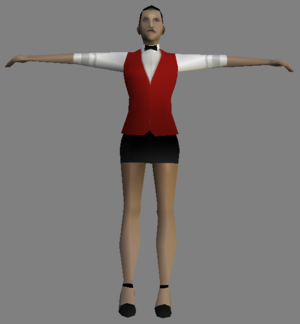 A unused pool player, who appears to be a reskin of CSDOPE 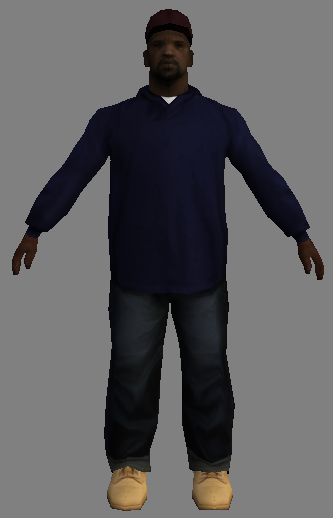 An unused (and hairy) cab driver wearing a Hawaiian shirt. He even has voice lines, so he was either cut late in development or simply not implemented properly.

A cut skater ped, who would have most likely been riding or at least holding the unimplemented skateboard. All that is left of them are some voice lines.

Two extremely Texan men who are near identical to each other minus their shirt color and facial hair.

Oddly, their models are completely absent from the gta3.img file (where all non-cutscene characters are stored), but their voice lines and cutscene models, CSTEXAN and CSTEXAN2, are still in-tact. They were fully developed as well it seems, each one having over 200 unique voice lines. It's unknown what mission/cutscene they would have been a part of or why they were cut in general. 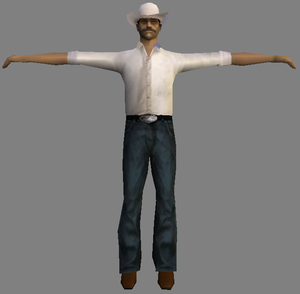 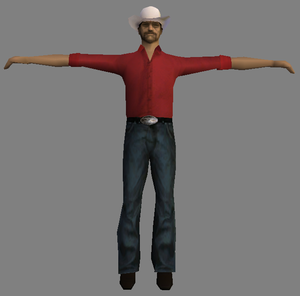 Various gang members (and even entire gangs) that never got to bang.

All of these names equal one character who was a GSF homie at one point. BLUEBR/BLUEBL only have the textures left, while the identical CSBLUE2 has a model as well, and actually does show up in the game, in the intro cutscene for the mission Customs Fast Track. He also heavily resembles BALLAS1 (the Balla wearing a white shirt known for talking about his height). 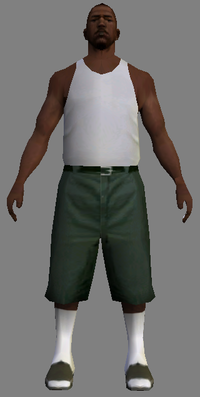 Similar situation to the above, except this guy looks almost identical to FAM1, albeit wearing a hoodie. Oddly, the colors for CSBLUE3 are slightly more...well, blue than the other textures. 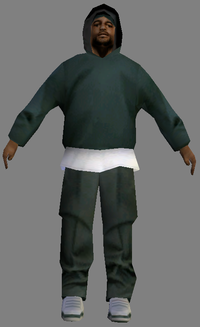 This appears to be a completely unused Triad member, only having a cutscene model/texture left. 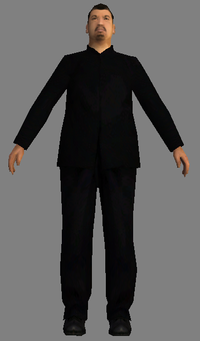 This Triad features the same name as TRIBOSS, but looks completely different, being much older, sporting white facial hair and no hair on top of his head, and wearing a blue trench coat with a red tie. Whether he was another character or just a drastically different design is unknown. 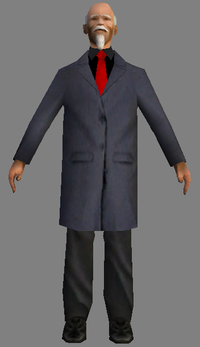 The game has 10 gangs in total according to pedgrp.dat, 3 of which are almost entirely unused, the Italian Mafia (Gang 6 in the file) and 2 unused gangs simply called Gang 9 and Gang 10. The Italian Mafia do appear in the game to some degree without cheats/mods, seen as enemies in a few Las Venturas missions. Gang 9 and 10 at this point are nothing more than placeholder gangs, as they share models with the Aztecas, behave like the Rifa, and drive Sentinels like the Mafia do...or would have, if they had turf.

What Gang 9 and 10 would have been in the final game isn't fully known, but there's evidence to support the Russian Mafia being a gang at some point. Like the Italian Mafia, they do still appear in the game in a small handful of missions throughout the game. Additionally, in the peds.ide file, the models they use (MAFFA and MAFFB) show up under a "#gang peds" section, along with an unused third member, MAFBOSS. Oddly, the Rifa don't appear in the "#gang peds" list, appearing in slots 173-175 instead, but are still recognized by the game/files as being GANG4. On top of this, the Russians are still seen as part of the CRIMINAL pedestrian type according to the list below. 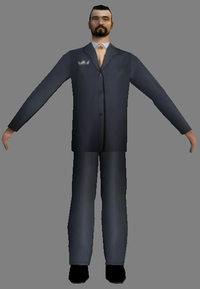 Cops from all around San Andreas that had to turn in their badges.

An unused country police officer, specifically a deputy. They would have likely spawned in the countrysides. 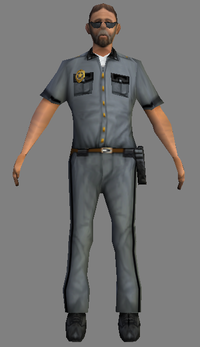 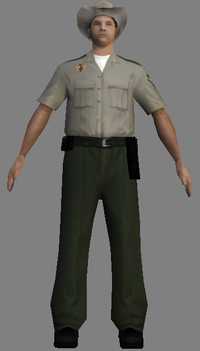 The bike cop, LAPDM1, has 3 unused skins (and that's just ones that are actually still in the game)!

CHOPCOPX is identical to the in-game bike cop skin, but features a lighter color palette, lack of a five-o-clock shadow, and a blue and white helmet. CHOPCOPX is technically used in-game...but only due to an oversight. 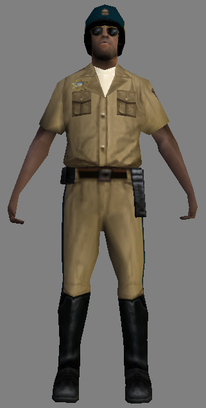 Characters that were tied to a cutscene or mission, but didn't make it, either due to being replaced with a more generic model or having their appearance cut entirely.

Note that this doesn't include models that happen to be earlier designs of characters, see below for things like that.

A very wide black prostitute (I mean wide!). It's unknown where she would have been, or if she's even an earlier design of a prostitute in the final game. 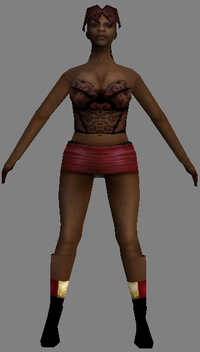 An unused C.R.A.S.H. officer with a face only a mother could love. It's unknown what purpose he might have served, but it's been speculated that he's an earlier design for Pulaski on account of the file name and the mild resemblance to him in general.

An older looking white prostitute with a cig in her mouth. It's unknown in what cutscene she would have appeared in. 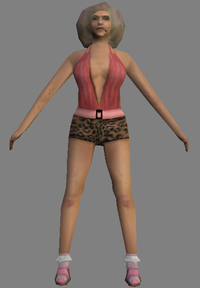 A voice bank in SPC_GA features a mere 5 quotes for a very aggressive old woman. Based on the name and the nature of the quotes, this may have been Colonel Fuhrberger's wife (the PJ stands for Pajamas, which is also present in Fuhrberger's model name).

A lower poly version of WMYPLT with an odd name.

An earlier version of WMYBP, a backpacker known for being tied to the Epsilon Cult. The palette and face are completely different, and he also wore a white long-sleeve shirt under his t-shirt. 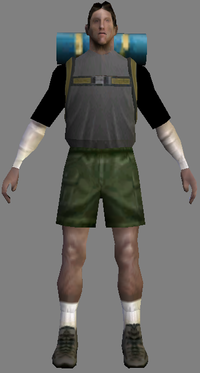 An alternate design for the BMYDJ pedestrian, the only real differences being lower detail overall and more pronounced white brims on his hat and pants...which has one sleeve rolled up.

While not technically unused, being seen in the background of a cutscene in the mission House Party, he's not on-screen for long and only his top half is ever seen. 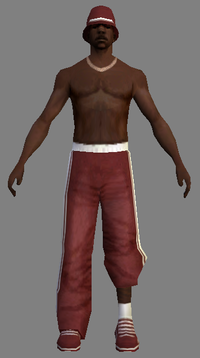 An earlier design for OMOST...though you can barely tell as he looks completely different in pretty much every way.

This is an early model for BFYST, before she was given Kendl's early model. Another thing to note is this model uses an early texturing scheme, and the face looks rather cartoon-ish as a result. 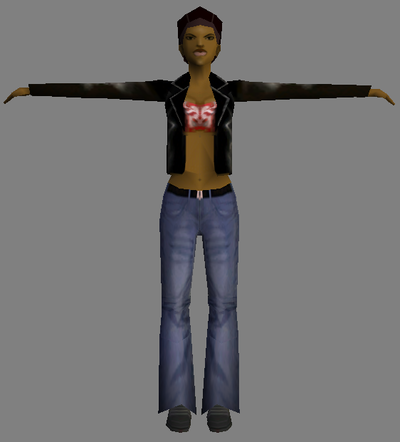 Retrieved from "https://tcrf.net/index.php?title=Grand_Theft_Auto:_San_Andreas/Unused_Characters&oldid=1107938"
Categories:
Cleanup > To do
Subpages