Of course, one particular piece of unused content gained notoriety, leading to a massive (and also pretty dumb) controversy and a temporary Adults Only rating by the ESRB (which, to put it simply, would have been very very bad for its sales had it been permanent). 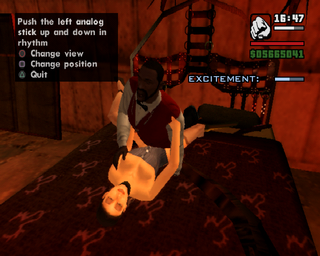 In the dating sequences of the game, you normally conclude proceedings by choosing to leave your girlfriend at her home or entering her house for "coffee," which is depicted with a tasteful fade to black along with the sounds of intense "coffee" making. However, the development team had originally implemented a mini-game which allowed you to control what happened inside, ultimately cut from the finished product.

In the final version of San Andreas, this mini-game was disabled with a simple flag instead of being scrapped from the game data outright. The mini-game was not declared to the ESRB, since it's effectively cut content and there is no way for a player to experience it through the normal course of gameplay.

Once San Andreas was released and curious modders started to delve into the game files, the coffee started dripping. Animations, models, textures, sound files, and even the code for the sequence were discovered. It wasn't long before the flag to switch the feature back on was found as well, leading to the Hot Coffee mod - at which point the coffee truly hit the fan, and the rest is history.

You can use this little tool to patch your save game on any platform to switch the flag and thus enable this functionality. 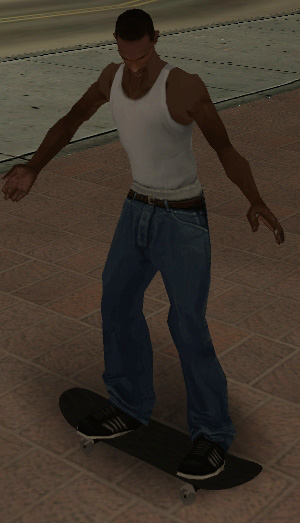 How it would have looked, via a PC mod

Within the game files are textures, a model, a HUD icon, and related text for a skateboard item that would have acted as a combination weapon and vehicle. This feature was dropped during development, but eventually made its way into Rockstar's later Bully.

The following text from the AMERICAN.GXT file describes how it would have been used. From the naming convention of these text strings, it can be assumed that the item would first appear instead of the bicycle when leaving Madd Dogg's mansion towards the end of the mission Madd Dogg's Rhymes.

There are no animations or supported functionality to re-enable the skateboard as a true weapon and vehicle combination, although some very elaborate scripting can give the impression of it as a vehicle you can carry with you. Natively, it can be coded as a weapon (some of the original code remains in the DEFAULT.IDE and WEAPON.DAT files) provided it replaces an existing melee weapon as seen in this mod.

The game also alludes to an unused skateboarder pedestrian who would have likely used the skateboard along with dropping it on death. Only voice lines for this pedestrian exist in the files, which can be heard by assigning VOICE_GEN_WMYSKAT to any existing character in the PEDS.IDE file.

Big Bear himself is obviously not unused, present in a couple cutscenes in the game. However, there is plenty of leftover content from when he played a bigger role.

For starters, there are models of a much fatter Big Bear in both gta3.img and cutscene.img, presumably models that would have been used some time after Beat Down on B-Dup and after his recovery. There is another cutscene model named "csbigbear2", which is a copy of csblue3, which in itself is an unused homie model. 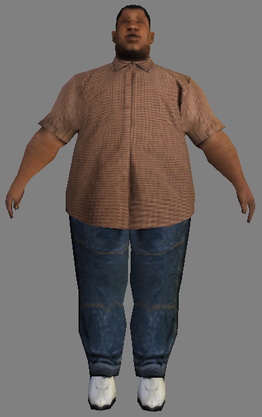 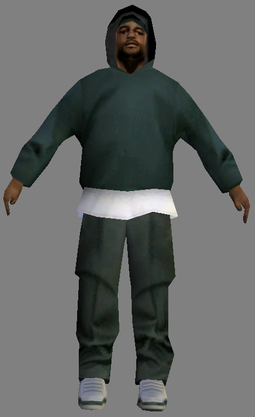 There is much more than unused models for Big Bear, however, as there are also many voice lines and mission dialogue/references that go unused, not only making his mitigated role even more obvious, but also implying he would have been recruitable in some way, with several lines regarding him being back with the Families and engaging enemy gang members.

In default.ide is a section mentioning "old removed weapon models". They seem to be Vice City leftovers.

There is also a landmine that has been left in the game's files since III. While there is a TXD file, it has no texture in it. 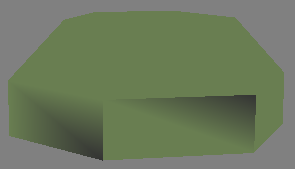 Even though it's called FBI Truck in its DFF/TXD and in-game name, a few references make this vehicle seem like it was supposed to be used by the SWAT, including an entry in the BradyGames strategy guide showing an earlier version of this truck with a mounted gun, claming it's "for SWAT members only". There are SAPD POLICE markings on it, and the cop radio addresses it as a Police Van, like the Enforcer. Unlike the Bloodring Banger B, this car is fully functional.

Another cut FBI vehicle is the FBI Car from GTA Vice City, completely redesigned. The overall look of this vehicle would be recycled for the LVPD police car, but some interesting notes about this car is that the siren is located in the back, there are lights on the grille, and it still uses the VCPD police car interior from Vice City. It only exists as a model located in cutscene.img which would mean it would appear in at least one cutscene. It's unknown if this car would have made an appearance in-game or not.

A copy of the Rancher known as "rnchlure" exists. It's the same as the normal Rancher, but the windows are heavily tinted to obscure the occupants and can't be tuned at all. It can't be obtained by normal means, but can be acquired through a in-game cheat. Note that in the mission Lure itself, a normal Rancher is used. 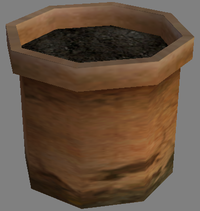 A small flowerpot that, based on leaked strings in the Definitive Edition, is actually a tiny RC car with a camera in it. It would have been intended for a cut mission of the casino heist. It can be spawned with trainers/mods in the original version, and it can actually hold up to two people. It will go through other cars, but operates like a normal vehicle otherwise.

In cuts.img there is a test cutscene called "cuttest" which, as the name implies, is a cutscene made for testing purposes.

The MAIN bank in the AMERICAN.GXT file contains the main bulk of the in-game text, while the mission text is separated into their own. The following text in particular is taken from the original PlayStation 2 version.

Placeholder names for the radio stations. Notably, K-Rose seems to not have been added at this point, with an "early rave" station in its place.

No caller is ever specified, but there is text for when any of the girlfriends are calling.

Text reminding you that Cesar's and Catalina's missions must be completed. While true, it's never used since you have to first complete the missions for any new missions to appear on the map.

Leftovers from the previous two games.

This dat file is found in the data folder. It is a list of which environment artists are responsible for which portions of San Andreas, as split up in a 10x10 grid. The list includes each artist using their Bugstar ID, with Bugstar being Rockstar's internal bug and defect tracking software. This is a list used with debug builds and internal tools to automatically assign a newly created environment bug to the artist responsible for the area it was found in, which is why it is important for the file to use correct Bugstar IDs. Below is a list of the Bugstar IDs used in the file and who they map to.

CJ's gang, Grove Street Families, have several inconsistencies with the name of the gang, likely leftovers of when they would've been named Orange Grove Families (or something along those lines).

Like many games of this scale, there are a myriad of discrepancies and errors present. Nothing game breaking (for the most part), but still annoying to see.

While the location itself isn't unused in the Saint Mark's Bistro mission, there are various chunks of Liberty City not normally seen, including the hospital, Luigi's Club, and some stores. A higher quality version of this was used in The Introduction.