Grand Theft Auto: Liberty City Stories is the prequel to Grand Theft Auto III, taking place in 1998 and starring Toni Cipriani. Though a fair number of content was scrapped compared to other entries, most of it can be surprisingly accessed via trainers. 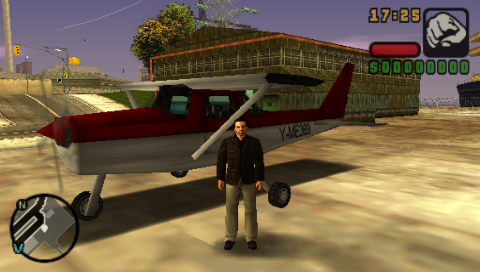 The Dodo plane that is always in the air back in Grand Theft Auto: Vice City is in this game. The DeadDodo is mentioned in handling file and and can be spawned with third-party trainers. However, simply spawning through it without further modifications will crash the game upon spawning. A Dodo can also be spawned with the debug menu and while it does not crash the game, it won't accelerate. 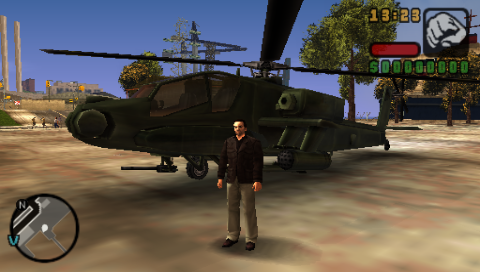 The Hunter attack helicopter is in the game as a leftover from Grand Theft Auto: Vice City, but is never used. It can be spawned during story mission Karmageddon by getting on top of the biggest pyramid opposite police station in Staunton Island and pressing L + Up + Select + Cross. If done correctly, a sound will be heard and the Hunter will be accessible on the helipad on top of Big Shot Casino. 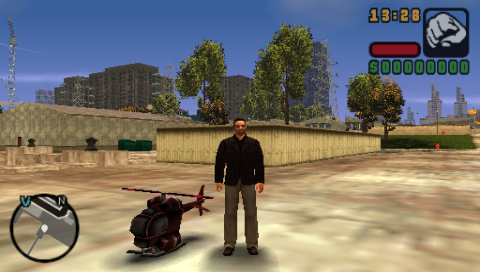 The little toy copter from Vice City was to return, but was cut. It can still be spawned with the debug menu or trainers, but a mod needs to be installed in order to control it. Trying to enter it without further modification crashes the game. 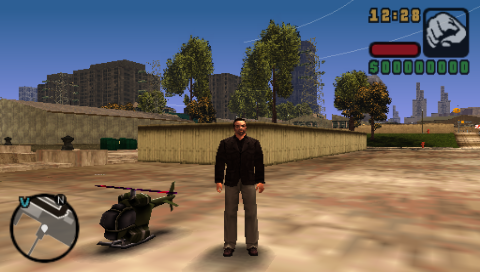 Another toy helicopter that was cut. It can still be obtained through the debug menu or trainers. Trying to enter it without further modification crashes the game.

Yet another leftover Vice City asset, can be obtained with trainers. However, it has no acceleration, suggesting it never went any further than a concept. 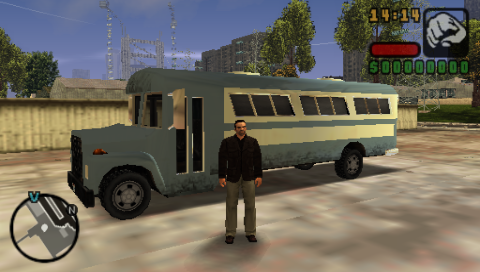 The Bus from Grand Theft Auto III was most likely mean to return. However, it was disabled from spawning and can now only be spawned via the debug menu or trainers.

Another vehicle from Grand Theft Auto III. The vehicle is functional, but the texture mapping is rather buggy and always appears as a black paintjob.

An odd-looking vehicle that can only be found in the iOS/Android versions, which can be modded back into the game as it has the necessary filenames.

An unused and rather gory variant of the Leone Sentinel likely intended for The Made Man. In the final game, a regular Leone Sentinel is used instead.

Like most games from the Grand Theft Auto series Tear Gas is not available normally, but can be obtained through trainers.

Data for the scrapped returning weapon from Vice City can be found in the PlayStation 2 version, but only the texture and HUD icon remains. The icon interestingly contrasts with the other weapons in the game, signifying it may have been cut early in development.

Three placeholder loading screens which can only be found unused in the PlayStation 2 version.

Unused screens for a TV newscast about the closing/opening of the bridges are present on the PS2 disc.

Some leftover debug textures can be found on some .chk files in the PlayStation 2 version.

Police boats are in the game, but never used by LCPD. However, unused quotes for the coast guard can be found in the files.

It seems that the player was originally going to have to pick up a change of clothes at Mr.Benz, instead of the safehouse.

You cannot name your save files in either version.

Radio stations are cycled with the R3 button.

Among the debug text above, the "Sick Fuck" strings from GTA 3 are present.

Most likely an early name for the Rampages or something completely different.

Seems to be all that remains of a cut RC Car mission.

It seems that the assassination missions from Vice City were going to return at one point.

An early Mission Complete theme is present on the disc. It's a clip from the intro cutscene of the game, with the sound effects from the cutscene still there, hinting that it might just have been a placeholder.

There's quite a few Vice City Leftovers to be found.

The radio stations and two assets are listed in ENGLISH.GXT among the Map Legends, oddly enough.

Accessible with the debug menu is this short test cutscene, cuttest. It uses a clip of audio from the beginning cutscene to the Biker Heat mission.

For the German version, many of the changes done were similar to that of Grand Theft Auto III. These include:

Early PSP versions of the game was notable for a buffer overflow exploit in the saved games, opening the floodgates of homebrew programs to be run using specially crafted saves by Fanjita and n00bz. Not only a new firmware was released to patch it (which turned out to be ineffectual for a while), the game was reissued with the exploit fixed; distinguishing fixed and original versions were noticeably difficult, likely to crack down the use of the exploit.

This was an important point in PSP homebrew history.