Speaks for itself. Its model (grenlanc.dff) and textures (grenlanc.txd) are present in the PS2 version.

It's model (steyr.dff) and textures (steyr.txd) can be found as well in the PS2 version.

A returning weapon from Grand Theft Auto III. Model and textures are present only on PC. Its low-quality texture implies it may have been discarded earlier in development.

Just a shorter version of the regular Python in the game (pstsnub.dff/txd) PS2 files only.

Model and texture (coltsil.dff/txd) are also in the PS2 version.

Yet another melee weapon hidden in PS2 files (stungun.dff/txd) 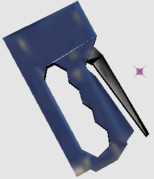 Only present in the files of the PS2 version. (stapleg.dff/txd).

This weapon can spotted on the wall of the Tooled UP shops around Vice City (nailgun.dff/txd) only on PS2.

A shorter version of the MP5 that has a model and an icon (only on PS2) and can be spotted in the intro deal scene. (mp5short.dff/txd) 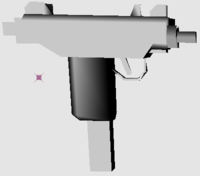 Another planned returning weapon from Grand Theft Auto III, except that the textures are corrupted.

Yet another weapon planned to return, with corrupted textures.

An earlier version of the shotgun, with the model taken straight from Grand Theft Auto III.

Various graphics located in (hud.txd) never appear in the game.

Icons exist for each station (VCN being the only one with a building) in the game. In Grand Theft Auto III and Liberty City Stories, the radio stations are located as buildings around Liberty City, so that may have been intended to be the case in this game.

In the PlayStation 2 version's menu graphics (FRONTEN2.TXD), there is a logo for a deleted radio station, Vice City News, or VCN for short. It's stored among the logos for the other radio stations that you can tune in on the menu while adjusting audio options.

An unused loading screen of Auntie Poulet found in the PlayStation 2 version. Normally, the game does not load long enough to display this image, so it goes unseen. 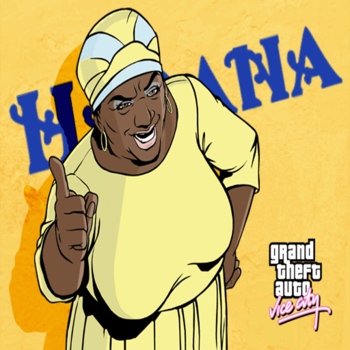 An unused texture of an injured Lance Vance (buddy3.txd), certainly meant to appear in the mission Death Row. 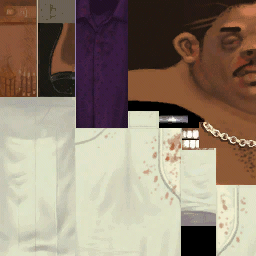 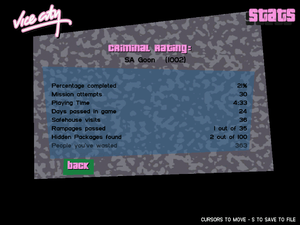 There is a secret criminal rating for the stats page: "SA Goon". It is only displayed if the player's score is between 1000 and 1005, after which it ticks over to the "Goon" rating. Due to the very small window for it to be achieved, it's nearly impossible to see unless one is deliberately trying for it.

The rating is a reference to the Something Awful Forums, the inhabitants of which are dubbed Goons.

The sound used for the pager device in the previous game can be located in the appropriately named "pager.wav". This sound, however, was remade for the intro on the Rockstar North logo.

The timer sound from the previous game was in Vice City's audio files. 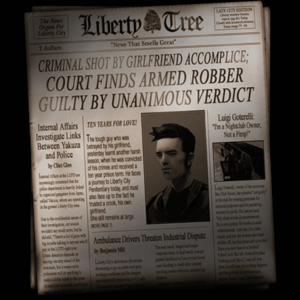 Leftover news headline from Grand Theft Auto III's intro with the filename of news.txd. Exists only on the Windows version.

As the model suggest, this is a leftover from GTA III, though it was probably meant for the import-export garage in Sunshine Autos, since the garage itself doesn't allow to export the vehicles that were listed on the delivery list.

In the game's executable are some rather rude messages, with the first two referring to missing animation(s), and the last one rudely tells that there's nothing to find here.

An array of anti-crack protections are present in the PC version, although barely anyone noticed them due to a successful crack which avoided them coming out three days before release. If the game detects that the SecuROM copy protection has been tampered with, then a number of fascinating after-effects have a chance of triggering: